Western European hub airports’ relative decline compared with their Gulf and Eastern European rivals has been well documented over recent years, but a new study suggests that connectivity has since the 2008 financial crisis suffered a far more deep-seated, structural blow than many realised.

Airport body ACI Europe and think tank SEO Aviation Economics’ Airport Industry Connectivity Report argues that while on the surface all is well at EU airports – total connectivity grew 38% between 2004 and 2014 – the quality of those connections has been poorer since 2008.

In fact, a “structural shift in the nature of this connectivity” means Europe is increasingly linked to the world through indirect connections channelled via non-EU airports, runs the theory.

The study finds that European airports lost more connectivity in 2008/2009 than did their non-EU hubs rivals, while the recovery of connectivity has been slower in Europe and marked by a distinct growth of indirect connections.

The biggest drop in connections from EU airports was within Europe itself, falling 7.4%. This was followed by declines of 6.9% to Asia, 4.9% to North America and 3% to South America. Connections to the Middle East and Africa actually increased, 9.4% and 3.8% respectively. 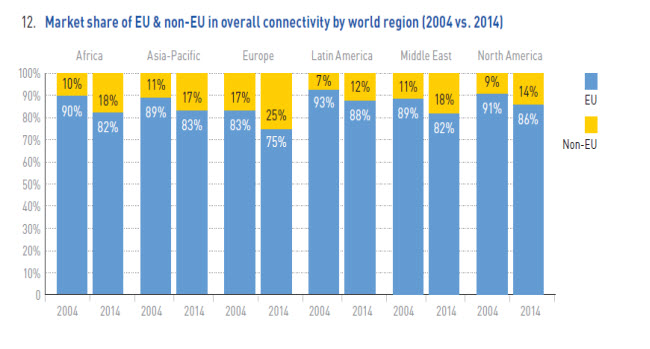 This was in contrast with non-EU hubs. While their connections to Europe declined 3.9% in the same period and links to Asia-Pacific remained flat, there were rises of 23% to the Middle East, 10.4% to Africa, 9.7% to North America and 2% to South America. 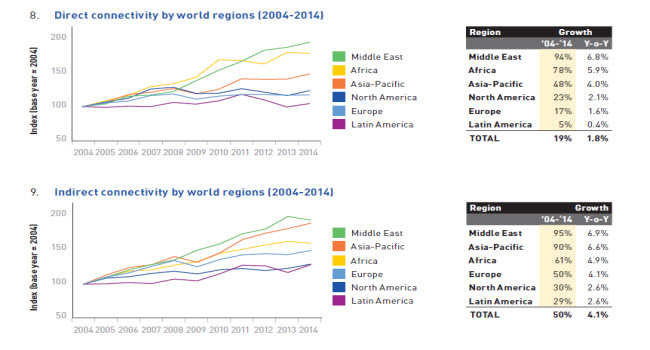 “Today, 62% of indirect connections from Europe are offered through EU airports. European airports have recovered routes, especially at small airports, which was driven by the continued rise of low-cost carriers.”

Over the last 10 years, the share of onward connectivity from EU airports has declined 8%, while those from non-EU airports grew on average 307%, driven by the success of airports such as Istanbul Ataturk, Moscow Shremetyevo and Dubai, amid declines at established European hubs such as London Heathrow, Frankfurt and Madrid. 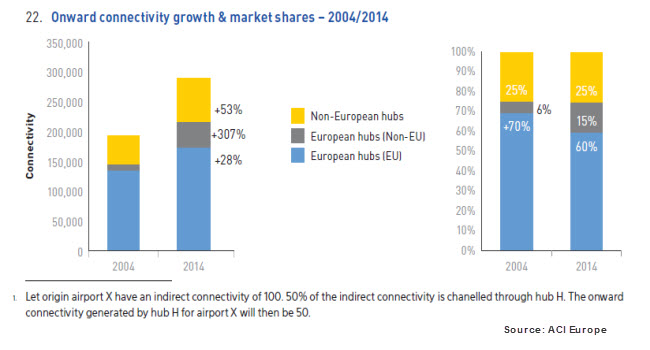 Most indirect connections out of Europe are still channelled via EU hubs, but their share has decreased by 10% in the last decade, reflecting pressure from competing hubs in Turkey, the Gulf and, to an extent, North America.

The top three European hubs by onward connectivity remain Frankfurt, Amsterdam and Paris Charles de Gaulle. However, their collective market share has decreased from 33% to 29% since 2004, and during this time Istanbul Ataturk, Moscow Sheremetyevo and Dubai have all entered the top 20.

“We are at a critical point in our relationship [airports and airlines]. This is coming from outside, we know. We come to realise that connectivity is not a matter of course, and neither is the strength of European airlines, hubs or airports,” said Swiss International Air Lines chief executive Harry Hohmeister at the recent ACI Europe General Assembly in Frankfurt.

Arnaud Feist, chief executive of Brussels airport and president of ACI Europe, is concerned by the report findings and says they should compel Europe’s political leadership to make boosting the continent’s connectivity a policy priority.

“Regional connectivity has especially suffered and is even more at risk in the future. An increasing share of the EU’s connectivity to other world regions is being channelled through hubs in the Gulf as well as other European hubs – and I say well done to Istanbul and Moscow,” he said in Frankfurt.

“EU hubs have been overshadowed by the Gulf hubs in terms of intercontinental connectivity. These findings are alarming and should serve as a wake-up call to our governments but also to the EU institutions in Brussels.

“Decreasing connectivity speaks of slower and less inclusive economic growth for Europe. our report also points to Europe being bypassed as an aviation hub and no longer being the significant player providing global connectivity.”

Feist suggest Europe needs to solve this problem not through “defensive” measures such as restricting non-EU airline traffic rights, but by opening up the European market further through bilateral liberalisation, relaxation of visa rules, and provision of more airport capacity.

“With a freshly elected European Parliament and a new European Commission taking office in the autumn, the time is certainly ripe for a new policy direction,” Feist concludes.