European forces operate a diverse range of aircraft – including unmanned – due to their relatively high, NATO-level defence budgets and involvement in a number of international arenas. But their larger unmanned air vehicles are largely imported due to lack of available indigenous technology. This reliance on foreign supply comes with limits the nations are starting to take note of – and efforts are under way to fill this UAV gap.

For example, unmanned operations by European air forces are mainly centred on persistent surveillance and target acquisition instead of armed operations. This lack of armed capability is not always by choice. A number of NATO nations in Europe operate – or will soon start to operate – the General Atomics Aeronautical Systems medium-altitude, long-endurance (MALE) Predator family of systems. Arming them, however, has been largely restricted by the US government.

However, this situation is changing. The US Defense Security Cooperation Agency (DSCA) announced in February 2015 it would ease restrictions on the export of armed UAVs. The UK is an exception, as the Royal Air Force already operates 10 armed Reapers.

Operated by the UK, France and Italy, with authorisation granted to the Netherlands for a potential sale of four Reapers, the UAV was most recently ordered in February by Spain, which selected to buy four Block 5 aircraft and two Block 30 ground control stations ahead of the Israel Aerospace Industries (IAI) Heron TP system.

While Madrid has revealed a desire to arm its Reapers, the US government has only authorised the sale of surveillance aircraft, with this capability provided by General Atomics’ Lynx multi-mode synthetic aperture radar and a Raytheon electro-optical/infrared multispectral targeting sensor.

Col Enrique Martinez Vallas, former chief of acquisitions programmes for the Spanish air staff, told Flightglobal in November the air force wants armed variants, but noted Italy took ten years to receive authorisation to arm its fleet, and acquiring a baseline surveillance variant was the main priority in the near term.

Italy has been an operator of the MQ-9 Reaper and MQ-1 Predator variants for some time, and in November authorisation was granted by the DSCA to upgrade the MQ-9 surveillance fleet with weapons including the Lockheed Martin AGM-114 Hellfire missile.

“Italy currently operates the MQ-9 system and will have no difficulty incorporating this added capability into its air force,” DSCA noted.

A drive is now evident in Europe for indigenously-developed systems, and while this is largely a sovereignty issue because they heavily depend on systems like the Reaper, there would arguably be more flexibility in terms of payloads carried, and nations would have more freedom to arm systems.

Even the RAF, that operates the armed Reaper, is looking at integrating European weapons onto its systems, including the MBDA dual-mode Brimstone.

END OF THE LINE

The last MQ-1 Predator – the legacy system that evolved into the MQ-9 ubiquitous with military UAV operations – rolled off the production line in December before it headed to the Italian air force. While the MQ-9 is still in production, as is the MQ-1C Gray Eagle army variant, this marks a potential opportunity for other UAV manufacturers to swoop in with a MALE variant.

General Atomics is busy working on the next derivative of the system – a certifiable variant with longer endurance – but European industry is also keen to gain a share of the market. France, Germany and Italy are developing the MALE 2020 UAV, which was pushed through to the governments by industry from each country. Finmeccanica, Airbus Defence & Space and Dassault are involved in the project, which is almost halfway through a two-year definition phase.

The two-year definition study by the companies will serve as a risk-reduction effort for the nations and upon its completion a decision will be made on whether or not to begin production.

“Besides being an answer to European armed forces’ requirements, it will take into account the need to optimise the difficult budgetary situation through pooling of research and development funding,” a joint statement from the three companies said in May 2015. “With a sovereign European development, critical requirements around the certification of drones are inherently built into the programme from the onset.”

A development phase is expected to begin once the definition phase is complete, with deliveries potentially beginning by 2020.

Italy is also supporting the indigenous development of the Piaggio Aero P180 Avanti-derived P.1HH Hammerhead UAV, following an order for six of the type plus three GCSs in February 2015, deliveries of which are expected to start this year. The first export order for the new UAV was placed in March, as the United Arab Emirates committed to buy eight Hammerheads.

Hammerhead is nearing the end of its development phase, with Piaggio collaborating with compatriot Finmeccanica, which is providing the mission control system, sensors, datalink and GCS, making it a system that benefits European industry.

Another ongoing future requirement for UAVs in Europe comes from Poland, which is heavily investing in a wide-range of different UAVs. The “Zefir” programme that is looking to acquire a MALE platform is expected to select between the Reaper and the Elbit Systems Hermes 900 UAV. Although Poland is importing its UAVs, a push is being made to include Polish industry in the programmes.

Elbit is offering its smaller Hermes 450 variant for Warsaw’s ”Gryf” tactical UAV requirement, for which it has joined the Polish Armaments Group. This is rivalling Thales and its Watchkeeper UAV – also derived from the Hermes 450 – which is being offered under a teaming agreement with WB Electronics.

Under the Gryf programme, 12 systems are expected to be acquired, each with four aircraft and a GCS, which will be used for division-level imagery intelligence and armed with rockets, entering service from 2017.

Four Zefir systems comprising three aircraft and a GCS each for operational-level use, are being sought, to be acquired via a government-to-government deal with a foreign contractor. Deliveries would start in 2019, and the aircraft will be armed, with missiles as well as rockets.

Another imported system piquing interest in NATO circles – including by the organisation itself – is the Northrop Grumman RQ-4 Global Hawk.

The high-altitude, long-endurance unmanned aircraft is operated stateside by the US Air Force and NASA, as well as by NATO under its Alliance Ground Surveillance programme. It has also garnered interest from Norway and Germany, although the latter has become a sticking point for the otherwise successful Global Hawk programme.

Under a drive to create an indigenous variant of the platform, Germany started developing an RQ-4 modified with an Airbus payload to create the Euro Hawk. This follows a format familiar to Germany, as it also contracts the IAI Heron UAV under prime contractor Airbus to provide a European twist to the deal. However the programme faced challenges and was overpriced and was cancelled after the first Euro Hawk was built and flown.

The programme has not quite been forgotten though, and Germany’s desire to have an airborne platform carrying a signals intelligence payload – manned or unmanned – remains. The two companies are due to begin testing the payload on the RQ-4-derived Triton UAV, which has factored in solutions to problems such as airspace integration and de-icing that the Euro Hawk programme faced.

“Working with our German partners, we are returning our full-scale demonstrator to flight status and we continue to negotiate with the German air force to prove out that [Airbus] payload that we’re currently under contract with,” Northrop Global Hawk chief Mick Jaggers said in February. “I have a crew in Manching [air base] right now putting that aircraft back into flight status.”

One unmanned area in which European industry is likely to succeed, if the governments formulate tangible requirements for such systems, is unmanned combat air vehicles. A number of programmes are under way which are helping to explore the technology, namely the UK’s BAE Systems Taranis, the pan-European Neuron and the Anglo-French Future Combat Air System (FCAS) programmes. 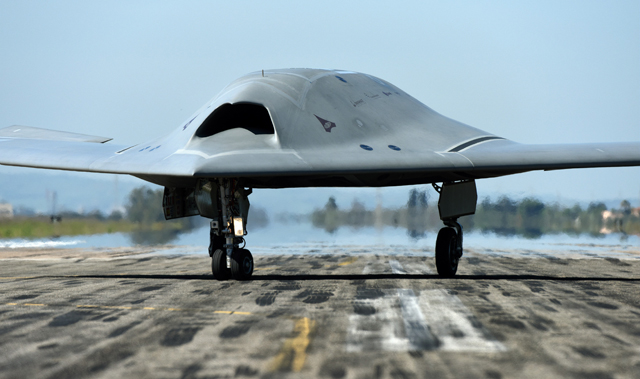 Like BAE's Taranis, the Dassault-led Neuron programme is a bid to develop a stealth combat UAV

France has a mix of imports and exports in its UAV fleet; it has purchased the Reaper from the US, but also selected the domestically-developed Sagem Patroller for its tactical requirement in April 2015.

France is involved in a large number of pending UAV developments – MALE 2020, FCAS and Neuron – seemingly in a push to break away from the dependence on imported systems.

Turkey, meanwhile, is developing an indigenous rival to the Reaper, the Turkish Aerospace Industries Anka.

Driven by a desire to avoid dependence on the Israeli technology that formed the bulk of its UAV fleet, Ankara has been working on Anka for years, and it most recently carried out its debut operational flight with the Turkish armed forces, which have ten of the type on order.

The system has a synthetic aperture radar/ground moving target indicator payload, and a satellite communications-enabled variant is expected to be developed.

While there is no obvious export for the system in Europe, Anka has reportedly received interest from other nations, including Egypt, which at one point was expected to purchase 10 of the type.