In the months before the May 2015 AUVSI Unmanned Systems exhibition in Atlanta, the US Federal Aviation Administration had issued its proposed ruling on the operation of small unmanned air vehicles in national airspace. In this draft ruling, the administration suggested UAVs weighing 25kg (55lb) and below would be able to operate up to altitudes of 500ft in daylight, as long as they remained in line of sight of the operator, and that the operator had passed an aeronautical test.

The ruling was largely supported by stakeholders who are currently limited in how they can operate in an airspace effectively closed for UAVs, but it may take a couple more years to enforce. This is especially true considering the number of changes made to FAA regulations on UAVs since it was proposed.

One change came about in February when the FAA announced it was to scrap its original proposal on micro UAVs – those weighing 2kg and less – in favour of a more proportionate risk assessment.

In the proposed ruling, weight was the determining factor but Michael Huerta, FAA administrator, claims this has now been reconsidered.

“Based on the comments about a ‘micro’ classification submitted as part of the small UAS [unmanned aerial systems] proposed rule, the FAA will pursue a flexible, performance-based regulatory framework that addresses potential hazards instead of a classification defined primarily by weight and speed,” Huerta said.

“[The FAA] has determined that further engagement with industry and stakeholders is needed before conducting rulemaking to address the regulatory framework for micro-UAS,” the agency adds. 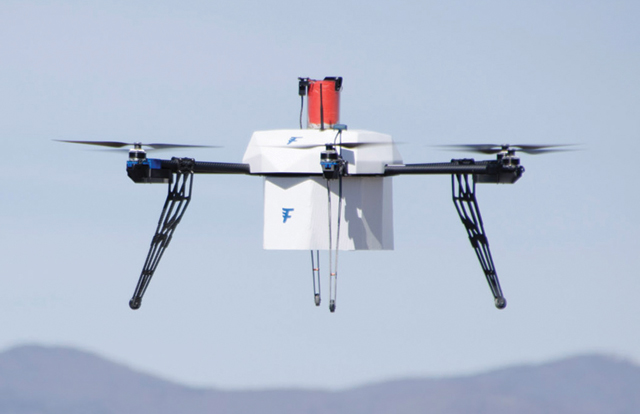 In a Nevada test, Flirtey claims to have made the USA's first autonomous package delivery

To address this, Huerta has formed a committee of stakeholders to discuss the proposed regulations before issuing a final report to the FAA. This new assessment would align US small UAV regulations more with those being proposed in Europe, which are based on risk.

The European Aviation Safety Agency, meanwhile, is in the process of implementing a basic regulation that splits UAVs into either open, specific or certified categories, based on the risks posed. The permissions each UAV can operate under will then vary depending on the risk determined, so rules are proportionate to the threat.

This has been heralded by many interested parties as a progressive approach to regulation – albeit not without challenges – and the US seems to have adopted some of the logic behind it.

One such area in which the US does differ however, is in its 2015 decision to introduce mandatory registration for UAVs. “All owners of small UAS used for purposes other than as model aircraft must currently obtain a 333 exemption, a public certificate of authorisation or other FAA authorisation to legally operate, in addition to registering their aircraft,” the administration says.

“Registration is an important tool to help us educate aircraft owners and safely integrate this exciting new technology into the same airspace as other aircraft operations,” Huerta adds.

The registration is mandatory for UAVs weighing between 250g and 25kg, for all US citizens or those with permanent residency aged 13 and over, at a cost of $5. Not following the rules comes with high penalties, as aerial photography provider SkyPan International discovered; the FAA is trying to impose a $1.9 million fine on it for unauthorised work.

The administration claims, between 21 March 2012 and 15 December 2014, the company conducted 65 unauthorised flights in congested airspace and near heavily populated cities, which violated airspace regulations and operating rules. “These operations were illegal and not without risk,” it adds.

This is the largest penalty proposed on an unauthorised operation, and resulted from violations against the requirement for air traffic control clearance and from flying UAVs that did not carry a two-way radio, transponder and altitude-reporter. None of the flights were carried out with the required airworthiness certificate and registration, or a Certificate of Waiver or Authorization (COA) for the operations.

“SkyPan operated the aircraft in a careless or reckless manner so as to endanger lives or property,” the FAA claims.

In March the FAA announced it was to increase the altitude at which commercial operators that carry a Section 333 exemption for flying UAVs can operate at. The exemption is an interim measure imposed until the small UAV law is enforced, which allows commercial operators to fly UAVs within certain parameters. It is effectively an exemption from manned aviation rulings that require certain specifications, such as aircraft certification. As of 30 March, 4,400 exemptions had been granted.

A previous “blanket” COA for flight at up to 200ft had been granted for those with a Section 333 exemption – anything higher had to be authorised under an additional COA – and the FAA has now raised this to 400ft. The exemption covers small UAVs operated for commercial use, which can be flown at the newly-designated altitude as long as they adhere to permit regulations such as not flying in prohibited areas or near large cities. The UAV has to weigh less than 25kg and be operated within line of sight of the user.

“This is another milestone in our effort to change the traditional speed of government,” Huerta says. “Expanding the authorised airspace for these operations means government and industry can carry out unmanned aircraft missions more quickly and with less red tape.”

While the operational altitude is not quite at the 500ft touted under the proposed small UAV ruling, the doubling of this operational spectrum demonstrates a progressive attitude taken by the FAA to help facilitate use in what is currently a relatively limited environment.

However, not all interested parties are feeling the progression that the FAA is demonstrating.

One significant push in the US market is for UAVs to be used for parcel delivery, although the lack of progress in beyond-line-of-sight operations, either now or in future, suggests this is not going to happen any time soon. Lots of projects are in embryonic test stages internationally, not least online retailer Amazon’s Prime Air effort, launched in 2013, which has garnered lots of interest and many a headline. Couriers such as Swiss Post, DHL and La Poste have all carried out small test programmes using UAVs to deliver parcels, and while Amazon is investing in the technology for this too, it is struggling to gain the correct authorisation to carry out testing in the US. 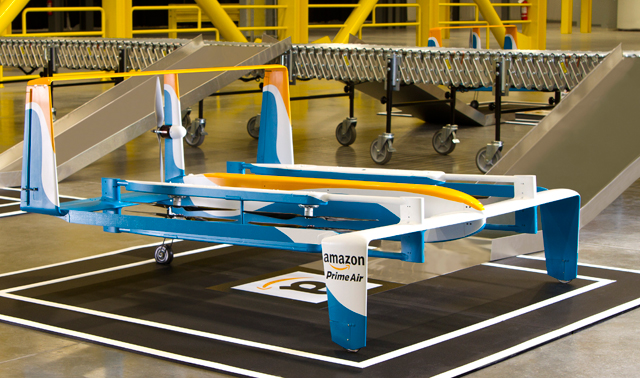 This has been attributed by Amazon to the slow response by the FAA in granting the permissions required to the test vehicles Amazon is developing, which subsequently leads to authorisation being granted to out of date systems.

One progression in the US market, however, came in March when UAV manufacturer Flirtey carried out what it claimed was the first autonomous package delivery in US airspace. A six-rotor system delivered a package of water, food and first aid during the test at the Hawthorne, Nevada test site, which was approved by the FAA.

It was a relatively low-risk event carried out under close human supervision, but chief executive Matt Sweeney claims it was a “major achievement”, which will take the US “closer to the day that drones make regular deliveries to your front doorstep”.

In March the FAA released its aerospace forecast for 2016 to 2036 and, unsurprisingly given the activity surrounding the integration of the systems, a large portion was allocated to UAVs. It estimates small, hobbyist UAV purchases could grow from 1.9 million in 2016 to 4.3 million by 2020, while sales of UAVs for commercial purposes are expected to grow from 600,000 in 2016 to 2.7 million by 2020.

“Predictions for small UAS used in the commercial fleet are more difficult to develop given the dynamic, quickly-evolving nature of the market,” it adds.

“Both sales and fleet size estimates share certain broad assumptions about operating limitations for small UAS during the next five years: daytime operations, within visual line of sight, and a single pilot operating only one small UAS at a time.”