ANALYSIS: For Ryanair, training is a base issue

Ryanair may already be a very big airline, but its plans to double in size during the next 10 years mean its appetite for skilled employees will continue to be voracious.

Significantly, when the Max is introduced it will be the first time in its modern history that Ryanair has had to deal with differences in pilot training – a part of its operating philosophy has always been that every aircraft in the fleet is identical. Chief executive Michael O’Leary says he hopes the “differences course” will be performed by the pilots through computer-based training alone, but this has yet to be determined and may turn out to be wishful thinking.

In October this year Ryanair’s first multi-crew pilot licence (MPL) cadets will begin their courses. Offering ab initio cadetships is a first for the airline, and everyone wonders whether the decision is a sign that this, the ultimate low cost carrier, is being forced to recognise that pilot supply is no longer guaranteed.

Things are changing out there. Hungary-based Wizz Air now promises cadets a job from the start on condition they are successful in their courses, then pays its new pilots their salary from the time that type-rating training begins. That may once have been standard in the industry, but it has not been for many years. And EasyJet is beginning to underwrite student pilot loans. These things are not changing by accident.

But Ryanair chief pilot Capt Ray Conway says there is no reduction in the numbers of pilots applying for jobs with the carrier, claiming that the airline’s five days on, four days off roster is a vote-winner, as is the predictable lifestyle conferred by the airline’s base structure – all crews return every night to their home base.

Ryanair head of training Capt Andy O’Shea says his airline has not seen any signs of reluctance to sign up: “We see no shortage of applicants for our cadet type-rating programme. We are fully booked, with named students up to our own six-month horizon, and our database is full for future assessments. We are also recruiting direct entry F/Os [first officers] and captains, and partly due to a lot of work in the administration of base and contract allocation, this programme is also very successful. We are also seeing a notable level of applications from pilots who have previously left us for Middle Eastern airlines, Norwegian and other EU-based operators.”

O’Leary adds that the Gulf carriers have been picking off “experienced first officers and young captains, but now about 50% of them want to come back”. He also predicts that, in the Ryanair of the future, more of its pilots will be on direct contracts rather than the notorious self-employment contracts.

O’Shea adds: “Salaries, job security, expansion plans, career opportunities, roster patterns/leave availability and the ability for us to locate pilots in their preferred bases are proving very attractive to the global pilot population.”

Ryanair has 72 bases, the latest being Ponta Delgada in the Azores. Pilot pay and contracts are set according to base agreements. In fact, the bases are the centre of a Ryanair pilot’s working life, the place where he or she interfaces with the organisation, except for functions such as recurrent training, which are centralised.

But, Hickey explains, although the devolution of local management to bases is an essential part of the Ryanair system, “we don’t have independent republics”, he insists. Oversight and standardization are firmly centralised, but each base has a manager, a base captain, a type rating examiner, a cabin crew supervisor and an engineering supervisor. Base captains, who are active line pilots, operate to a routine that makes them available at the base one day in each week for pilots who want to talk about their job and life. 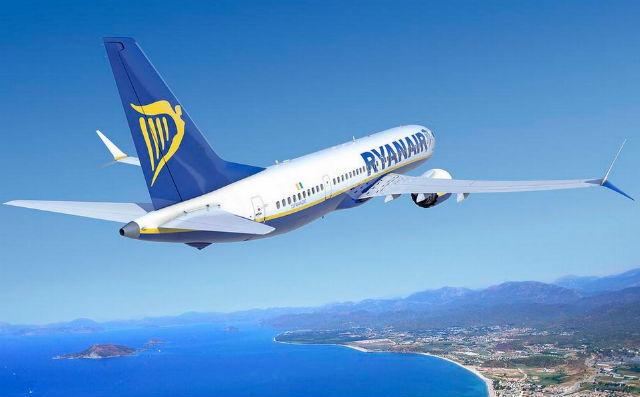 Conway points out that keeping the bases operating to identical standards is crucial. This is a fact that was highlighted clearly when the airline brought in operational flight data monitoring (OFDM) in 2004. Differences in interpretation and practices became apparent. Ryanair’s reaction was to launch a system of flight operations roadshows that visit every base regularly, and this still happens. Therefore, although each base is set up to provide local supervision and personnel support, the base personnel can see that HQ has not forgotten about them, despite being far from Ryanair’s Dublin headquarters. “Communication,” insists Hickey, “is key.”

There is also a local air safety group at each base involving all line employees, and at least one of these represents the base at quarterly safety forums held at Stansted, UK.

O’Leary says the future will see the base concept strengthened, with cadetships being promoted locally. In a Ryanair recruit’s early days, however, the young pilots are expected to be flexible and to operate from various bases, to ensure the airline retains the ability to adjust to varying local market demand and so the new pilot gains experience through route variety.

The central component of Ryanair’s assessment of all pilots that want to join the carrier is a simulator ride in an advanced FSTD (Flight Simulation Training Device) with an electronic flight instrument system (EFIS) cockpit, sharing it with another applicant. Pilots are provided with all the details of what will be expected of them well in advance, and with all the flight planning information they will need, plus attitudes and power settings for key phases of flight. The two pilots are given time to brief each other before the trip, which is flown largely using raw navigation data, and using the simulator as a generic twinjet rather than a specific type. The trip is simple and short, usually entailing a departure from an airport and a course to fly before returning to it.

The pilots, taking turns as commander and co-pilot, are assessed for aircraft management skills, situational awareness, handling capabilities and crew co-operation. O’Shea says almost 50% consistently fail despite being the products of approved commercial pilot licence/instrument rating (CPL/IR) courses at licensed air training organisations (ATO). The question the industry has to ask itself, he says, is why such a high proportion of pilots with a recently won CPL/IR fail.

O’Shea suspects one factor may be the inadequacy of the add-on courses intended to prepare CPL/IR pilots – who are trained to pass a test as a single pilot in light piston twins – for flying in the airline environment. These include courses in multi-crew co-operation (MCC), crew resource management (CRM), jet orientation (JOC) and line oriented flight training (LOFT). O’Shea suspects these may be inadequate in the way they are delivered, because although the pilots may already have licences that make it legal for them to occupy a seat in a commercial airline flight deck following a type rating course, about half of them are clearly not ready for flying as part of an airline crew in jets.

O’Shea is a key member of a working party called the EASA Aircrew Training Policy Group (EATPG) whose purpose is to bring the airlines, the training industry and EASA together to determine what to do about this apparent mismatch between the ATO product and the airline need. Two other principal members on the group are EASA’s certification director Trevor Woods and the highly experienced European training industry consultant Peter Moxham. The group has met three times this year so far, and will meet again in November, hopefully to present a solution. This may include a way of integrating the post-CPL/IR add-on courses to make the total package more effective. O’Shea says there are some ATOs whose graduates usually pass Ryanair’s competency test, and they are the ones whose CPL/IR courses embody concepts like CRM and LOFT from early in the programme.

The MPL course embodies all those concepts, and a type rating on the aircraft the graduate will fly in airline service is an integral part of the MPL qualification. Perhaps that is why Ryanair intends to launch selected cadets on an MPL course in October.

The Royal Aeronautical Society’s forthcoming International Flight Crew Training Conference (23-24 September) has been designed this year to address – among other things – the same issues being confronted by the EATPG, and O’Shea will be delivering the keynote address. The IFCTC conference chair, CTC’s chief commercial officer Anthony Petteford, intends the event to bring students and wannabe pilots, ATOs and airline training chiefs together to thrash out what each party expects of the others, and how it could best be provided. Unlike other training events that are mainly about bringing buyers and sellers together, the RAeS has been running this conference for five years with the intention of finding a magic formula to solve the myriad training issues judged to be relevant in an era where a significant killer is loss of control in flight.

Despite the hard work of numerous groups studying aspects of training policy and practice under the RAeS’ watchful gaze, it gradually became clear that there was no magic formula or – more to the point – nothing that everyone could agree on. At the conference this time, Petteford wants to see the three stakeholders – aspiring pilots, ATOs and airlines – vigorously debating where they are now, and where they want to go.

The other issue the conference will examine is how a fast-growing airline industry will procure the increasing numbers of pilots it needs from a training industry that may not have the capacity to supply them, especially without a plan for increasing the number of instructors that can deliver competency-based training. Petteford does not see Ryanair’s confidence in the adequacy of the pilot supply being justified in the medium term, let alone the long term.

Petteford does, however, see a need for a greater degree of trust and cooperation between ATOs and airlines, which he believes will make their relationship more productive. Change is already beginning, he says. Airlines that have traditionally rigidly insisted on conducting type ratings and command upgrade courses in-house are now contracting them out to ATOs, which Petteford sees as a sign of increasing trust. “The airlines are listening now,” he says, but the growing awareness needs to translate into action.

Petteford maintains that the industry, to prevent future pilot shortages, has to do more to promote itself to the “pilots of the future” at school level, not waiting until the college or university stage. The RAF and other air forces have formation display teams like the Red Arrows to fire up youthful imagination, but at present, he says, the airlines do virtually nothing in an era where other lucrative high-end industries are competing for the attention of young people at schools. Petteford warns that the airlines are leaving this entirely to the ATOs at present, and that will not be sufficient to generate interest in aviation as a career among enough young people.

On the executive and engineering recruitment side Ryanair has an active graduate scheme. Hickey says Ryanair can tout its rampant corporate expansion plans as an attraction to the ambitious engineering graduate who wants early promotion and a promising career structure, and he says that vision is certainly attracting high calibre recruits at the moment. But on the pilot side, according to Conway’s thesis, the five on/four off roster, plus the chance of an earlier command than the legacy carriers can offer, is enough to attract the pilots.

There are other long-term pilot supply issues Petteford raises. As a result of the rate at which pilots build flying hours with low-cost carriers such as Ryanair, he says the industry is sailing into unknown seas. Pilots in their 40s will have built the kind of hours total that would normally have taken a lifetime’s career to build, and their physical and mental reaction to that is difficult to predict. Will the industry be witnessing regular pilot burnout? Or will these super-experienced individuals wish to retire from piloting and do something else? Petteford says he cannot guess the reaction, but it would be foolish to disregard the risk.