Europe’s bid to establish its own satellite navigation ­system has suffered a setback when a launch failure stranded the fifth and sixth satellites of what is to be a 30-strong constellation in a useless orbit.

However, both the European Space Agency and European Commission are confident the programme remains on track to provide essentially full services from 2017 using 24 satellites, and to have the complete, 30-satellite constellation – including six ­orbiting spares – flying by 2020.

Initial indications showed the 22 August launch from Kourou, French Guiana to be a success – but ongoing telemetry following separation of the satellites from their Soyuz rocket’s Fregat upper stage revealed them to be in the wrong orbit.

Launch operator Arianespace – which has appointed an independent commission to evaluate this “major anomaly” – says the spacecraft should have been placed in a 29,900km circular orbit inclined at 55˚. However, the pair are instead in an elliptical orbit, with eccentricity of 0.23, a semi major axis of 26,200km and inclined at just 49.8˚.

According to ESA, the satellites are not useful for navigation in their current orbit. They are, however, pointing at the Sun and safely under the control of the European Space Operations Centre (ESOC) at Darmstadt, which is “working day and night” to assess its options.

In principle, the spacecraft could use their own propulsion to achieve the correct orbit. However, Franco Bonacina, spokesman for ESA director ­general Jean-Jacques Dordain, says it is unlikely that course of action will be deemed worthwhile. The satellites each carry 70kg of propellant intended for station-keeping during their 12-year lifespan, and using it up for a major change of orbit is probably pointless.

Another possibility is that ESOC may be able to devise “some tricks” to be played by ground stations to recover navigational functions.

A final option, says Bonacina, would be to take advantage of a rare opportunity to conduct what ESA calls a “technology mission”. This would involve using the two ­Galileo satellites for the sort of extreme, in-orbit stress testing that would never be done with an operational spacecraft – but which can give insights into ­system performance beyond what can be achieved in ground testing.

In any case, all parties are ­looking for a quick resolution to ­Arianespace’s inquiry, in order to keep the next Soyuz Galileo ­mission – scheduled to orbit two more satellites – on track for a ­December launch.

The push to get Galileo in action will step up next year, with the first of three flights of a modified Ariane 5 ES launcher, capable of orbiting four of the navigation satellites at once. Including December’s mission, four more two-satellite Soyuz flight are also scheduled.

The satellites are supplied by Germany’s OHB-System, with navigation payloads built by ­Airbus Defence & Space’s Surrey Satellite Technology unit. ESA’s Bonacina notes that a decision had been taken to extend serial production to include six spares – for 30 units in total – as this was cheaper than buying insurance against failures. 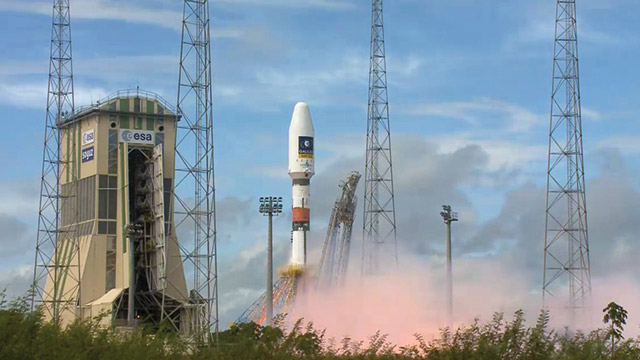 Meanwhile, European Commissioner Ferdinando Nelli ­Feroci says the Commission has set up an internal task force to monitor the situation, but stresses: “I remain convinced of the strategic importance of Galileo, and I am confident the deployment of the constellation of satellites will continue as planned.”

Brussels sees Galileo as a critical element in a broader European imperative to maintain independent access to space and space services. The EU currently co-funds the system with ESA – which acts as its design and procurement agent – but will take over when Galileo reaches an operational stage. According to the Commission, apart from independent control of what has become an indispensable modern technology, Galileo will deliver around €90 billion [$119 billion] to the EU economy over the first 20 years of operations.

The logic behind achieving ­independent control of satellite navigation is well-founded in ­experience. Following the 9/11 ­attacks on New York and Washington DC, the USA put pressure on Europe to abandon a programme which, it feared, would give enemies free access to s­atellite navigation services.

While the US GPS system is widely used for civilian purposes, it is designed, maintained and operated by the military. However, Galileo was conceived from the start as a civilian programme to end the US monopoly.

Reports at the time indicated that Galileo – which had only just been approved by Brussels – was nearly killed off by US concerns over security.

However, Europe pressed on, and despite technical delays and funding difficulties that have left the programme years behind schedule, Galileo is finally on the cusp of offering initial services.

Meanwhile, Russia’s ­Glonass has also come into operation, and both China and India are working on their own, independent navigation constellations.