As Lufthansa is expanding its Wings family of low-cost subsidiaries and Air Berlin is restructuring its business with a reduced fleet and network, European budget carriers are targeting a greater slice of the German travel market.

The continent’s largest economy is thorny terrain for airlines. Despite its size and central location with easy access to neighbouring countries – such as Austria, the Benelux region and the Czech Republic – Germany is a fragmented market. Unlike largely centralised nations, such as France and the UK, where the incumbent carriers can focus on the capital hubs, the federal republic consists of a patchwork of cities and regions with high economic activity and travel demand.

While Air France and British Airways can rely on much of their traffic to originate from the metropolitan areas around their respective Paris and London bases, Lufthansa depends on transfer passengers at its Frankfurt and Munich hubs to maintain its route network. The majority of travellers come from cities such as Berlin, Dusseldorf and Hamburg. Yet it is at those secondary airports where Lufthansa is increasingly facing competition from low-cost carriers and, in the long-haul arena, Middle Eastern airlines.

The ongoing transfer of Lufthansa’s European routes outside the Frankfurt and Munich hubs to low-cost arm Germanwings is not only aimed at stemming declines in the mainline’s point-to-point traffic – the move should generate savings of around €200 million ($267 million) and return the continental operations to profitability by 2015 – but is also an attempt to keep competitors at bay at the crucial secondary airports. 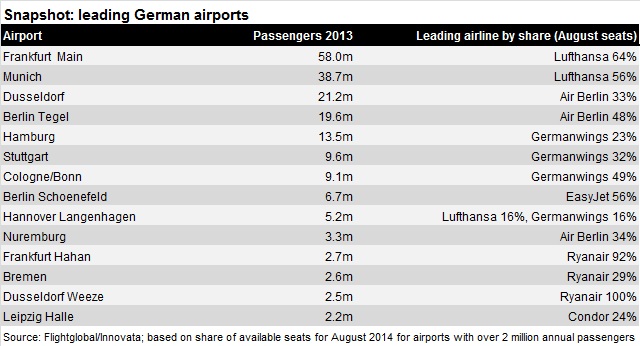 After taking over its parent’s routes, Germanwings has expanded its network especially to leisure destinations since the operational rejig began in 2013. In Hamburg, the number of routes nearly doubled from 28 Lufthansa-operated services to 52 Germanwings routes today. That increase includes seasonal flights and discontinued Lufthansa services, such as a link to Moscow. Some 14 aircraft are stationed in Germany’s second-largest city.

Dusseldorf is meanwhile becoming the largest base of Germanwings, while the airline is headquartered in nearby Cologne. Some 25 aircraft will be stationed in Dusseldorf when the transfer is completed in 2015. Certain routes have been cancelled, including services to Helsinki, Lisbon, Oslo and Tel Aviv. But a number of new destinations have been added, including Italian port cities Ancona and Brindisi as well as Bastia on the French island of Corsica. Germanwings’ greater focus on touristic destinations is aimed at greater fleet utilisation during weekends and attracting a “new” market segment in Dusseldorf, the city’s airport says.

Lufthansa was cautious to largely withdraw its mainline from Hamburg and Dusseldorf for fear of affronting local business clientele. Both cities are key economic hubs, with Dusseldorf being at the heart of Germany’s most populous state in between the Ruhr area conurbation and Cologne.

In 2011, Lufthansa wanted to switch flights to Germanwings in Cologne, Hannover and Stuttgart only. For Berlin – where the market has long been dominated by low-cost carriers – the airline had different plans with locally based Airbus A320s and cabin crews on temporary contracts. But in 2012, Lufthansa decided to roll over all non-hub traffic to Germanwings, and introduce a three-tier ticket system roughly corresponding to conventional business and economy classes with an additional no-frills tariff to compete with thoroughbred low-cost carriers.

EasyJet established its second German base in Hamburg with two A319s in September 2013, and has meanwhile added a third aircraft. While it coincided with Lufthansa’s withdrawal from the city, the airport argues that the UK carrier’s move – which added 15 routes to the existing six – was a response to Air Berlin’s cutbacks in Hamburg rather than an assault on Germanwings’ business. Air Berlin slashed 10 routes between 2011 and last year, although the carrier still has as many as eight aircraft based in the city. However, as EasyJet is increasingly focusing on business travellers, it does not appear to be a coincidence that the carrier set up its Hamburg base just as Lufthansa withdrew from the city.

Norwegian and Spanish budget operator Vueling have also started flights to Hamburg. The airport says the increased low-cost activity has led to “significant” growth even “beyond expectations” for the current year. But whether that expansion is sustainable has yet to be seen. “At the moment, there is a lot of capacity in the market,” an airport spokesman says. “EasyJet, Norwegian, Germanwings and Vueling have stepped in and are now observing the market. If their moves pay off – and it very much looks like it at the moment – then they will probably consider further developments.”

EasyJet has also added an aircraft to its Berlin base, bringing the total to eight. Chief executive Carolyn McCall said in May that Germany was – along with France and Switzerland – the main target for the airline’s capacity growth during summer 2014.

Meanwhile, in Cologne – an airport that has always struggled to attract mainline carriers, in Dusseldorf’s slipstream – Ryanair will establish its fifth German base with a single Boeing 737 in October. Five routes will be added to the existing three.

In 2013, Cologne airport lost around 500,000 passengers largely as a result of Lufthansa’s withdrawal and Air Berlin’s capacity cuts, its operator says. Airline insolvencies, especially in the tourism segment, were also a contributor to that decline, but other leisure carriers mostly compensated the capacity losses, the airport says. Cologne’s total passenger number declined 3.6% to 9.08 million travellers last year.

Air Berlin had made “sometimes drastic” cutbacks over the past years, the operator says. It adds, however, that the Oneworld carrier has meanwhile increased again capacity for the summer 2014 schedule.

This appears to be necessary to maintain market share in Cologne, as low-cost carriers have set sights on Germany’s fourth-largest city. Norwegian – which started flights to several Spanish destinations in October 2013, and has since added an Oslo link – and Germanwings have become the main drivers for a 4% increase in passenger numbers during the first half of 2014, the hub says.

Stuttgart airport is taking a more conservative view on the low-cost trend, however. The southwest German airport – which serves a key industrial heartland with companies such as Bosch, Daimler and Porsche – had already been Germanwings’ second-largest base before the takeover of Lufthansa’s point-to-point network, and thus became the first airport and testing ground for the transfer.

While Germanwings has since introduced a small number of new destinations, the airport argues that the route additions were not a result of Lufthansa’s move to the low-cost arm. “They would have come either way,” a spokesman says. “If a route is profitable… then it will be operated [no matter whether it is a budget or network carrier].”

The gateway is not aiming to attract airlines with airport fee discounts for the sake of network expansion. “It doesn’t make sense to grow at any price, if it is not profitable for the airport,” he says. “It has to be sensible for the airline, passenger and airport.”

Greater focus on touristic routes appears not to be on the agenda of Stuttgart airport either. The current schedule already has “great seasonality” which shouldn’t be further increased, the operator says. Classic network connections to major European cities – used both by business and leisure customers – will thus remain the mainstay of the route network. But that is a challenge as Stuttgart is sandwiched between the major hubs in Frankfurt, Munich and Zurich, all of which are within a 200km (125mi) radius.

Meanwhile, Air Berlin has shed some light on the next phase of its restructuring programme. The carrier – in which Abu Dhabi’s Etihad Airways has a 29% shareholding – wants to concentrate on point-to-point traffic in Europe with a smaller fleet and a “much more focused route network”, says chief executive Wolfgang Prock-Schauer.

Capacity is to be cut by 10% between this and next summer’s schedules, with the fleet size being cut by a further 10 aircraft. Air Berlin had 144 aircraft at the end of June. However, the fleet had already been slashed from 170 aircraft in 2011, as part of two earlier efficiency programmes.

Productivity has been raised through greater aircraft utilisation. Despite the smaller fleet, capacity grew around 3% during the second quarter of 2014 compared with the same period last year, as frequencies were increased on popular routes. This strategy is to be pursued further in future. Aside from co-operating closer with Etihad and new partner Alitalia, Air Berlin wants to concentrate on routes with high demand for high-frequency flights from its 10 largest airports in its home region of Germany, Austria and Switzerland.

The carrier also wants to restructure its operational set-up, which comprises a number of subsidiaries and partnerships. These span the part-owned Austrian and Swiss subsidiaries Niki and Belair respectively, regional arm LGW, and a co-operation with leisure carrier TUIfly. All will be assessed for their operational efficiency. To remain part of the Air Berlin umbrella group, “each platform must make a positive contribution”, says Prock-Schauer.