ANALYSIS: Global Hawk prepped for next decade of service

The Northrop Grumman RQ-4 Global Hawk is an aircraft finally coming into its own. Having first flown on 28 February 1998, the unmanned aircraft is nothing if not resilient.

Despite numerous attempts to kill the programme in favour of other high-flying spy planes, such as the manned Lockheed Martin U-2 and perhaps other classified air vehicles, the operational tempo of the US Air Force’s 32-strong RQ-4 fleet has risen 365% since 2011, Northrop claims.

Spurred into action by the air force’s decision in 2011 to halve its radar-carrying Block 40 order to 11 aircraft, the defence firm got serious about improving the type's performance and reducing its operating and sustainment costs – and now it's reaping the rewards.

The programme has bounced back since 2012, when the Pentagon proposed mothballing the entire fleet of multi-intelligence Block 30 variants in favour of the Lockheed Martin U-2S as a belt-tightening exercise after the wars in Iraq and Afghanistan began winding down, and the so-called Budget Control Act became law.

The budget books are now tipped in Northrop’s favour and the U-2 is being targeted for retirement some time after 2019. Lockheed is now pitching its own drone – TR-X – which would be constructed with harvested U-2 and RQ-4 components like engines and sensors.

In a significant reversal of fortunes, Global Hawk has gone from being a candidate for the scrapyard to a having robust development and modernisation programme totalling $2 billion up to 2021.

That sum is reflected in the air force’s most recent budget request, for fiscal year 2017, and it includes funding for sensor enhancements, cybersecurity protections and the installation of weather radar and engine inlet de-icing systems, to allow it to detect and avoid storms and fly in adverse weather. The Airborne Signals Intelligence Payload (ASIP) is also being upgraded to Increment 1 standard. 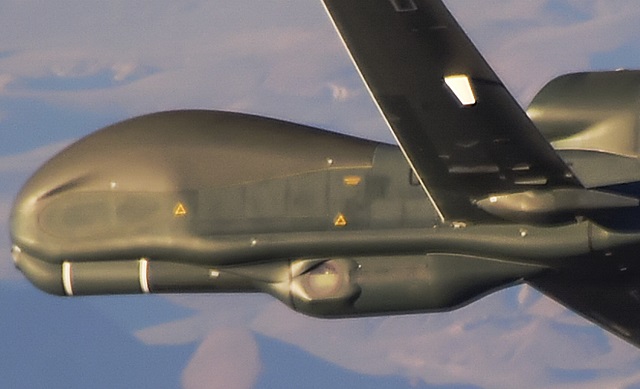 In a major step forward for the modernisation programme, the air force put Northrop on contract to upgrade an undisclosed number of Block 30 aircraft with the company’s universal payload adaptor.

The modification was pitched by Northrop as way to save the Global Hawk by re-hosting specialised sensors traditionally carried by the manned U-2S, specifically the Senior Year Electro-Optical Reconnaissance System-2C (SYERS-2C) and Optical Bar Camera (OBC).

Those payloads are being validated on the Global Hawk, as is the service’s next-generation multispectral sensor: the UTC Aerospace Systems MS-177.

Northrop’s RQ-4 vice-president and programme manager Mick Jaggers told Flightglobal, in an interview on 13 April, two RQ-4s have received payload adaptor changes under a co-operative research and development agreement (CRADA) signed in July. “That was done via Northrop Grumman’s contribution and the US Air Force has put us on contract to do additional airplanes," he says.

The SYERS-2C first flew on the Global Hawk in February. In a recent demonstration, the sensor snapped an image every 90 seconds for a total of 237 pictures. The sensor worked as well on the RQ-4 as it does on the U-2, says Jaggers, despite claims by some the sensor's performance would be reduced on the RQ-4 because of a lower cruise ceiling of 60,000ft – 10,000ft lower than the Dragon Lady. 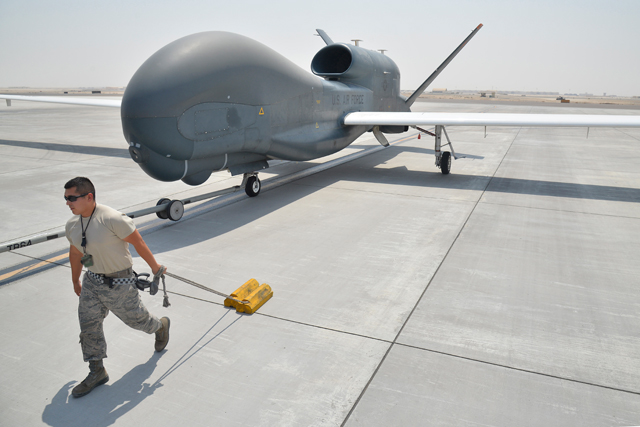 “A very, very successful flight,” Jaggers says. “We were able to pass down the imagery as if it was going to be used operationally [to a distributed common ground system].

“With the SYERS-2, the pictures have just been incredible – great resolution, great capability. I don’t see any loss of capability.”

Having demonstrated the SYERS-2, versions of which have been carried by the U-2 since the 1960s, Northrop is turning its attention to the OBC and MS-177. It expects to begin a series of flight tests with the OBC – a wet-file camera used for treaty verification missions – in August or September, and the company is still finalising an agreement for the MS-177 demonstration.

An air force spokesman confirms in an email the MS-177 will be delivered to Northrop in July for testing and integration purposes. A second sensor will be provided in January.

“The current plan is that it will be hosted on the Block 30 airplanes,” adds Jaggers. “It requires that universal payload adaptor that we demonstrated on the sensor re-host CRATA.” 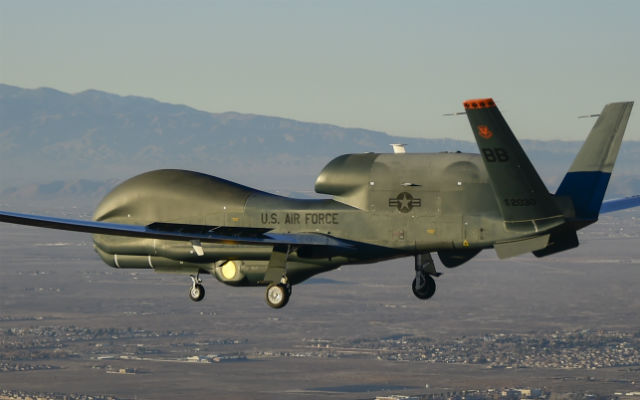 Not too long ago, the air force estimated it would cost upward of $487 million and take five years to modify the Global Hawk to carry U-2S sensors. A closer examination in 2015 found it to be much less expensive, and Jaggers says the contract awarded in late March to modify more Block 30s is a testament to the company’s commitment to the RQ-4 system.

“There was a lot of turmoil about what it was going to cost,” he says. “Northrop Grumman knew we could do this effectively as well as cost-consciously through the demo.

“If you think about it, we have met every milestone, every date, and every opportunity with resounding success. Because of that success, the air force has now seen fit to award Northrop Grumman a contract to move this forward, not only with legacy sensors, but we’re re-hosting the next-generation sensor [MS-177] that currently no other airplane is flying.”

Jaggers says the programme has come a long way in three years, and there’s further to still travel. He’s looking forward to completing the weather radar installations in 2017. There’s also ice shape testing to be done that will qualify the aircraft to fly in certain atmospheric conditions.

Northrop and the air force are essentially ticking off a laundry list of modifications the aircraft should have naturally received over its life cycle but didn’t because of its uncertain future.

The Global Hawk programme was born of a US Defense Advanced Research Projects Agency (DARPA) technology demonstration that was transferred to the air force in 1998.

It was conceived by Teledyne Ryan Aeronautical, a company that had been pioneering high-altitude, long-endurance drones since the AQM-98A Compass Cope-R that set a world record for an unmanned aircraft in 1973 by flying for more than 28h. Northrop bought the company in 1999 and it quickly became an invaluable reconnaissance tool for America’s decade-long "war on terror" without much more systems engineering. In 2000, the service launched a programme of record for 63 Global Hawks, almost equal to the number of MQ-4C Tritons required by the US Navy for extended-range maritime patrol. However that number was truncated at 45. 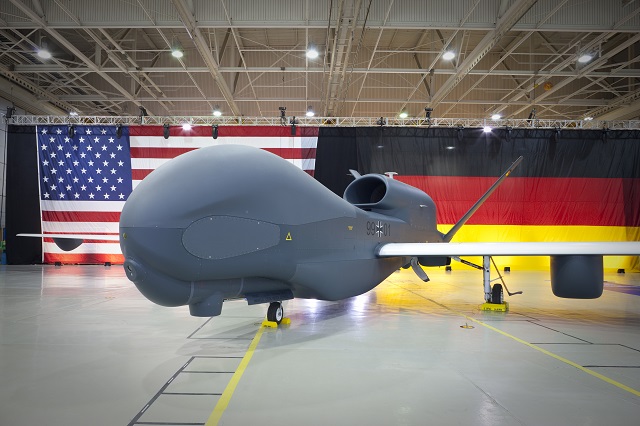 Now the programme is on a firmer footing domestically, Northrop is making progress putting the “Global” into Global Hawk.

The first air vehicle rolled out in 2009 and took flight in 2010 but the programme was terminated in 2013 because it lacked a collision avoidance system and was deemed unfit for European airspace.

Times have changed, however, and now Northrop is preparing the Euro Hawk to fly again. The company is also preparing to deliver the first of five NATO RQ-4B Alliance Ground Surveillance (AGS) aircraft equipped with the “MP-RTIP” surveillance and target tracking radar. The aircraft will be stabled at Sigonella air base in Sicily, with IOC expected next year.

In Asia, Northrop has sold four RQ-4s to South Korea and plans to deliver two in 2018 and two in 2019. There are two Korean suppliers contributing cable harnesses as well as brackets and other fixtures.

“The first Korean industry partner has delivered successfully its first part,” says Jaggers. “We are achieving our cost and schedule milestones, set by the Republic of Korea, and are looking forward to delivering its airplanes on or before its schedule.”

The deal with Japan is yet to conclude but is making its way through the government-to-government foreign military sales process. “We look forward to starting up a successful programme as soon as we receive the notifications from the US Air Force,” says Jaggers.

Global Hawk fuselages are built in Moss Point, Mississippi and are delivered to Northrop’s Palmdale, California site for completion. The line has plenty of work ahead of it between South Korea and Japan and with the final three Block 30s to remain active until 2020.

“It’s a very bright outlook for Global Hawk,” says Jaggers. “It’s a very good design, and we are just now understanding the true utility of the system.”

Note: This story has been updated to correct the delivery years for South Korea's Global Hawks.