ANALYSIS: How airlines are losing weight in the cabin

Losing weight remains a key priority for aircraft seat manufacturers as they strive to meet demands from airlines for ever-lighter economy class products. A new player aims to shake things up this summer with the planned launch of the first aircraft seat to be made largely from titanium, which it claims will be the lightest on the market.

But with incumbent manufacturers sceptical about using titanium because of its high cost, it remains to be seen whether French upstart Expliseat has broken a path for the material of the future.

Expliseat plans to prove the competition wrong when its part-titanium, part-composite seat starts flying with launch customer Air Méditerranée in June. The company’s chief operating officer, Jean-Charles Samuelian, says that at 4kg (9lb) per passenger the seat is “twice as light as any other seat”, and will result in annual fuel savings of between $300,000 and $500,000 per narrowbody aircraft.

Airlines will also be able to shave their maintenance costs due to the “simplicity” of the design, which is comprised of 30 components, versus “over 200” on competing economy class seats, according to Samuelian. He also claims the seat is the “slimmest on the market” at less than 2in (5cm) thick, meaning passengers gain an extra 2-3in of leg room. Pitch ranges from 27in to 33in, but he points out that because of its thickness “a 28in pitch would feel like 30in to the passenger”. 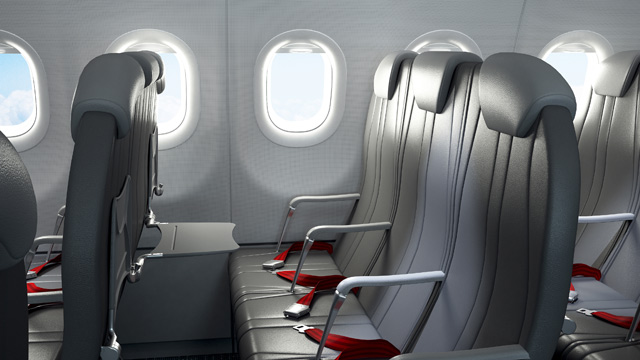 Samuelian insists that passenger comfort is not compromised by the thinness of the seat. “We have been working for more than 12 months to develop the best shape for the backrest so that it relieves vibration on the vertical column,” he says, adding that Expliseat will “work with customers to pick the cushion and softness they want”. The company is keeping its patented technology close to its chest, with Samuelian declining to disclose how much of the seat’s frame is titanium and how much is composite, although he says that a “marginal” amount of aluminium is also used.

Expliseat has been certified as a seat designer by the European Aviation Safety Agency (EASA) but the titanium seat has yet to be fully certified. “It has officially passed all the tests and we’re expecting [EASA] certification to be finalised in the coming weeks,” says Samuelian. Launch customer Air Méditerranée plans to install the seats on all 10 of its Airbus A321s, beginning with a single aircraft which will be retrofitted in time for a June launch. The remainder of the fleet will have the seats installed after the summer season.

Other seat manufacturers are holding back on launching titanium seats of their own, citing the high cost of using this raw material. Doria De Chiara, business development manager at Italian seat manufacturer Geven, says that titanium is “extremely cost-prohibitive”, noting: “Titanium represents a significant weight reduction but it’s not just a matter of it being expensive. Titanium is very brittle and tough to certify. We don’t know how reliable this material is going to be – that’s the big question now.”

De Chiara describes titanium as being “a whole new world” but says more research is needed before any commitments are made. “We’re looking into it but like other established seat suppliers, it’s on the backburner for us,” she says.

Germany’s Recaro Aircraft Seating has used titanium “for a couple of parts” in its newest long-range economy class seat, the CL3710, says chief executive Mark Hiller. The seat weighs less than 12kg and will start flying with an unnamed launch customer on a Boeing 777 in the third quarter of this year. Like Samuelian, Hiller is coy about disclosing what proportion of the seat is made from titanium, but he says it is used in “some structural parts”, alongside aluminium alloys and fibre reinforced plastic. 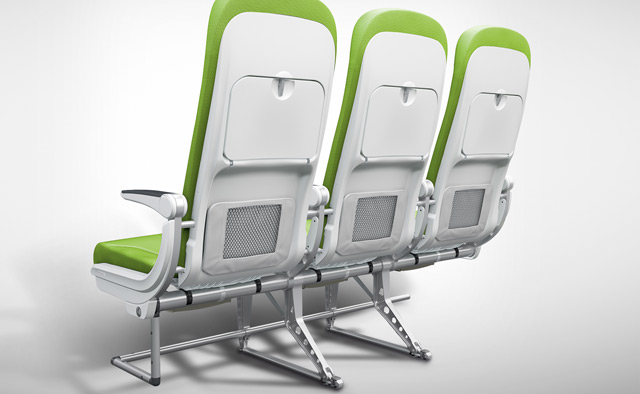 Expliseat’s Samuelian believes concerns over the cost of titanium are outweighed by the savings airlines can realise once the seats have been installed. “Thanks to the fuel savings this is the shortest payback we can do,” he says. While he declines to say just how much more a titanium seat costs than its aluminium counterparts, Samuelian notes that it is “far less” than double the price. “We’re at the upper end but we’re not very different from the competition,” he says.

In addition to launch customer Air Méditerranée, Expliseat is “in final discussions with more than five airlines”, says Samuelian, with “more than 30 others in the pipeline”. The seats are so far only available for Boeing 737 and Airbus A320 family aircraft, but the company is looking into the possibility of developing a titanium seat for widebodies. “Some customers have said they’re interested in our technology for long-haul,” he says.

Recaro’s lightest short-range economy class seat is the SL3510, weighing in at 9.1kg per passenger fully loaded, but it has designed a concept seat that weighs 5.4kg. The Stingray, as it is known, incorporates “all the lightest materials available at this time”, says Hiller. “We didn’t consider cost, we just did a study to show what is possible in weight reduction. We’re trying to take over some of our concepts year by year into production and, in the long run, we assume the weight of a short-range seat could be about 5kg.”

Despite the apparent reluctance of other seat manufacturers to work primarily with titanium, all are in agreement that taking weight out of their products remains the name of the game. However, passenger comfort is becoming increasingly difficult to ignore, meaning for some that it is not just a race to the bottom to provide the lightest possible seat at all costs.

Cameron Allen, commercial director at UK-based Acro Aircraft Seating, acknowledges that “absolutely everyone wants a lightweight seat”. But he adds: “The other direction is the pursuit of comfort. Passengers are becoming increasingly sophisticated and they know who has the best seats.”

Acro’s lightest economy class seat, the Superlight, has recently been “refined” for delivery to US budget operator Spirit Airlines. Spirit earlier this year placed an order for 5,000 Superlight seats in a deal valued at £6 million ($10 million). The latest design features a “smaller, less complicated” latch-free tray table, which is sufficient for holding “a cup of coffee and an iPad”, says Allen. “Short of removing the table, that’s as far as we can go.”

“There are lighter seats around, we know that,” notes Allen. However, Acro believes it makes up for this by providing low-maintenance seats which offer robustness and comfort in addition to being lightweight.

While reducing weight remains “one of the main drivers” behind Recaro’s designs, Hiller also stresses that “the other major driver is comfort”. The CL3710 includes a redesigned headrest which can be adjusted “by 6in up and down” and an integrated neck support which he says will eliminate the need for passengers to bring travel pillows on board with them.

Geven is also positioning itself as addressing weight and comfort concerns simultaneously. “The primary trend is weight but the world is dividing into the part that wants the rock bottom seat and the other part that’s saying, ‘give us some comfort back’,” says De Chiara.

“There’s a limit to the extent of weight reduction you can achieve with the viable materials of today, but we don’t believe in the exaggeration we’ve seen. We’re going to give you the best compromise in terms of comfort and weight but we’re not going to go to the extremes that some have.”