ANALYSIS: How Boeing and Pan Am created an airliner legend

In April 1966, a gentleman's agreement ­between two visionaries – backed by a pair of huge US corporations – created a transportation icon that would have far-reaching implications for the airline industry and travelling public alike.

That historic day 50 years ago was when Boeing and Pan Am bosses Bill Allen and Juan Trippe signed a £190 million deal (equivalent to $530 million in 1966) for 25 Boeing 747s; in 2016 dollars, the deal was worth about $3.9 billion, or $155 million per aircraft. In one fell swoop, the industry giants had planted the seed to create the world's first widebody airliner, ­delivering an order-of-magnitude reduction in seat operating costs, range and noise levels.

But the two US heavyweights would ­endure very different fortunes in the ensuing decades. As Boeing and the 747 went from strength to strength, Pan Am, which would remain inextricably linked to the airliner it shaped, entered a gradual decline and disappeared within a quarter of a century. 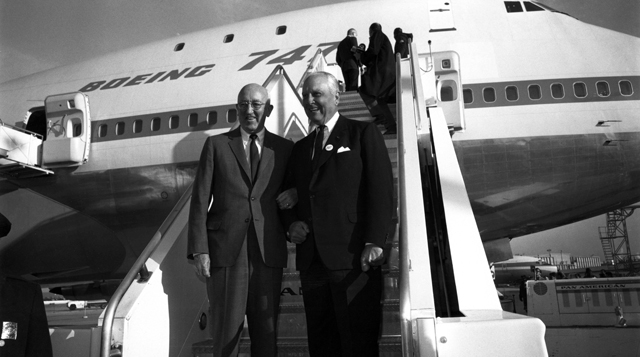 The significance of the day was not lost on Flight International, which recorded the deal under the headline, "Boeing 747 ordered" (21 April 1966 issue).

"To future air transport commentators, 13 April 1966... will undoubtedly count as one of the major turning points in the evolution of the business," ran the story. "The Boeing 747 is expected to have operating costs per seat and per tonne-mile up to 40% lower than existing subsonic jets under comparable circumstances."

The scribe amusingly added that the 747 and other proposed giant airliners "will continue the vulgarisation of worldwide travel to an extent beyond the capability of existing aircraft".

That the 747 even happened when it did was remarkable, given the obsession the airlines and manufacturers had at the time with supersonic transports (SSTs).

"Many of the airlines were convinced that the SST was coming," the 747's original chief engineer Joe Sutter told Flight International's John Bailey in a 1989 interview to mark the roll-out of the 747th Jumbo. "And many ­people here at Boeing thought that the 747 was an aeroplane with a limited future, ­because the SST was going to take all of the business. I even had difficulty getting people to work on the 747. People would come up to me and say: 'Keep working on the 747, and when you get done, there might be a place for you on the SST.'"

Back in 1966, Flight International's editorial team was less convinced by Boeing's commitment to its model 2707 Mach 2.7 airliner. The 747 launch story concluded that "the question which must surely arise is whether the Boeing 747 is a nail in the coffin of the ­American SST".

The catalyst for the 747 was Boeing's loss to Lockheed in the C-5 US military airlifter programme. Sutter told Flight International in 1989 how on the day Boeing learnt it had been unsuccessful, he was recalled from vacation to begin studies into a high-capacity jet transport: "I was given about 100 engineers, and we put a brochure together. We looked at three sizes, 250, 300 and 350 seats, and then we made a pretty rapid circuit of the key airlines. Most of them leaned towards the higher size."

A solution based on Boeing's original jetliner, the 707, was quickly dismissed after Sutter and his team concluded that it "looked like a halfway job" and that it "wouldn't last very long".

So studies that led to the all-new model 747 began, quickly focusing on a novel idea. Rather than a double-decker with two narrower fuselages, one above the other, Sutter's team decided to go with a single deck that was more than double the width of ­contemporary aircraft.

But persuading the irrepressible Pan Am boss that a wide single-deck, rather than a double-deck standard body, was the way to go, did not prove easy. In his book 747, Sutter explains how colleague Milt Heinemann ­unravelled a 6.1m (20ft) length of clothesline to illustrate to Trippe and his management team just how wide the 747's single deck would be. "Incredulity registered on the faces of Trippe and his people," wrote Sutter.

Speaking just ahead of the 747's introduction (Flight International, 21 August 1969), Pan Am's vice-president of service Harold Graham explained how the widebody cabin seating configuration was decided: "The ­designers asked us how many seats abreast we could sell. The figure of nine-abreast came up because it gave us the best combination of passenger groups. We have a row which runs like this: window, three seats, aisle, two seats, central partition, two seats, aisle, two seats, window. In this way the fewest possible people have a middle seat." 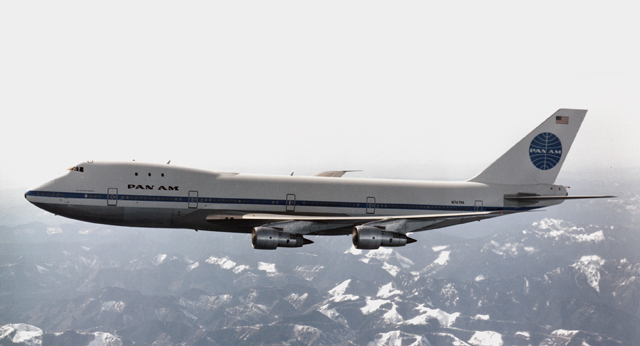 Pan Am pioneered 747 services in January 1970, between New York and London

So the 747's design crystallised as this giant airliner, configured with a wide, twin-aisle cabin that would become the benchmark for all future big jets.

Malcolm Stamper, who was the original vice-president and general manager in charge of the 747 and, with Sutter, a key architect of the jumbo jet, talked to Flight International's Bailey in 1989: "I remember everyone looking at Bill Allen down the table, and it was his call, whether to bet the company on it." Stamper went on to be Boeing's vice-­chairman and passed away in 2005.

"The size of the aeroplane itself was not that much of a technological breakthrough – it was the fundamental scale of the project. I think it was the largest single industrial ­undertaking in the history of the country."

Even with the 747 launched, the spectre of an SST quickly obsoleting the big jet loomed large. To hedge its bets, Boeing designed the 747 to carry containerised freight and incorporated a hinged nose for the main deck to allow straight-in loading. This resulted in the cockpit being located above the main deck, creating the 747's distinctive hump.

When Trippe noticed the unused space in the hump behind the cockpit earmarked for crew-rest, he insisted it be converted into a first-class lounge. Thus another touchstone of the 747 was created.

By the time the first 747 emerged in Everett, more than 150 orders had been secured from 26 customers, comprising key North ­American airlines and flag carriers from across Europe, Asia and Australasia. But as Stamper recalled back in 1989, the 747's debut coincided with a downturn in fortunes for both Boeing and the air transport industry: "Every time that you plan a new aeroplane, it's a good time economically. The airlines are right behind you in saying that they need more capacity, better engines, more fuel efficiency," he said.

"When the aeroplane comes out, ­almost inevitably there is a recession, and ­nobody has any money to buy them. The ­arrival of the 747 was no exception."

Despite the industry slowdown, Boeing stuck with its plan to initiate 747 production at a flurry, delivering an incredible 200 aircraft during the first three years of production. Although the 747 quickly proved itself in service, the recession had caused demand for new airliners to collapse and Boeing's earnings declined by $73 million in one year.

Over 18 months, Boeing’s Seattle employment fell from 104,000 to 38,500, and Sutter, who by now was running the Everett division, saw his workforce cut from 25,000 to 4,000. "Nobody wanted to fly. If the recession had gone on six more months, the programme could have gone down the tubes. It could have wiped out Boeing," he told Flight International in 1989.

But despite the storm clouds at the start, the 747 went from strength to strength. The engine selection was broadened from the original Pratt & Whitney flavour to incorporate all of the "big three" powerplants as Boeing ­developed the big jet's performance capabilities. Deliveries passed 500 in 1980 and reached 1,000 in 1993, by which time a ­second-generation development, the 747-400, was well into production.

"This was the era when the USA led the way, so the fact Pan Am, TWA, American, Delta, United all ordered the 747 meant that European and Asian airlines also had to, to compete," says Richard Evans, senior consultant at Flightglobal's Ascend division. "Almost all markets were regulated, so there was little or no fare competition and airlines had to compete on image and service. There was nothing else available that had even transatlantic range, until the [McDonnell Douglas] DC10-30 entered service."

The arrival of the Airbus A380 in the mid-2000s stole the 747's crown as the industry's biggest airliner, but Boeing countered in ­November 2005 with the launch of the 747-8 family. This major development incorporated a stretch, new General Electric GEnx engines and a revised wing and – like the original 747 – included passenger and freighter variants.

Unfortunately for Boeing, the new family has not managed to match the appeal of the original 747 and sales have been sluggish in an increasingly competitive market where its own stablemate, the 777-300ER, has proved to be the dominant player.

Evans says that the broader product line-ups from Airbus and Boeing, as well as the move towards a liberalised airline market, changed the demand dynamics for the 747.

"Airlines now focus on cost and network, far more than service and image. The 747-400 was the premium long-haul aircraft well into the liberalised era, but the Atlantic saw fragmentation with 767s," he says. "The 747-400 ruled the trunk routes until the 777 entered service, offering much more cargo space. The A380 then hit the final nail in the coffin, by becoming the flagship aircraft for all the airlines that have bought it." 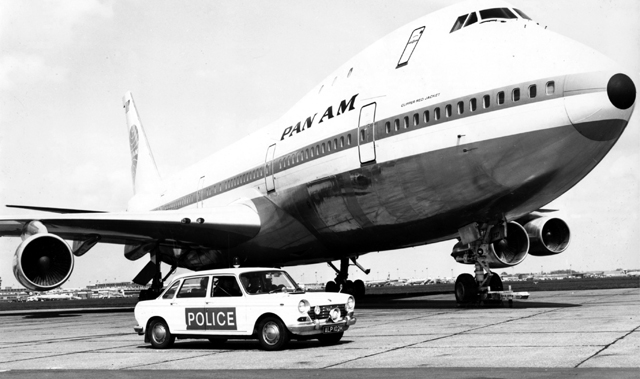 By early this year, 747 deliveries had reached 1,520 aircraft, but with a backlog falling to less than 20, production is slowing to half an aircraft a month in September. Across the life of the 747 programme, annual production has averaged over five times that rate.

"The backlog of 19 aircraft includes [the now defunct] Transaero Airlines in Russia, and there are questions over other commitments as well," he adds. "It seems only a matter of time before Boeing decides to terminate production. But whenever that decision is ­finally taken, the 747 will always be judged as a significant success for Boeing."