ANALYSIS: How Embraer attracted a global audience to the KC-390 roll-out

Towed through a haze of green and yellow smoke depicting Brazil’s national colours and accompanied by columns of fireworks, the civilian-marked KC-390 exited Embraer’s construction hangar in Gavião Peixoto into an apron spot located directly in front of guests at a roll-out ceremony on 21 October.

The event unequivocally showcased Embraer’s political clout as much as the new aircraft, with the presence of the defence ministers of three of the four industrial partners – Brazil, Argentina and Portugal – as well as the commander of the Czech air force being present. They sat side by side with nine foreign ambassadors to Brazil, the commanders of the nation's air force, army and navy and two of the launch country's prior air ministers.

One of the eight foreign air force commanders present at the event mentioned the “new year” as the scheduled date for the KC-390's first flight. However, before crossing this next milestone the aircraft still has to undergo systems verification trials and ground tests, including vibration testing. 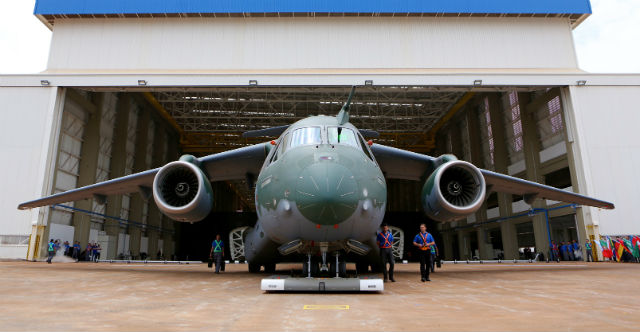 In his presentation, Paulo Gastão, Embraer's programme director for the KC-390, highlighted the design's unique characteristics, which he says include short-field performance and the ability to land on semi-prepared landing strips – such as those with surface irregularities like bomb-damage and repaired tarmac. The new aircraft also features fly-by-wire in a closed loop system, reduced pilot workload, system-limited command to avoid pilot-induced accidents and sidestick controllers.

In a bold decision, just two prototypes will be used for the type’s two year certification programme, with two other complete airframes to be used for static tests and a further two for fatigue testing. Certification will be divided into two stages, covering the initial green aircraft and subsequent complete aircraft phases.

The prototype was not opened for the media to see the aircraft’s interior. However, Gastão says the cockpit is complete and has been powered up, and the cargo compartment is already instrumented to allow for the monitoring of certification flights. “Its interior is as ready as the exterior you got to see,” he adds. 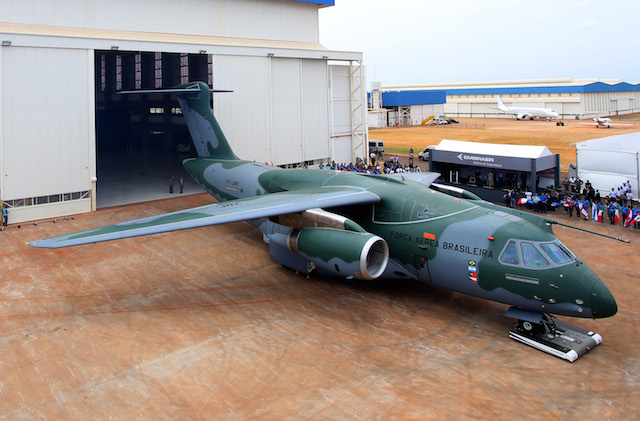 The roll-out is a significant milestone following the Brazilian air force's signature in May 2014 of a firm order for 28 aircraft. Embraer launched its industrial programme in 2009 after signing a memorandum of understanding with the service, which has financed the full development programme – including the two flying prototypes. Because of this, the air force owns the intellectual property of the KC-390, and is set to receive royalties from any aircraft its manufacturer exports.

The two development prototypes will be converted by Embraer to production standard and delivered to Brazil as operational airframes 29 and 30, the company says.

Gastão says the perceived market for aircraft in the KC-390's category is around 700 units over the next 15 years, and that Embraer expects to capture an undisclosed percentage. International industrial partners Argentina, the Czech Republic and Portugal have previously announced an intention to operate the tanker/transport. Despite also having signed letters of intent to purchase the type, Chile and Colombia will not be part of the industrial co-operation that will build it.

Having been hit hard by the USA's ban of 2006 on Super Tucano sales to Venezuela, Embraer's development strategy with the KC-390 has been to leverage the use of civilian components, such as the International Aero Engines V2500 turbofan engines used worldwide on Airbus A320 airliners and the business jet-tested Rockwell Collins Pro Line Fusion flightdeck.

Even if Embraer officials deny this in public, the KC-390 is being developed to be a worthy modern-day successor to Lockheed Martin's C-130 Hercules. According to Gastão, “all the missions currently handled by the Hercules are being addressed by the Embraer product development team, beyond the more traditional missions.

“One area we think the KC-390's speed and range will be very attractive will be as a special forces delivery/support aircraft,” he says.

Although Embraer formally declined to name potential clients for its military transport, a row of inconspicuous national flags representing guests from more than 32 countries could be construed as clues. Besides representatives from regional neighbours there were visitors from more distant locations, such as Kazakhstan, Mexico, Poland, Qatar, Saudi Arabia and Suriname.

Asked about the Swedish air force’s interest in the KC-390, chief of staff Maj Gen Micael Bydén mentioned the transport as “a good option for replacing the service’s six remaining C-130H, with a decision being expected very soon”.

“This is certainly one sexy plane from our perspective,” Bydén adds.