ANALYSIS: How Iran's aerospace dream began and ended with the licence-built IrAn-140

When the sole airworthy HESA IrAn-140 turboprop crashed on take-off from Tehran in August, Iran’s hopes of becoming an aerospace-manufacturing nation appeared to crash with it. The decade and a half following Antonov’s decision to licence production of its An-140 to Iran has seen no more than a dozen IrAn-140s roll off the assembly line, no fewer than four accidents involving the type and a regulatory ban on all flight operations by the aircraft.

The first IrAn-140 made its maiden flight in 2001. Since then, just 11 more airframes have been manufactured and Iran has struggled to find enough customers to make the programme commercially viable. The aircraft was billed as being a symbol of the Iran’s achievement in the aviation industry. But the history of the IrAn-140 programme has been peppered with safety concerns, complaints from Iranian aviation experts about the licence-production contract, and the weak performance of the aircraft.

The story began back in 1974, when the Iranian government held an international tender to manufacture a helicopter under licence in Iran. Agusta, Sikorsky, Aérospatiale and Bell Textron participated in the tender, and the latter won because of its experience in Iran’s helicopter industry in the 1960s. Iran Aircraft Manufacturing Industries (HESA) was established in 1975, with the primary goal of licence production of Bell 214 utility helicopters.

Bell designed a plan to construct a helicopter factory, and the first phase of the build started in 1978. But the project was cancelled after the Iranian revolution of 1979, when just 30% of the facility had been completed.

Fast-forward to 1995 and the Iranian Defence Industries Organisation (DIO) had a change of heart and decided to hold a tender for licence production of a regional 50-seat turboprop. Several companies, including Antonov, CASA, Ilyushin, Aerei da Trasporto Regionale (ATR), Tupolev and Saab, decided to, or were invited to, participate, but international sanctions and political pressure left Antonov as the sole candidate.

Poor economic conditions in Ukraine meant that Antonov was ready to meet all of the Iranian government’s needs for licence production of the An-140, even though production of the aircraft was still in its initial phase and the efficiency of the An-140 was unclear. Many Iranian civil and military aviation experts were against the project, believing that the government was risking investing millions in an aircraft which had yet to fly. 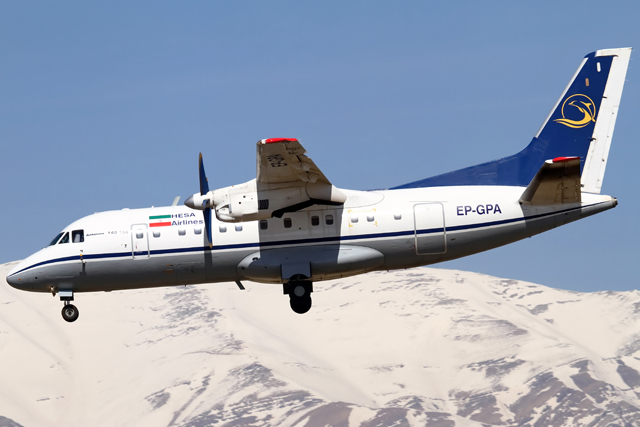 But the Iranian regime pressed ahead, determined to prove that it remained unhindered by US sanctions. On 17 September 1997, the first prototype of the An-140 flew – at the same time, aircraft assembly lines at the HESA factory in Shahin-Shahr were still being completed. The following year, the first knockdown kit of an An-140-100 was delivered to HESA and final assembly was performed by Iranian and Ukrainian mechanics in Iran.

Three years later, on 8 February 2001, the maiden flight of the first IrAn-140 was performed during a ceremony at Shahin-Shahr, three days before the 23rd anniversary of the Islamic revolution. During the ceremony, the Iranian first vice-president and minister of defence and Ukraine’s prime minister made speeches about the achievement, which was described as being the dream of the Iranian people.

The second licence-built IrAn-140 (HESA 90-02) was unveiled in December 2002. Three days before the ceremony, a Ukraine-built Aeromist Kharkov An-140-100 had crashed on approach near Isfahan, Iran. All 44 people on board – mainly Ukrainian and Russian aviation experts – were killed. Pilot error was cited as the reason for the accident.

Tehran-based Safiran Airlines hire-purchased all three manufactured IrAn-140s in 2005, and the registration codes EP-SFD, EP-SFE and EP-SFF were awarded in March of that year. Just five months later, on 12 August 2005, EP-SFD’s right engine failed while landing at Arak airport in Iran, and the aircraft overran the runway, damaging its fuselage. Technical failure in the number-two engine’s fuel control unit was found to have been the cause.

The remaining aircraft, EP-SFE and EP-SFF, remained in service with Safiran until December 2005, when they were sold back to HESA.

It became clear during the 10 months in which Safiran operated the IrAn-140 that the aircraft’s Klimov TV3-117VMA-SBM1 engines were not suited to Iranian meteorological conditions. But Iran Air Tours remained a potential buyer, and three more aircraft were still in production.

In 2008, the Iranian police force was awarded a budget of $50 million to renew its aircraft fleet, and as part of this renewal two IrAn-140s (former EP-SFE and EP-SFF) were ordered. The aircraft were delivered during an official ceremony at Shahin-Shahr on 8 October 2008. The serial numbers 2201 and 2202, along with Iranian police markings, were painted on the fuselage. Police pilots and technicians were quickly trained, and both IrAn-140s were stationed at Mehrabad International airport.

Disaster struck again on 15 February 2009, when the fourth manufactured IrAn-140 crashed on final approach at Shahin-Shahr airport, killing all five on board. The aircraft was on a training flight as part of Iran Air Tours’ type-transition pilot training programme, following its order for 10 IrAn-140s.

In 2010, licence production of four more airframes was completed after a three-year delay. But with no potential buyers lined up, HESA and DIO decided to establish their own regional airline to operate the aircraft domestically.

The airline’s first flight, from Isfahan to Tehran, took place on 19 January 2011. The carrier was registered as HESA Airlines and was later renamed Sepahan Airlines.

All six aircraft were quickly registered under the airline’s air operator’s certificate (AOC), and Isfahan International airport was selected as the carrier’s hub. By May 2011, IrAn-140s were being operated by Sepahan on five main routes: Isfahan-Tehran; Tehran-Tabas; Isfahan-Kish; Kish-Bandar; Abbas-Kish; and Isfahan-Tabas.

Due to the weak performance of the aircraft’s engines, Sepahan’s IrAn-140s were restricted to carrying a maximum of 37 passengers. Antonov had been offered the Pratt & Whitney Canada PW127A engine as a replacement for the TV3-117VMA-SBM1s, but sanctions meant that HESA/IAMI could not implement the engine change.

By October 2011, Sepahan had introduced eight more routes to new destinations, including Kerman, Qeshm, Yazd, Bushehr, Asalouyeh and Orumiyeh, and its weekly number of flights had reached 14.

But US political pressure on Ukraine led Antonov to stop supplying spare parts for the IrAn-140, resulting in the grounding of half of Sepahan’s fleet. The airline’s weekly flights had dropped to just four by February 2012. Also, in July 2012 several of Sepahan’s IrAn-140 co-pilots resigned due to salary issues and the lack of flights.

The aircraft’s number-two engine flamed out on take-off from Tehran Mehrabad International airport, and the pilot requested emergency landing clearance. But the flight crew realised this was not going to be possible, and as the aircraft was on the verge of stalling they decided to perform an emergency landing on Shishe Mina Boulevard, to the northwest of the airport.

While the aircraft was descending and turning to the north, its right wing struck a water tank on top of a building. Control was lost and the aircraft collided with the wall of the Iranian Turbine Engine Organisation, where IrAn-140 engines were being assembled. Ten passengers managed to escape from the wreckage, but the remaining occupants were killed when it exploded.

After the accident, the Iranian Civil Aviation Organisation banned all flight operations of the IrAn-140 until investigation teams from HESA and Antonov could determine the cause of the crash.

However, all five of Sepahan’s remaining IrAn-140s had already been grounded due to a lack of spare parts. Two other airframes which had been completed in 2013 are not considered airworthy for the same reason.