ANALYSIS: How will Boeing fill a 757-sized hole?

That is the question Boeing has been asking internally and among a group of some 30 customers for about three years.

The answer is likely to become Boeing's next major product launch and potentially most technologically ambitious project since unveiling the composite, more-electric aircraft that became the 787 in 2003.

Another decade could pass before such an aircraft – defined within Boeing as the "middle of the market" (or MOM) concept – enters service. But a group of customers have "coalesced" on a set of broad performance requirements for the new aircraft.

"What we've heard back from the customers pretty consistently is, yeah, there's certainly some interest in an airplane that is slightly larger and can fly slightly farther," says John Wojick, senior vice-president of global sales and marketing at Boeing. "But the most important thing they say is, it's really got to have economics like the 737 Max, so single aisle-type economics."

Although the new concept is often called a replacement for the 200-seat, 4,100nm-range 757-200, it is clear that Boeing is looking beyond the 757's size and capability as a starting point for the design. The 757 was designed largely to serve domestic routes in the USA, but has evolved to serve a niche role in long-range, transatlantic service.

Airbus claims a long-range version of the A321neo can replace the 757 on those routes, but Boeing continues to reject the idea that either the 737 Max 9 or A321neo has the capacity to achieve true transatlantic range.

Even if the A321neo can match the 757's range, Boeing vice-president of marketing Randy Tinseth argues that the 757 is still inadequate for the task, citing his annual visit to a conference in Dublin, Ireland, which usually requires a round-trip journey on the long-range single-aisle. 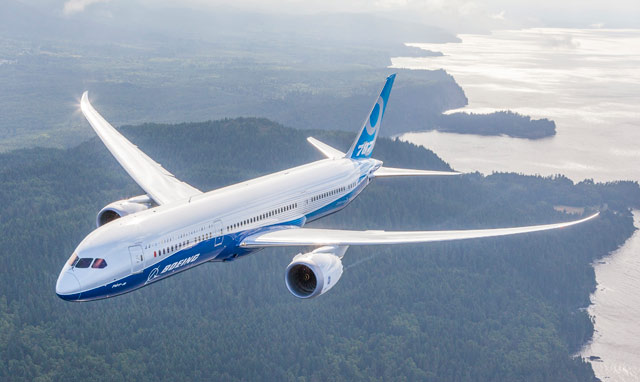 "If you fly from the US, if it's a challenging winter, you arrive about one-and-a-half hours early and on the way home you stop in Nova Scotia," Tinseth says. "So I don't think we should be surprised that they are asking for an airplane with more range."

Among the options Boeing has considered is shortening the smallest version of the 787 or stretching the longest version of the 737 Max. Speaking to investors in May 2014, Boeing chairman and chief executive Jim McNerney appeared to endorse taking that approach, saying the aircraft would be based on the "mature technologies we've got".

"One of the solutions is to just make the 737 Max longer, bigger," Wojick says. "I'm not so sure that that's the one that's going to be best solution in this market space. A 767-type fuselage is another way to go."

A new aircraft designed to fly stage lengths of up to 5,000nm requires a more spacious cabin than available in a narrowbody such as a 757. So the 3.76m (12.3ft) diameter of the 737 Max or even the 3.95m diameter of the Airbus A320neo might not be enough either.

The combination of seat count and range places the aircraft in a category of the market usually reserved for a widebody such as the 767 with its 5.03m fuselage diameter.

But there could also be options in between traditional narrowbody- and widebody-sized fuselage cross-sections. In 1985, for example, Boeing launched development of the 7J7 to replace the 737 Classic family of aircraft, but cancelled the project four years later.

The 7J7 concept, however, featured a 4.17m-diameter fuselage. That was not quite wide enough to seat passengers six-abreast in a twin-aisle format. But it was enough space in a single-aisle layout to allow passengers to pass by the catering cart on the way to the lavatory. It is only 41cm (16in) wider than a 737, but it may offer enough comfort to enable long-range segments with an acceptable level of comfort.

"That's a real challenge for our engineers right now," Wojick says. "How can we deliver single-aisle economics in an airplane maybe with a little more comfort? Because it's going to be flying a little farther than our single-aisle airplanes today, and passengers are demanding a little better if I'm going to be in there for longer."

Setting the dimensions of the fuselage cross-section is only one of Boeing’s many challenges in resolving the MOM concept.

McNerney has repeatedly discussed customer demands for more performance in smaller packages at lower cost, and the MOM concept offers a case in point.

One of Boeing's most influential customers, Air Lease chief executive Steven Udvar-Hazy, has called for the new aircraft to do all the things that Tinseth has described, plus take off and land on a 2,130m (7,000ft) runway at an airport such as New York LaGuardia. Such an aircraft could redefine the concept of long, thin routes for a sub-250-seat-class aircraft, connecting LaGuardia to Tel Aviv or Los Angeles International to Tokyo Narita.

The imperative to maintain 737 Max-like economics with such an aircraft seems daunting. McNerney has already stated a clear preference to avoid "moonshot" technologies for any future aircraft project. Instead, he wants the manufacturer's designers to focus on harvesting investments in already mature technologies.

Boeing's widebody portfolio has several technologies that have not yet drifted into aircraft smaller than a 787. The 737 Max, for example, integrates a fly-by-wire spoiler, but the four-axis, fly-by-wire flight controls developed for the 777 and 787 have not been channelled into a smaller space. The 787's more-electric architecture caused Boeing many headaches as the aircraft was introduced, but the future MOM aircraft could benefit from more than a decade of operational experience with the 787.

The aircraft's structural materials also offer another opportunity for leveraging existing technology gleaned from the 787, and to innovate. The same autoclave-cured carbonfibre material originally developed for the empennage of the 777 was later used to build the entire 787 fuselage and wing. It was reused again on the wing for the 777X, and is now available for the structural materials on the MOM.

Meanwhile, the company is also experimenting with out-of-autoclave composite materials, including a resin-infused composite aft fairing in the 757 ecoDemonstrator. Among transport category types, only the Irkut MC-21 wing and wing-box are known to use resin infusion techniques for load-bearing structures. Boeing has patented an out-of-autoclave technique called compression atmospheric pressure resin infusion (CAPRI), but it is not known to have been applied on a certificated aircraft.

It often takes decades for new structural materials to be used in primary, load-bearing structures. Autoclave-cured composites first entered service on Boeing aircraft with the non-load-bearing ailerons and doors of the 767, then migrated to primary structures on the 777. A similar growth path could be available for resin-infused composites, which could dramatically reduce production costs and complexity. 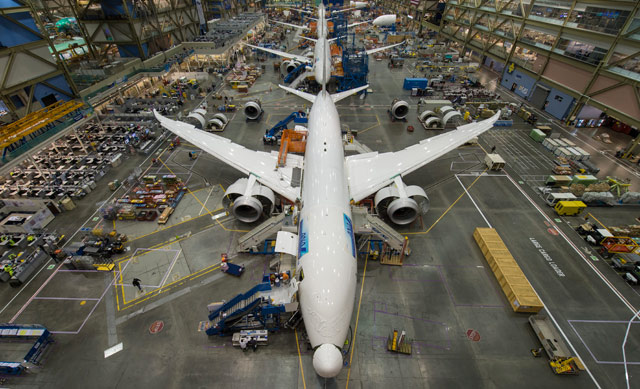 "As new material systems come on board, we’ll do what we've always done. The empennage of the 777 is made out of the same composite material the 787 is made out of. We started small and grew it in time and in scale," says Scott Fancher, general manager of airplane development.

Fancher generally resists requests to clarify the line that separates a smart innovation for a new product and the kind of expensive "moonshot" idea that McNerney deplores. But the overall concept seems rather simple.

Selecting an engine for such an aircraft raises other problems. The 757 is powered by engines in a class between 36,000lb (160kN)-thrust to more than 43,000lb-thrust. By contrast, the highest thrust setting for the two most modern narrowbody engines in development today – CFM International's Leap and Pratt & Whitney's PW1000G – is 35,000lb-thrust. The lowest thrust setting for the two available widebody engines – the General Electric GEnx and Rolls-Royce's Trent 1000 – is 64,000lb-thrust. So all three engine companies would be tasked with developing a major new derivative or a new centreline engine to power a future MOM aircraft.

For P&W, the challenge is not only about summoning the resources required to design, test and certificate another new commercial aircraft engine. The thrust class needed for Boeing's new project also falls on a possible inflection point for the interior architecture of the fan-drive gear system.

The reduction gear in the PW1000G slows the rotation of the inlet fan in relation to the low-pressure turbine at a ratio of 3:1, allowing each module to rotate at optimum speed. As the fan blades turn slower, their length can be increased without causing the tips to rotate faster than the speed of sound. That allows P&W to raise the bypass ratio to 12:1 in the PW1000G, or more than twice the bypass ratio of the International Aero Engines V2500.

But the PW1000G reduction gear uses an arrangement of a sun gear surrounded by five captive star gears, with each star gear encased by a ring gear that drives the fan. As the thrust class of the engine increases with potentially even higher bypass and overall pressure ratios, P&W may have to replace the five star gears with planetary gears.

"If you want to change the bypass ratio and go with a larger bypass ratio but a higher overall pressure ratio, then you're going to have to start looking at changes to gear ratio," says Graham Webb, chief engineer for P&W's commercial engines. "I think it's about 3.5:1, 3.4:1; you've got this inflection point where you've got to go from star to planetary."

P&W has accumulated more than 15,000h and 30,000 cycles of testing on the star gear arrangement, but the company is also very familiar with planetary gear systems. Pratt & Whitney Canada installs planetary gears in every PT6A turboprop engine, for example.

"There are some technologies we'd like to go and work out, such as oil transfer bearings," Webb says. "It's basically minor evolutionary adaptations of the existing systems."

For Boeing, another decision looms on where to build a new aircraft. The manufacturing home of the 757 is in Renton, Washington, but the site appears fully occupied with three assembly lines for the 737 well into the future. Boeing's widebody manufacturing home in Everett in Washington also appears fully occupied, as new facilities are being built to accommodate growing 787 production rates and the addition of the composite wing for the 777X. The only site with extra room is in North Charleston, South Carolina, where Boeing currently assembles only the 787. But Boeing has other options as well. In a March interview, Udvar-Hazy cited Utah, Kentucky, North Carolina and Alabama as states eager to offer attractive deals to a manufacturer such as Boeing, but he acknowledges the decision could create friction with unions.

"That's another issue they've got to deal with – the human side of it," Udvar-Hazy says.

Boeing delivered 1,049 757s and 249 767-200/200ER aircraft while each was in production. Neither aircraft family offered the performance characteristics that Boeing is considering for the MOM concept. It is all-new territory in an industry with few untapped markets remaining.

"That's a white space. So we're going into a white space," Tinseth says. "The challenge for my team is to figure out with their customers how big that market is.