.In its shake-up of the regulations governing unmanned air vehicle operations in Europe, EASA has proposed that training and licensing of pilots be incorporated into its future rule making.

A new risk-proportionate set of regulations that the authority is pushing through would guide the transformation of optional national-level qualifications into mandated, European-recognised UAV operator training – as is the case with manned aviation.

“The UK CAA [Civil Aviation Authority] oversees the licence to operate in that [manned] environment, so you are a registered, approved CAA training school,” Neil Williams, operations and training manager at Resource Group, a company that offers UAV training in the UK, says.

A number of incidents over the past year that have involved UAVs being operated too close to manned aircraft, infrastructure and crowds of people, have led for calls for more control over the use of UAVs.

There are offensive technologies being developed to stop UAVs getting too close to where they should not be - such as geo-fencing and surveillance systems that can jam a UAV’s control link. But however effective, these are crude filters, so clarification of the level of pilot qualification required to operate where the UAV poses a risk would be helpful.

One company offering UAV pilot training is Resource Group which focuses particularly on those who want to make a living out of flying. Courses include theoretical work done online and two days of live training, followed by a formal assessment. The company also helps pilots develop an operations manual for the tasks that they wish to carry out with the aircraft.

In the UK, permission can be granted by the CAA to carry out commercial aerial work using UAVs, and while training for this is not a legal requirement, qualifications such as those offered by Resource Group make permissions easier to come by.

The UK’s Air Navigation Order, or CAP 393, dictates rules for any user of small UAVs of less than 20kg (44lb). The aircraft must, for example, remain within the operator’s line of sight and must not endanger the public: “The person in charge of a small unmanned aircraft must maintain direct, unaided visual contact with the aircraft sufficient to monitor its flight path in relation to other aircraft, persons, vehicles, vessels and structures for the purpose of avoiding collisions,” the regulation says.

Cap 722, meanwhile, is a guidance document for UAV operations. It does not specify formal flying qualifications for operators:

“The requirements for the licensing and training of United Kingdom civil remote pilots have not yet been fully developed. It is expected that United Kingdom requirements will ultimately be determined by ICAO Standards and Recommended Practices and EASA regulations.”

Cap 722 adds that until these regulations are formalised, the UK will determine the requirements for flight on a case-by-case basis. Special allowance is also required for commercial work. 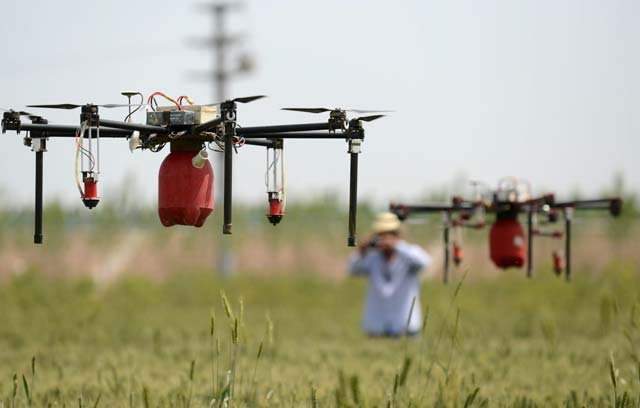 UAVs are proving valuable for tasks such as precision crop spraying

“The UK schools at the moment are not allowed to offer permissions above 20kg,” Williams explains. “The above-20kg category in the UK right now is governed by the same rules as manned aviation. That is one of the points of discussion going forward – where do the larger platforms sit and who is going to legislate them in the future?

“The fundamental difference between the smaller and larger platforms is that when you go above – in the UK at the moment – 20kg, you are talking about having continuing airworthiness issues to address, maintenance programmes, qualified engineers to look after the platform. At the moment, under 20kg you do not need any maintenance programme or certificates, or an airworthiness certificate.”

He says Resource Group could “absolutely” ramp up the training it provides to offer it to operators of larger UAVs, and could utilise the expertise it has in training manned aircraft engineers, specifically airliners.

“Resource Group already has existing skill bases, and could extend from small, hobbyist drones into what is more recognisable as a ‘proper aeroplane’.”

But Williams sees a clear skills gap among would-be UAV operators. Currently, he says, less than 5% of those wishing to use them commercially have aviation backgrounds, and 95% of those that Resource Group sees have no aviation experience.

Williams reckons most people are capable of passing the examination, but some do not have the flying skills and therefore fail the formal assessment. In these cases, Resource Group will not allow their paperwork to be presented to the CAA.

“We advocate it [the training] and if you want a permission for aerial work from the CAA, which is your ticket to present to a customer to say ‘I am approved by the CAA’, then having the training is important,” Williams adds.

“The global market is inconsistent… but nobody has just ignored it, and there are very few places where you can fly with impunity and you don’t need any sort of training or qualifications whatsoever.”

In the USA, training is not mandated by the Federal Aviation Administration, but is becoming more popular as commercial operations of unmanned systems proliferate. One company offering courses is Unmanned Vehicle University in Arizona, which started schooling UAV pilots in 2012.

University staff have aeronautical experience ranging from manned platforms such as the Lockheed Martin F-16 to unmanned aircraft such as the General Atomics Aeronautical Systems MQ-9 Reaper and Northrop Grumman RQ-4 Global Hawk. Says provost John Minor: “We believe that we’re doing everything the FAA has said that it will probably want in the future based upon… the proposed rules for the operations of small UAS.”

The course is split into three parts, starting with 16-18h home-based online classroom training, followed by about 10h of simulator work, again at home and on a system provided by the university, which simulates many different unmanned and manned aircraft types, both fixed and rotary wing.

Finally, students spend two days with flight instructors, at any of a number of locations around the USA.

“It is recognised by some employers that a student has gone to this level, but the FAA doesn’t have any published certification, rules or standards for it, and you can’t get an FAA certificate like you can a pilot’s licence today,” Minor adds.

Says Minor: “The FAA is granting 333 exemptions that allow people to fly these drones commercially in order to be able to do this, but they have to go through that 333 exemption process.

“Under the 333 exemption, they require the pilots to have a sports pilot’s licence, the lowest level of private licence that you can get, but whether or not they are going to continue that in the future remains to be seen.”

A specific operator’s licence could be an option in the future instead of a pilot’s licence, but for now the 333 exemption is the ruling on UAV operations and qualifications.

Minor adds that the pass/failure rate is very high: “It is seldom that somebody cannot master the skills to pass,” he says.

One customer is Rob Hannaford, who after training returned home to South Africa to set up a company called UAV and Drone Solutions – using UAVs installed with infrared cameras in a bid to thwart elephant and rhino poachers.

Minor says he is in discussions that could see the university expand further with international clients, probably in Europe and South Africa: “I would say some time in 2016 we will be tapping into that market.”

He adds: “In addition to the traditional unmanned systems engineering courses that we’re teaching, we’re going to start adding more speciality courses, including on the academic side and the flying side.

“At the moment the training we’re doing is just small UAS pilot training, but in the future we’d probably expand to some larger aircraft and into specific missions, like teaching people how to carry out precision agriculture, or the very specifics or how to do search and rescue or inspect power lines.”

This will involve employing mission-specific experts to carry out the training, he says.

One example of mission-specific training that the university already does is with the military, including with the US Navy Seals, although Minor could not provide any more detail.

However, the university envisages the real growth area to be on the commercial side: “I really see the commercial side taking over more – the professional videographers and the people carrying out services with UAVs that are cheaper than with manned aircraft.

“That’s really where the explosion is going to be. The military is not going to give up on UAVs for a while; they’re always going to be around so there will be opportunities, but we really want to service and focus on the growth of the commercial industry.”

Minor’s optimism about the growth potential of civil-focused UAV flight training stems from a realisation in the industry and among regulators that unmanned system operators have as much need to be formally qualified as do pilots of traditional, manned aircraft.

As for fears about the proliferation of “drone” technology, he adds that while there are people that will use a growing technology such as this maliciously, there are far more that want to use it for commercial reasons – just as they do with manned aircraft.

“There’s a lot of fear out there with the public and the unknown, and fear that it is going to be used for bad purposes,” Minor explains. “Criminals of course are going to get hold of it and use it for their purposes.