ANALYSIS: Japan's F-3 fighter pursuit is worth the wait

In early January, Japanese defence ministry officials confirmed that their next-generation fighter technology test programme had fallen behind schedule. The advanced technology demonstrator-experimental (ATD-X) is a prototype designed to test the stealth, flight control and propulsion technologies necessary for the nation to create its fifth- and eventually sixth-generation air-superiority fighters.

ATD-X had been scheduled for its first test flight in 2014, but problems with developing the experimental engine control unit has pushed this back until late this year at the earliest. However, this delay will not affect the overall development timeline of the ministry's two fighter research projects, officials say.

The prototype has picked up the unofficial nickname "Shinshin". This is typically translated as "spirit of the heart", but might be better understood to mean "soundness of mind". ATD-X is a means of developing, honing and maintaining the cutting edge skills and technology to produce a competitive fighter capability to replace the Japan Air Self-Defence Force’s Mitsubishi F-2 and F-15J fleets in the 2030s. That will be no mean feat for a national industry whose last domestic-built fighter production line closed in 2011, when the service received its final F-2.

Fears of abandonment by the USA drive significant elements of Japanese defence policy, including procurement. In the 1990s, Tokyo grew increasingly concerned that Washington would not share its sensitive stealth technology – and it had reason to be worried. During negotiations for both the F-15J and F-2, Japan faced congressional reticence against transfers of the USA’s most-prized fighter technology.

Sure enough, in 1998 Congress prohibited the sale and licensing of the Lockheed Martin F-22, locking down American fifth-generation fighter superiority. Japan's air force had been set on securing the Raptor to replace its McDonnell Douglas F-4EJ Phantom fleet, so the government lobbied hard to overturn the export ban.A downgraded F-22 export variant seemed possible in 2006, but confidence in Tokyo’s ability to keep shared technology secret was still badly damaged following a 2002 leak of data concerning the Aegis combat system. Congress reaffirmed the ban on foreign sales of the F-22, and while lobbying efforts did not stop, Japan was already working on its hedge against further abandonment.

In fiscal year 2000, Laboratory Three at the defence ministry’s Technical Research and Development Institute (TRDI) began an eight-year research programme into manoeuvrability focused on 3D thrust-vectoring of an experimental engine, stealthiness against radar and infrared sensors, plus self-repairing flight control technologies that could allow an aircraft to continue flying despite battle damage. The programme included radar cross-section testing in France in 2005 andmanoeuvrabilitytesting of a remote-controlled scale model two years later.

In FY2006, the TRDI kicked off a five-year "smart skin" sensor research programme, embedding the skin of a fighter with a honeycomb structure of radar-capable phased-array antennae.Then, after the US export ban became concrete, in FY2008 it launched a three-year systems integration programme to combine the various technologies it had so far researched. This resulted in the ATD-X effort being born in FY2009. 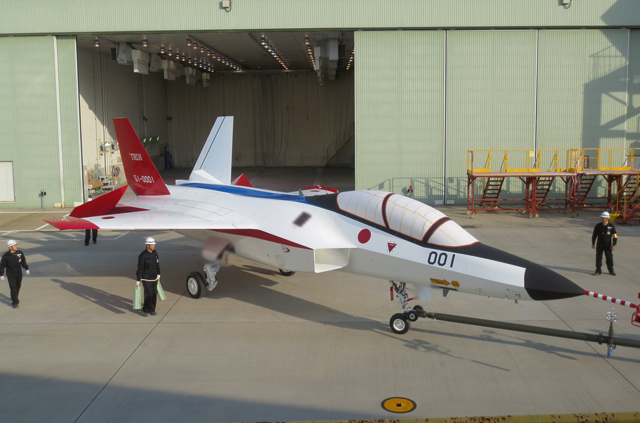 ATD-X prime contractor Mitsubishi Heavy Industries (MHI) has already assembled the prototype at its Komaki Minami plant near Nagoya. At 14.2m (46.5ft) long and with a wingspan of 9.1m, the aircraft is much smaller than its foreign fifth-generation counterparts. This is because it is unarmed, and does not need extra space for internal weapons bays.

Two IHI-made XF5-1 low-bypass turbofan engines power the ATD-X, each providing a maximum of 5t (11,000lb) of thrust. The powerplant was in development at TRDI for 13 years from 1995. At the exhaust, three paddles operated by the integrated flight propulsion control computer provide Japan with its first 3D thrust-vectoring system. But despite all the parts being in place, automatic engine restart issues currently dog its engine control software, making it unsafe to fly.

The Y39.2 billion ($330 million) project has become a matter of pride for Japanese nationalists. It is not uncommon to hear ATD-X called the "Heisei-era Zero", in reference to the revered World War II-era domestic fighter. But the truth is that ATD-X will never enter production.The project will wrap up by April 2017, ahead of a government decision on whether to seek a domestic fighter production programme to replace the F-2, or pursue an international development project instead.

The technologies developed in ATD-X will be implemented in whatever platform is chosen for the F-3 – the assumed designation of the aircraft expected to enter service in the 2030s.

Flight test results from ATD-X will be a significant factor in the government’s 2018 F-3 decision, but other issues will drive the debate. Japan may have developed the technologies required for a fifth-generation fighter, but can it develop the skills and know-how to finalise a deployable sixth-generation platform? Not only that, can the Japanese aerospace industry build a jet on its own and still be cost-effective?

Of all Japan’s major defence manufacturers, only MHI has the experience and capability to produce a jet fighter. It has cut its teeth on all of Japan’s post-war fighter platforms – all licensed from or jointly-developed with the USA.

Japan has shown consistent concern with maintaining MHI’s skills. Domestic aircraft production is far from cheap and Japan pays significant premiums for the ability to license and locally manufacture existing platforms from US manufacturers.

This factor has shaped Japanese defence procurement significantly over the nation's post-war history. The F-15J was mostly made in Japan under license, and the procurement of the Lockheed F-35 will follow the same path. But licensed aircraft frequently come with black-box systems designed to prevent the transfer of sensitive technology, locking Japan out of the know-how necessary to advance to the next generation of fighter production.

Japanese industry also expects government subsidies for maintaining its skills. Last year, MHI had a public spat with the defence ministry when it failed to contribute parts to the Lockheed-led F-35 production programme. The government hopes participation will reduce Tokyo’s eventual procurement cost, but MHI reportedly asked for Y10 billion to cover the cost of readying its plant and equipment. There is a fundamental gap between the government-led push to promote collaboration in international defence projects and the willingness of industry to bear the cost burden.

The F-2 offers a cautionary tale for future domestic-built fighters. The TRDI and MHI worked with Lockheed to create a new aircraft based on the F-16. The result was an aircraft so exceptionally expensive that the Japanese government could only afford to buy 94 of the 144 aircraft it planned. ATD-X’s domestic roots will avoid the possibility of Japan’s ally holding back on key technologies, but at significant development cost.

Given Japan’s recent moves into the international defence market, with submarine deals under way with Australia and joint missile development with the UK for the F-35, this cost-efficiency problem has become less acute. An internationally-developed platform also seems more likely. If Japan is able to manufacture an exportable fighter, MHI could better cover its costs. However, the shared costs of a bilateral partnership or consortium offers greater financial rewards than were ever possible when Japan’s defence market was isolated from international buyers.

The requirements for the F-3 candidate are currently undecided. Tokyo will need a sixth-generation aircraft that can enter service by the mid-2030s. But while the specification is unknown, early work into ATD-X’s successor demonstrates the avenues the defence ministry is considering.

The TRDI is currently working on a concept known as the "i3 Fighter". The three Is of the project are: "informed" – able to tap into mobile networked assets; "intelligent" – leveraging leading robotics skills and superior missile technologies; and "instantaneous" – using fibre-optics to improve reaction times and survivability. It is an explicit attempt to research the essential technologies required for a domestically-manufactured sixth-generation stealth fighter.

Recognising that Japan cannot match its neighbours in numerical strength, Tokyo is instead hoping to create a world-leading qualitative advantage. The nation could also use these technologies as a bargaining chip towards more favourable terms in an international fighter development project.

Since the i3 Fighter concept was announced in 2010, the TRDI has created 3D digital mock-ups of increasingly low-observable airframes. These are tested in air-to-air and air-defence simulations, the results of which feed back into better designs.

The TRDI expects the various research projects making up the i3 Fighter to wrap up between 2018 and 2020. Research into unmanned sensor assets and energy weapons will continue onwards, with current projections reaching out another 15 years.

Japan's concept is ambitious, particularly for a nation without a complete current-generation fighter production line. Directed energy weapons in particular could prove to be a black hole for funding; a lesson that the USA has already learned the hard way. But the technologies created by Laboratory Three will give Japan an international competitive edge, and allow it to benefit from greater technology transfer opportunities in the future.

No-one knows what the F-3 will look like yet, but while ministry officials are concerned whether Japan has the industrial capacity to make a true "Heisei-era Zero", they are unwilling to let the world pass them by any longer.