Two companies will be chosen on 1 August to build separate demonstrators under the US Army-led Future Vertical Life initiative.

Describing exactly what that means, however, comes thick with technological, industrial and programmatic caveats.

First, FVL is not a funded acquisition programme, which leaves the future beyond the five-year demonstration of two high-speed rotorcraft open to doubt. It could become the heart of the US military rotorcraft fleet after 2030, or it could become another chapter in the long history of failed attempts to combine the speed and range of a fixed-wing aircraft with the vertical lift and hover capabilities of a helicopter.

Second, the consequences of winning or losing the two demonstration contracts are not clear. US defence officials emphasise any future competition for an FVL contract will be open, no matter which teams are selected to build and fly the two demonstrators in fiscal year 2017. That policy keeps the door open to the losing bidders of 1 August decision, as well as companies that either abstained from this round, such as Airbus Helicopters, or were not among the four selected to bid, such as Piasecki Aircraft.

Third, the army and industry appear to be hedging their bets. While FVL proposes switching to all-new platforms, the enabling technologies – engines, transmission and mission software – are each designed – just in case – to flow back as upgrades to the existing fleet of Boeing AH-64 Apaches, Sikorsky UH-60 Black Hawks and Boeing CH-47 Chinooks.

So far, FVL’s main accomplishment has been to reinvigorate the clean-sheet design skills of a rotorcraft industrial base that has been slow to innovate, compared with fixed-wing aircraft peers. To date, the programme’s funding and promise has prompted key players in the industry to establish a modern digital design database, allowing Pentagon officials to experiment with different configurations much more rapidly than before.

“We can go to the industry today and say we want to alter a particular aspect of your solution and they can give us solution feedback fairly quickly,” says Dan Bailey, the army’s programme director for FVL. “What we’ve done to date is already leaps ahead of where we were five years ago.”

Despite the many uncertainties, rotorcraft makers have fully committed to FVL as the first initiative that seeks as a long-term goal to design a clean-sheen, vertical-lift aircraft for the US military since the cancellation of the Sikorsky/Boeing RAH-66 Comanche in 2004 and the fielding of the Bell Boeing V-22 Osprey two years later. 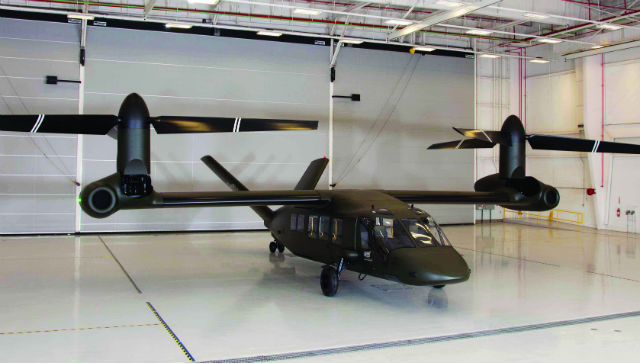 The two winning teams will match the army’s investment in the demonstration, which is budgeted for about $240 million. For that sum, the two teams design and build a full-scale, flying demonstrator, with first flight scheduled in the fourth quarter of FY2017. The army plans to retire both demonstrators after the JMR-TD programme ends in FY2019, and each aircraft will be designed to accumulate less than 200h of flight time.

The flight demonstration will be followed by a second phase focused on developing mission systems software, a frequent cause of cost overruns, delays and operational constraints in military aircraft acquisition. It follows an ongoing effort by the US Navy called the future airborne capability environment, which seeks to create a definitive standard for military aircraft. New applications could be rolled out in the same way that Apple provides for the iPhone, replacing the current version with bespoke software systems with each platform that can only be accessed by the original manufacturer.

To save costs, Phase 2 of the JMR-TD does not include integrating the new software architecture in either of the demonstrator aircraft, so it will be limited to ground tests.

The goals of the flying demonstration and the software phase are two-fold: to inform the army as it decides how to replace the UH-60 fleet in the mid-2020s and to reduce the risk of several new technologies before entering a full-scale development.

Which course the army proposes – a clean-sheet FVL or upgrading the UH-60s with bigger engines – is still open to debate.

Army officials insist on one hand that the inventory of platforms today is not sufficient to meet the needs of the future. A capability-based analysis completed by the army in 2009 looked at future vertical lift missions and found 35 shortfalls with existing platforms, although the details are classified.

“You’re not going to be able to do what the army wants in the future without a significant step change,” says Robert Hastings, Bell vice-president of communications and chief of staff. “Or they’ll be trying to do very different missions in the future with aircraft that were designed long ago.”

The army has outlined four classes of FVL aircraft to address those capability gaps, ranging from an armed scout known as the FVL-Light to a UH-60 and AH-64 replacement called the FVL-Medium in the short term. In several decades, the Army would replace the CH-47 with the FVL-Heavy. A more ambitious project seeks to define an aircraft larger than a C-130, but with vertical take-off and landing capability.

The challenge for the bidders in the ongoing JMR-TD competition is to design an aircraft for the FVL-Medium requirement that can be scaled up or down. The FVL-Medium must be sized to carry 14 troops, accelerate to 230kt (425km/h) and fly at least 2,100nm (3,890km) without refuelling.

Of the latter, Sikorsky and Boeing have teamed up to offer the SB-1 Defiant, a follow-on to Sikorsky’s self-funded X-2 high-speed demonstrator and the ongoing S-97 Raider development project. The SB-1 would feature the same coaxial and rigid rotor system to provide vertical lift and a pusher propeller to provide thrust. Boeing would integrate the Honeywell T55 engine that now powers the CH-47.

Gaffey is also proposing to use an innovative business model by teaming with a group of 15 or 16 small companies scattered across the USA to produce the aircraft. “We are trying to become a virtual aircraft OEM,” says Gaffey. “It could very well bring a different level of competitiveness going forward.”

“One thing we learned about composites is if you mechanically fasten them the way aluminium is built, you end up with a very expensive carbonfibre structure,” he says.

In some ways, Bell Helicopter has already fielded an aircraft in the FVL-Medium class with the V-22 Osprey. However, it represents an older generation of design skills and technology and the efficiency of its rotor system is constrained by the US Marine Corps’ requirement to operate on amphibious carriers.

So Bell has teamed with Lockheed to develop the V-280 Valor, which it describes as a third-generation tiltrotor, with the experimental XV-15 representing the first generation. The “280” part of its designation represents the aircraft’s potential velocity in knots, slightly higher than the V-22’s listed maximum speed of 272-275kt. The V-280 also uses a simplified rotor system, in which only the rotor blades tilt instead of the entire nacelle.

Finally, Karem Aircraft has proposed an optimum-speed tiltrotor. Founder Abe Karem gained prominence by designing the Amber unmanned air system, which was renamed the Predator after it was acquired by General Atomics Aeronautical Systems in the early 1990s. Karem then moved on to develop optimum-speed rotor technology, which he first applied on the A-160 Hummingbird unmanned helicopter, which set a rotorcraft endurance record by flying nonstop for more than 18h.

For the past decade, Karem has been adapting the geared rotor system for the commercial and military markets, with a 75-seat tiltrotor aircraft called the TR-75 Aerotrain.

Karem adapted the TR-75 into a design called the TR-36 to meet the FVL-Medium requirements. The “36” in the designation refers to the size of the aircraft’s rotor diameter in feet.