Germany's air travel market is being reshaped as Lufthansa restructures its business with the build-up of low-cost unit Eurowings while EasyJet, Ryanair and other budget sector carriers expand their presence in the country.

The inroads being made by low-cost operators in the market are one of the key dynamics. Ryanair has always had a presence in Germany, but has put its foot on the accelerator. The carrier aims to quadruple its market share in the country to 20% over the coming years.

It will open additional bases in Hamburg and Nuremberg for the winter 2016/2017 schedule, and is expanding existing operations in Berlin and Cologne. After opening its Berlin Schonefeld base in 2015, it plans to almost double the local fleet to nine aircraft this winter.

"The new-look Ryanair gives us a stronger offer as Germans seem to embrace classy travel," says the airline's marketing chief Kenny Jacobs, who describes the German market as an anomaly due to its low penetration of budget operators.

EasyJet established its second German base in Hamburg – after Berlin – in 2013 and has since increased its presence in the Hanseatic city. It now serves more than 120 routes from seven German airports, Flightglobal's Innovata schedules show.

In March, Air France-KLM opened in Munich its budget subsidiary Transavia's first base outside France and the Netherlands. It stationed a pair of Boeing 737s in the Bavarian city – with another two scheduled to follow by June – in order to operate 20 routes across Europe and to Morocco.

Low-cost carriers have been encouraged by Air Berlin's continued restructuring. The airline is concentrating on its main hubs in the German capital and Dusseldorf as part of an effort to reduce network complexity and costs. Several new long-haul routes to Cuba and the USA were revealed in 2015 in order to raise revenue in the more lucrative transatlantic segment. But the carrier's overall capacity was down 5% last year on 2014 and more than 8% compared with 2010.

Lufthansa, for its part, is setting up Eurowings as a pan-European short- and long-haul low-cost airline on the basis that price-sensitive leisure traffic is a growth segment in a mature market and that concentration on its traditional network operations alone will not sustain the group.

The crucial difference between Germanwings and Eurowings is in their corporate structure and market orientation. Germanwings' objective was to operate from German airports, and it was closely associated with Lufthansa.

Eurowings, on the other hand, has been set up as an "open platform" with different operating units. Crucially, it is a standalone brand separate from Lufthansa – and its Alpine mainline subsidiaries Austrian Airlines and Swiss – and will serve the group's home region of Austria, Germany and Switzerland – and potentially other nations.

Under the Eurowings brand, different operating units will internally compete for the best cost and growth prospects, and Lufthansa Group executive board member Karl Ulrich Garnadt last month said that Eurowings' planned growth will depend on recruitment of external carriers. "Long-term scale effects you achieve only through size. A crucial point will be other companies joining us."

Lufthansa group chief executive Carsten Spohr in March also revealed that Munich was being evaluated as potential gateway for Eurowings' long- and short-haul flights from 2017 or 2018. The carrier launched intercontinental flights from its Cologne base in October 2015 with Airbus A330s wet-leased from SunExpress. For Spohr, Munich offers opportunities for more leisure-oriented routes that could not be profitably served by Lufthansa.

The proposed Munich move appears to be partly a reaction to Transavia's arrival in that city. Air France-KLM's outgoing chief executive Alexandre de Juniac said in February that Bavaria represented "a premium market" with "strong purchasing power" that has been under-served by low-cost carriers.

But the prospect of Eurowings operating from Munich signifies a more fundamental shift than a mere reaction to another European legacy airline group establishing a low-cost unit in Lufthansa's secondary hub.

Eurowings is considering additional airports for long-haul flights, which can be introduced comparatively flexibly as they are not integrated into complex mainline hub operations with feeder services. For a point-to-point airline, Garnadt notes, long-haul routes need only be commercially viable in their own right.

For the parent group, a move to intercontinental point-to-point services would be an option of catering for Germany's fragmented market structure. Cities such as Berlin, Dusseldorf and Hamburg are vital source markets for Lufthansa.

Offering intercontinental point-to-point services from secondary airports might also be a means of responding to competition from Middle Eastern airlines which fly to Dusseldorf and Hamburg – in addition to Frankfurt and Munich – to attract customers to their hubs.

However, it will remain challenging for Lufthansa to compete with direct flights against Gulf carriers' breadth of destinations from their hubs. What's more, a build-up intercontinental point-to-point routes from secondary airports will potentially reduce Lufthansa's own hub traffic and might thus limit the mainline's ability to support a wide-ranging long-haul network.

In Munich, Lufthansa might need to transfer mainline services to Eurowings for an expansion of the budget unit. The airport operator says that the scope for stationing additional aircraft – "especially in the low-cost segment" – is "extremely limited" as a result of a slot shortage and Transavia's growth.

With that carrier's arrival, the share of low-cost airlines at Munich grew by half to about 6%, the airport operator notes.

Munich registered the highest growth in absolute seat numbers among German airports in April 2016 compared with the same month two years ago, Innovata data shows. In addition to Transavia's launch, EasyJet and Vueling have significantly grown their presence, and Norwegian started operating from the hub during that period, too. But Lufthansa Group carriers, Emirates and other network operators – such as United Airlines – have also all raised capacity, especially through deployment of larger aircraft. 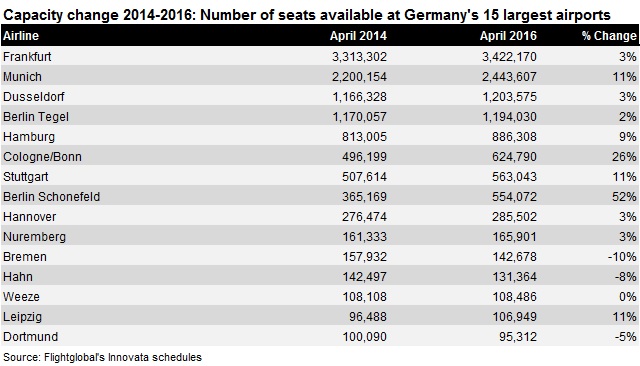 Berlin Schonefeld is the airport growing at the second fastest rate, in absolute terms. That increase is predominantly a result of Ryanair raising its capacity fivefold over the last two years. The airport's largest operator, EasyJet, also increased its capacity around 7%.

In light of the two carriers' expansion, Lufthansa redeployed Germanwings to Schonefeld last year, after the airline group had consolidated all operations in Tegel in 2012 as part of the non-hub route transfer to Germanwings.

But between 2010 and 2014, Schonefeld's seat capacity had declined 3% as Germanwings departed and Ryanair reduced services.

A similar situation exists at Cologne airport: its seat capacity shrunk 14% between 2010 and 2014, largely as a result of Air Berlin and Lufthansa withdrawing services. But over the last two years, airlines have raised the number of seats by more than a quarter. This is primarily a result of Ryanair's expansion and, to a lesser extent, Eurowings' long-haul launch from its Cologne base. But Turkish Airlines and Wizz Air have increased services to the city.

Just a few miles down the river Rhine, at Dusseldorf airport, seat capacity was raised more than 10% during the four years until 2014 as Air Berlin, Lufthansa and Germanwings grew their presence in that city. But over the last two years, growth has slowed to around 3%. Air Berlin and Lufthansa have reduced capacity, while growth was generated by Eurowings and Germanwings.