Statistics don't lie. But their misinterpretation, deliberate or otherwise, can easily create a false impression.

Air transport has frequently been the subject of well-meaning but badly executed statistical analyses intended, for example, to identify the "safest" airline or aircraft type. The perception of the overall safety of air travel also tends to suffer when high-profile incidents and accidents appear to occur in quick succession.

Clustering is a characteristic of randomness. If people in a large group are asked to stand in a random place in an empty hall they will probably spread out and put distance between themselves and others. The resulting distribution, while perceived as random, would actually be considerably structured.

Search far enough along the random digits of pi and seemingly meaningful patterns of numbers eventually turn up, such as a sequence of nine sevens in a row.

Independent air accidents are distributed randomly in time. But while there may be long periods when there are none – which understandably attract little attention – there are also occasions in which multiple events happen over a few days or weeks. 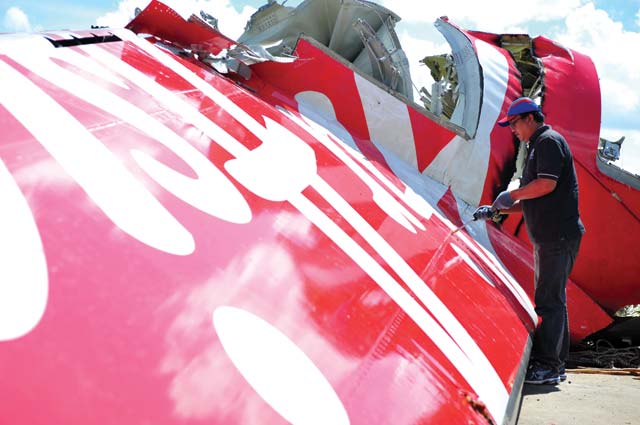 Such clusters tend to create a media frenzy. Air accidents are rare and, as a result, can dominate headlines and lead to considerable questioning of the industry's safety record.

The apparent significance is erroneously interpreted by some media outlets and, in turn, the wider public: several accidents in the last few weeks must surely mean air travel has become unsafe?

Excluding the Germanwings Airbus A320 crash in March, apparently the result of deliberate pilot action, no accidents had occurred in the first two-thirds of this year involving revenue passenger fatalities on Western-built jets.

As of 31 August, the interval since the last such accident had reached 246 days, more than eight months. This span from the Indonesia AirAsia A320 crash in the Java Sea on 28 December 2014 is not a record but, in the last 45 years, there have only been three occasions when the time between two accidents has exceeded this figure. 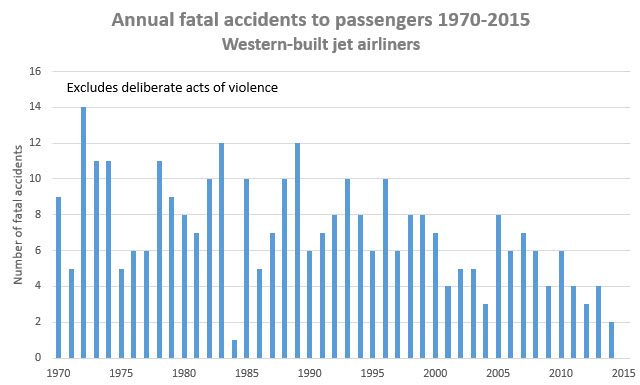 But accidents do not occur at regular intervals and there are times when they bunch together.

Finding significance in particular clusters, to the exclusion of other points of data, gives rise to misinterpretations – the "sniper fallacy", for instance, in which a target is drawn around the tightest group of shots previously fired at a wall to claim evidence of accurate marksmanship.

Placing an artificial time boundary around a localised bunching of accidents is similarly misleading and can have a detrimental effect on the public's perception of airline safety. 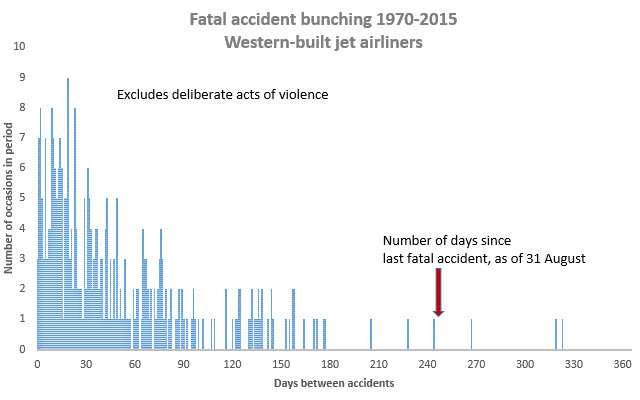 Since 1970, there have been three occasions when two accidents have happened on the same day and 40 occasions when more than one accident has occurred in a seven-day span.

Never have three or more Western-built jet airliners suffered fatal accidents on the same day, although there has been one occasion when three accidents happened in two days.

There have been 53 occasions of three or more accidents in a 30-day period, 10 instances of four or more, and two occasions of five.

These figures illustrate that clustering is not only possible, but typical.

There is a known tendency for people to underestimate the likelihood of such bunching and therefore read significance into statistical clustering where none exists.

Spates of accidents over a relatively short period of time tells nothing, in itself, about the state of airline safety and – contrary to any scaremongering headlines – certainly does not mean that airlines have suddenly become less safe.