Under the deal, Emirates will codeshare on a number of MAB's domestic Malaysia and Asia-Pacific. In turn, MAB will place its code on 38 Emirates services from Dubai to Europe, 38 in the Middle East and Africa, and 15 across the Americas. The Malaysian carrier, which is a member of the Oneworld alliance, says the agreement will be “implemented progressively” over the course of the next year, with sales opening in February.

Analysts Flightglobal spoke to believe that having Emirates as a partner will be a major boost the Malaysian carrier's near term fortunes. Crucially, says some, it shows that the airline has realised that it no longer has a business case to fly long-haul following the after effects of the twin incidents of MH370 and MH17.

“It’s a masterstroke negotiation by Mueller and the first good thing to happen to MAB in a long time. By teaming up with Emirates, they can still have the long-haul link without operating unnecessary aircraft types,” says Maybank Investment Bank analyst Mohshin Aziz.

Shortly after announcing the codeshare deal, the Oneworld carrier confirmed that it will withdraw from its Amsterdam and Paris routes by the end of January, leaving only London as its sole European service.

As a result of those cuts, the airline will have more room to right-size its fleet, and likely allow it to cut back on its long-haul fleet of its six Airbus A380s and eight Boeing 777-200ERs. Recently the carrier raised the ire of lessors as it has moved to cut short leases on a number of 777s.

With the long-haul piece set to be taken care of by Emirates, Aziz says that the Oneworld carrier will be able to focus on consolidating on its network strength in Asia and Australia, whilst still utilising its valuable slots at London Heathrow.

“They are finally behaving like a final-stage airline, which cannot grow much more," says Aziz. "They can only now partner stronger airlines that have strategic links and dominate key grandfather slots.”

Meanwhile, Shukor Yusof, founder of aviation advisory firm Endau Analytics, is more reserved. While he acknowledges that Emirates is the “biggest player in the Gulf” and “the reach that it has is enormous”, he questions if the partnership will sustain the Malaysian carrier in the long-term.

“This could very well play into Emirates' hands, by expanding its footprint and wanting to cover as many cities as possible, driving away the competition in the region,” he adds.

Both analysts, however, agree that the deal puts Malaysian passengers at a disadvantage compared to other non-stop or one-stop options available. Passengers flying on MAB and Emirates’ flights from around Malaysia or Asia to Europe or the Americas would be forced to make transit stops in Kuala Lumpur and Dubai.

“In itself, it is unattractive and not practical," says Shukor. "You are talking about adding at least half a day more to your travelling time, when I can simply fly down to Changi airport in Singapore and take a direct flight.”

But Aziz believes that such a connection may be beneficial for secondary cities in Malaysia that do not have the international links. “It’s a lot easier to get to Europe, but there is a dearth of connectivity to the USA. That said, both types of routes will be very tiring.”

While there appear to be some parallels in the tie-up with the much larger Qantas-Emirates alliance launched in April 2013. Compared to that alliance however, both analysts belive that MAB is in a weaker position, and thus Emirates has more to gain.

“Qantas were not in the same desperate situation as MAB now,” says Shukor. “Both Qantas and Emirates had equal footing and could easily have walked away from the partnership. MAB needs a strong partner more than ever.”

Meanwhile, Aziz adds that “smaller hurdles have to be ironed out”, including setting up of the interchangeability with frequent flyer miles and ground services between both carriers. 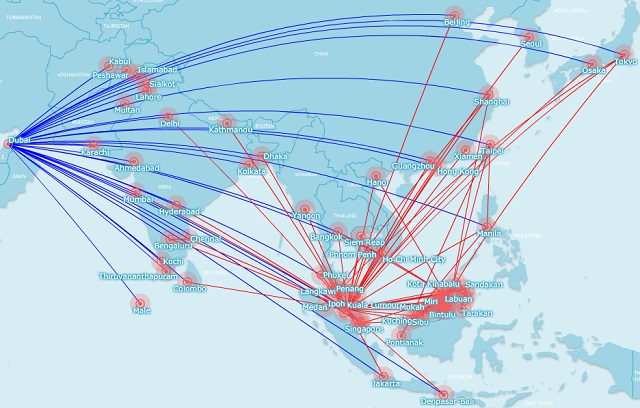 FlightMaps Analytics shows that there are a number of cities served by both carriers in Asia, such as Singapore, Jakarta, Denpasar-Bali, Manila, Shanghai, Guangzhou, Beijing, Tokyo and Osaka.

The tie-up is set to give Emirates a low-risk solution to expanded its reach through southeast Asia, and up into the southern China. It also appears to complement its existing interline arrangement with Singapore-based Jetstar Asia, which is linked to its alliance with Qantas.

While still suspicious about the benefits of the deal, Shukor says that the latest developments are a “better alternative than not doing anything” for MAB. Nevertheless, he adds that the “best option will be to look at the long-term goal and map out exactly how the partnership will boost its survivability as an ailing carrier.”