Terrorism is not a new threat for Middle Eastern air forces to contend with, but the rapid rise of Islamic State militants in the region has laid unexpected pressure on the nations and their allies, following the troop draw-downs in Iraq and Afghanistan.

The presence of the militants primarily in Iraq and Syria has led to Western participation in air strikes under the USA’s Operation Inherent Resolve, which was closely followed by the involvement of regional air forces, including those of Bahrain, Jordan, Qatar, Saudi Arabia and the United Arab Emirates.

With an ever-growing threat on the doorstep, and some ageing fighter fleets, Middle Eastern air forces have made and continue to make a concerted effort to acquire modern offensive capabilities to counter the militants.

Kuwait currently has a 34-strong fleet of Boeing F/A-18C/Ds, with an average age of some 22 years, according to Flightglobal’s Fleets Analyzer database, and committed to replacing these with Eurofighter Typhoons in a planned deal announced with the Italian government in September. It plans to acquire 28 of the type, in a deal believed to be worth $9 billion, having rejected bids from Boeing with its F/A-18E/F Super Hornet and Dassault with the Rafale.

The Kuwaiti selection came three years after Eurofighter’s previous international sale, and if a production contract is finalised, it will be the third regional success for the European consortium, which has also previously sold the Typhoon to Saudi Arabia and Oman.

“This new international success follows an order from the Sultanate of Oman for 12 aircraft in December 2012 and it is further evidence of growing interest in the Eurofighter Typhoon across the globe, and in the Gulf Region in particular,” Eurofighter said after the Kuwaiti selection was announced. 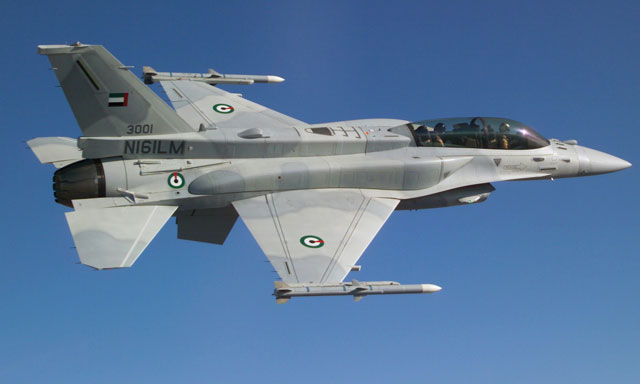 The UAE air force operates 79 block 60 Lockheed Martin F-16s, which are due to be upgraded to a block 61 standard

Muscat’s selection of the Typhoon will see the dozen aircraft added to the Royal Air Force of Oman’s relatively young fleet of 23 Lockheed Martin F-16C/Ds, which range from between one and 10 years in age. Twelve more Typhoons are also on option for the nation, which would put it just behind Kuwait in terms of numbers of the type in the region.

An active electronically-scanned array radar development for the Typhoon, plus the planned integration of additional weapons in the form of MBDA’s Storm Shadow, Brimstone and Meteor missiles – the latter of which is nearing completion, has recently added to the type’s appeal.

However, while the Typhoon had two years ago looked like it was in with a chance of equipping all six Gulf Cooperation Council nations, it has since lost out to others in the region – a development that could be attributable to the price point of the aircraft.

One such example is Qatar, which announced in April 2015 that it had opted to acquire the Rafale.

Qatar, which currently operates 13 Dassault Mirage 2000-5s and six Alpha Jets, elected to acquire 24 Rafales. Its decision closely followed a first export contract from Egypt – for 24 aircraft – and an Indian selection of 36. These successes for Dassault placed it in the export market after years of only managing to secure its domestic customer for the aircraft, and it still has a chance of making sales to Bahrain and the UAE.

Bahrain operates 22 F-16C/Ds and 12 Northrop F-5s, and has touted its plans to upgrade the former for some time now. The F-16 fleet ranges from between 13 and 26 years old, and is becoming increasingly expensive to maintain. As an interim measure, the US government in August authorised a requested $150 million deal to support the fighters, through the provision of new support and communications equipment, as well as ammunition.

“The follow-on support is required to maintain the operational readiness of the Royal Bahrain Air Force’s F-16 fleet,” the US Defense Security Cooperation Agency said, adding that “periodic maintenance is becoming increasingly expensive. The age of the fleet, combined with an increased operational tempo due to recent involvement in Operation Inherent Resolve, has led to increased focus on maintenance and sustainment.”

Bahrain could follow in the footsteps of neighbouring Saudi Arabia in its acquisition, with Riyadh having ordered 72 Typhoons.

Saudi Arabia has the largest fleet of combat aircraft among the GCC partners, also operating the Panavia Tornado and Boeing F-15 Eagle. Riyadh has 81 Tornados in its inventory, and has so far received 51 of its Typhoons. Its air force is also in the process of receiving a new variant of the F-15 – the F-15 “Saudi Advanced” (SA) – from Boeing.

The Royal Saudi Air Force has operated the F-15 for some 34 years, and has a 78-strong fleet of C/Ds and 69 F-15S in service, the latter of which has been in operation since the 1990s. It has 84 F-15SAs on order, with testing of the new variant having begun in 2013. Boeing rolled out the first of the type in April the same year. The F-15SA is touted as having a lower lifecycle cost than previous iterations, plus two additional wing stations for increased payload and a fly-by-wire flight control system.

The UAE, meanwhile, expended a significant effort on comparing the Rafale against the Typhoon for its new strike requirement, but in the end opted for neither, and instead selected to make an attrition buy of upgraded F-16s. It has requested 30 new F-16s to be delivered to a Block 61 standard, although it is not clear if a contract for the aircraft has yet been signed. It currently has a 79-strong fleet of Block 60-standard F-16E/Fs, with Fleets Analyzer showing 77 as being in service.

While the Block 61 acquisition will be completed as a direct commercial sale, instead of using the US government’s Foreign Military Sales route, an FMS deal for associated equipment and training was approved by the DSCA in January 2014, worth an estimated $270 million. Despite being between four and 12 years old, the UAE’s current F-16s are also due to undergo an upgrade that will take them to a similar level to the new Block 61s.

The UAE has previously expressed an interest in Lockheed’s F-35 Joint Strike Fighter, but its lack of availability – it will not be approved for delivery to the Gulf region for some years to come – drove the move towards an interim solution. 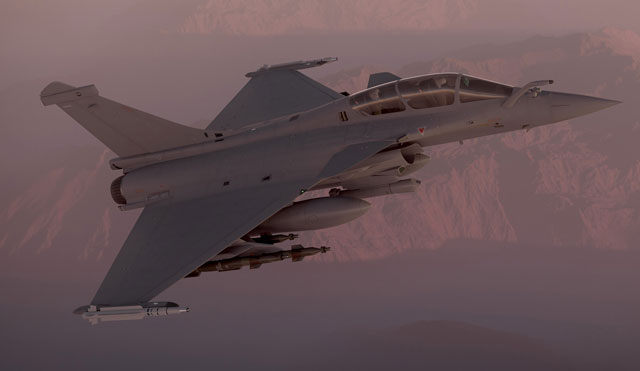 Both the Typhoon and Rafale had been pitched to the UAE, but in December 2013 it was announced that negotiations between the state and Eurofighter had come to an end. This was two years after the potential customer had asked it to submit a bid for the requirement, and only a month after speculation had mounted that a selection could be made at the 2013 Dubai air show.

Considering that no firm contract has seemingly been made for the Block 61 F-16s, the two previously competing types could still be in with a chance in the UAE, and the recent successes for both types – Dassault in Qatar and Eurofighter in Kuwait – within GCC countries could put them back in the view of the outstanding customer.

Outside the GCC, other regional nations that are undergoing transitions in their F-16 fleets include Iraq and Egypt.

Iraq is currently in turmoil as IS militants have seized large swathes of its territory, prompting the government to request aid from western and local allies to help counter their advances. As for its own air force, Baghdad ordered 36 F-16IQs under a $6.5 billion FMS deal with the US government in April 2013, the first four of which were delivered in July.

The Iraqi air force lost one of its F-16s during a night-time training crash in Douglas, Arizona in June, killing its pilot.

Iraq’s first F-16 rolled off the assembly line in Fort Worth, Texas in June 2014, but the support infrastructure that was required at the type’s base in Balad was not ready or secure enough for its planned delivery. The rise of IS also led to the delivery of the first four aircraft being delayed from September 2014 until July 2015. During that time, its early aircraft were diverted to the US Air Force’s international F-16 schoolhouse at Tucson International airport in Arizona, to support pilot training.

Deliveries of Egypt’s Block 52-model F-16Cs were also resumed in July, following the lifting of an embargo that had been imposed as a result of a military coup in the nation in 2013.

Eight of Cairo’s new Block 52 jets have been delivered since then, in addition to eight F-16C/Ds that were delivered before the embargo was enforced. A contract for a combined 20 aircraft had been signed in 2010, with this covering 16 F-16Cs and four D-model trainers. Another four F-16Cs from the order are still to be delivered. Egypt is a seasoned F-16 operator, and has some 200 older examples in its fleet.

Three of Egypt's recently-ordered Rafales have already been delivered to the nation's air force, which also operates earlier Mirage 2000s and Mirage Vs, plus Mikoyan MiG-21s and Chengdu J-7s.