Simulation is an essential tool for improving flight safety through better pilot training, but it could be even more effective, according to some in the industry. Indeed, airlines such as Lufthansa, Cathay Pacific and Cargolux – as well as the US Air Force – have recently decided on simulator motion-system upgrades to enhance their training programmes.

The main limitation of simulator training is the lack of ability to simulate the sustained accelerated flight conditions that the human occupants – the pilot trainees – will recognise and react to as they would in real life. In normal flight manoeuvres this is not critical because accelerations are gentle and brief, but it means that when training pilots to manage flight upsets, the situations from which recovery to safe flight can be practised effectively may be unusual, but not extreme.

Nevertheless, upset prevention and recovery training (UPRT) in simulators can still be highly effective for teaching pilots the priorities for recovery. Pilots need to have a drill that can be coolly followed, because in reality an upset – especially sudden or insidious – can bring confusion, disorientation and high stress. The Air France flight 447 loss of control was a perfect example of what can go wrong: the attitudes and accelerations the pilots were confronted with were far from extreme, but they were unexpected and confusing, and the pilots were unable to recover.

The subject of UPRT for pilots has gone a little quieter in the industry recently, but it is still seen as a necessary weapon against the commercial air transport industry’s biggest killer and destroyer of aeroplanes: loss of control in flight (LOC-I). Other solutions – such as training in a fully aerobatic aircraft – are expensive and take pilots off the duty roster for several days. As a result, the only tool most airlines are prepared to wield against LOC-I – if they do any specific training related to the risk – is a simulator. Indeed, in April this year Canadian simulator manufacturer CAE announced it had received approval from the US Federal Aviation Administration and EASA for a purpose-designed UPRT instructor station.

But there is another problem still endemic in most simulators: “flying” the simulator manually does not feel particularly like flying the aircraft it is supposed to represent, so any manual flight training in simulators does not transfer well to flying the real aircraft with stick and rudder. The way the simulator motion system works as it attempts to imitate reality – and the effect this has on the body’s sensitive balance mechanisms – tends to induce over-controlling by the pilot.

All pilots recognise that “flying” simulators is more difficult than flying the aircraft. Indeed, each recurrent training period partly consists of pilots re-learning how to “fly” the simulator. On return to the line, conversely, they need to re-learn the manual skills on the aeroplane, and they are given rather less practice at this. 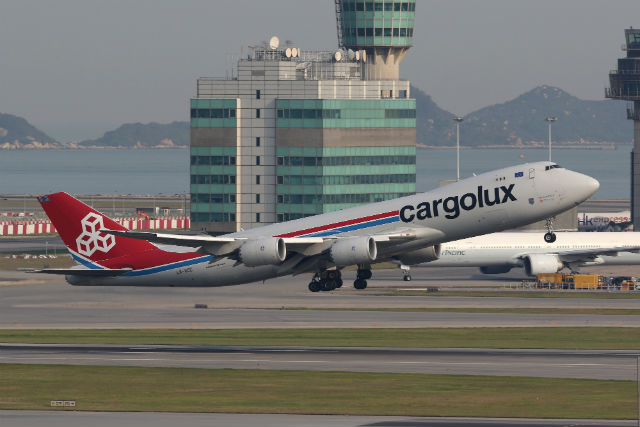 Cargolux has taken to Lm2

Also, instructors know that when pilots, especially those with relatively few flying hours, come to the end of type-rating training on an unfamiliar aircraft – despite the fact that the full flight simulator (FFS) in which they have trained is certified for zero-hours conversion to line flying – they cannot be trusted with landing the real aircraft with passengers on board until they have done some base training (circuits and touch-and-goes) in the real thing.

But a couple of companies, not satisfied with this built-in limitation, have subtly modified the motion control software to produce motion that cleverly avoids confusing the human balance and acceleration-sensing organs in the inner ear.

Belgium-based technology company Acceleration Worx (AWx) provides a bolt-on simulator motion modifier called Lm2 (lateral manoeuvring motion). The secret is a rewritten simulator motion control algorithm. Cargolux Airlines International and Lufthansa Flight Training at Frankfurt am Main are its latest converts, and they have selected Lm2 to improve the effectiveness of the motion systems on their Boeing 747-8 FFSs. After a long trial period with Lm2, both Cargolux and Lufthansa Flight Training decided to upgrade. Cathay Pacific did the same a while ago.

Last year, after extensive testing, the US Air Force decided on an Lm2 upgrade for all 19 of its KC-135 operational flight trainers. CAE USA, prime contractor on the USAF KC-135 Aircrew Training System programme, performed the upgrades.

Flightglobal “flew” a 737 simulator with an Lm2 motion system upgrade some years ago (see below) when it was first being launched by the company, then called Sabena Flight Academy – Development (SFA – D). The performance was impressive (see sidebar).

Another relative newcomer to simulator manufacturing is Lockheed Martin. Since LM acquired Sassenheim, Netherlands-based Sim Industries in 2011, the latter’s integration into the LM brand as Lockheed Martin Commercial Flight Training (LMCFT) has now been completed, and the parent company has begun signalling its product differentiators to make its market presence felt. One particular differentiator is the motion system for the Level D FFS devices: both the hardware and software are new. The motion system drive, manufactured by Moog in the UK, is electro-pneumatic. The engineers explain that subtle manoeuvring motion is mostly provided directly by an electrically driven rack-and-pinion six-axis system, but more emphatic manoeuvres involve a boost from pneumatic pumps backed up by a capacious pneumatic accumulator. Most other manufacturers have moved from using the traditional electro-hydraulic motion systems – now out of favour – to pure electrical drive, so the electro-pneumatic system is unusual.

LMCFT business development and strategy director Neil Tomlin says simulator customers are becoming more demanding: they want a simulator that trains pilots to fly better, not just a sophisticated procedures-and-systems trainer. They are acutely aware of the prevalence of LOC-I as today’s primary cause of fatal accidents. They want simulation fidelity all the way to full stall and to other encounters with the edges of the flight envelope, plus the most effective possible training for upset recovery. LMCFT says it works with every customer to deliver the combination of hardware and software that meets their training priorities, and this seems to be a winner. Despite being a newcomer, LMCFT has sold 10 FFS across a range of aircraft types.

“Flying” a Boeing 737-300 FFS at SFA – D’s base at Brussels Zaventem, I asked for a crosswind and was given 30kt (55km/h) from the right. Conditions were good night visual, I did not use the flight director or autothrottle, and for this first attempt the Lm² motion modifier was not active. I managed the take-off adequately, but on approach I deliberately displaced the aircraft well to the left of the extended centreline for Brussels runway 25L so that recovering against the crosswind by about 1nm (1.85km) on short final would provide plenty of lateral lurches as I lined up the crabbing aircraft for landing. I kicked off drift at about the right time and tried to keep the lurching machine on the runway. It was a seriously inelegant attempt. 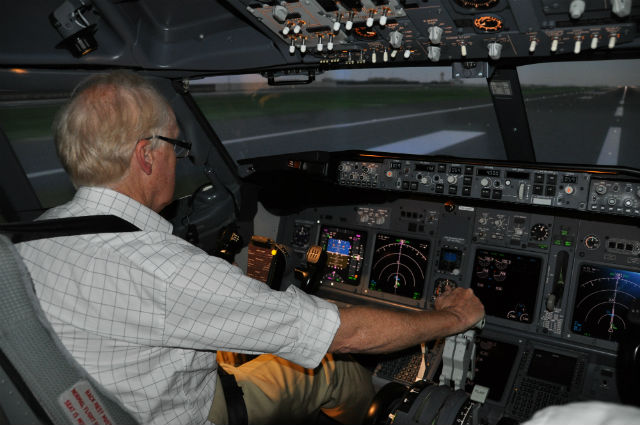 Flightglobal’s David Leamount gets the measure of Lm2

SFA kindly froze the system and put me back on the approach to do the same thing, but this time with the Lm² operating. It was a transformation. The simulator handled like the aircraft would. Its reactions to control inputs were predictable and natural. Just to prove the resulting safe landing was not a fluke, SFA suggested I try starting another approach to 25L and then do a late switch to 25R, but this time with crosswind from the left. It was a delight to do, and the landing was quite good. Leaving the runway entailed a left turn through about 130˚, and the tiller allowed me to keep the nosewheel perfectly on the centreline all the way without any swinging or over-correction.