ANALYSIS: On Asteroid Day, take a minute to look skyward

Anybody inclined to look at deep-space exploration mission proposals and their associated budgets and ask “why?” could do worse than consider the problem of so-called Near Earth Objects (NEOs) – that’s jargon for big chunks of rock that orbit the Sun, until they actually hit us. As long as they are out in space, call them asteroids; once they get so near as to be visible streaks of light in the sky, call them meteors – enjoy the spectacle and, for good measure, take cover.

Meteor strikes big enough to destroy life as we know it or even compromise planetary integrity are not unknown. The dinosaurs are believed to have come to grief in the climate-altering aftermath of an impact powerful enough to create the Gulf of Mexico. One plausible explanation for the origin of the Moon is that it is material flung off a once-bigger Earth by an almighty great collision. But while a large number of people well-studied in the astrophysics of asteroids are reasonably confident that Earth faces no imminent threat from any of the 1km or bigger rocks known to be in our vicinity, we are mostly clueless when it comes to the chances of crossing paths with an asteroid in the tens-of-metres category – big enough to destroy a major city as brutally as would a targeted nuclear strike.

As devastating as it would be, however, a meteor strike is a natural disaster that we actually have, at least in theory, the technical ability to prevent. All we need to do is give ourselves enough time – and to buy ourselves time we need to dramatically ramp-up our search for asteroids. That is the message from a concerned group of scientists who, far from merely bleating into their telescopes, are attempting to launch a space telescope mission – Sentinel – that would not only be the best-optimised piece of hardware ever turned to the asteroid detection challenge, but, if it gets off the ground in 2017-2018 as planned, will probably be the ultimate expression of the power of privately-funded spaceflight.

The concept for the Sentinel infrared asteroid-detection telescope stems from the concerns of people no less serious than former NASA astronauts Ed Lu (two Shuttle missions and an International Space Station stay) and Rusty Schweickart (Apollo 9). More than a decade ago, with planetary scientist Clark Chapman and astrophysicist Piet Hut, they founded the B612 Foundation, dedicated to “planetary defence” in the form of asteroid threat awareness – and action. Aviators will note their borrowing the name from Antoine de Saint-Exupéry, whose Little Prince counts that space rock as his home.

We are not alone

As B612 outlines that threat, in the region of our solar system between the orbits of Venus and Mars, there is Earth – and millions of asteroids, ranging in size from “pebbles to many miles across”. More than a million of those chunks of rock are bigger than 40m (131ft) across, which is the estimated size of the meteor that struck Tunguska, Siberia in 1908. The impact flattened some 2,500km² (965 miles²) of forest – a region the size of the San Francisco Bay area – with an impact some 1,000 times more powerful than the 15 kiloton bomb that destroyed Hiroshima. Fewer than 10,000 of those 40m-plus asteroids have been detected.

Indeed, warnings are not hard to come by. As B612 notes, sensors operated to detect violations of the Nuclear Test Ban Treaty identified 26 explosions of up to 600 kilotons between 2002 and 2013 – all caused by meteor strikes. One of those came in over the Mediterranean Sea, and all were unknown to any existing space- or ground-based observatory.

And, to underscore the fact that we really are flying blind through this swarm of space rocks, a 600 kiloton event took place on 15 February 2013 over Chelyabinsk in Russia, on a day when astronomers were primed to observe the long-anticipated near-pass of another asteroid, 2012DA14. At 30m in diameter, 2012DA14 was about twice the size of the Chelyabinsk meteor, whose airburst damaged buildings and injured more than 1,000 people, mostly from broken glass. 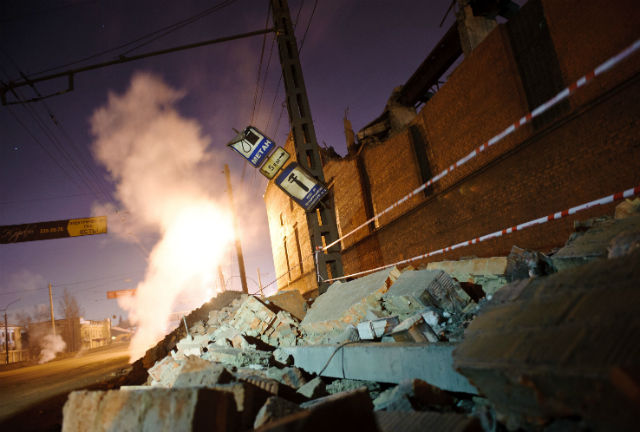 Enter Sentinel, and roll on 30 June 2015 – “Asteroid Day”, to mark the anniversary of the Tunguska event. Speaking at London’s Science Museum during a 3 December Asteroid Day launch event hosted jointly by video-link with the California Academy of Sciences in San Francisco, Dr Brian May – an astrophysicist and adviser to B612, but more widely recognised for having interrupted his studies to join a troupe of musicians known as Queen – summed up the challenge as having “a huge bridge to cross to be aware of what’s coming at us to be able to prepare”. But, he stresses, by being “100 times more vigilant” we “stand a chance of mapping all those million objects over the next 10 years”.

And, says May, while there may be 1 million asteroids out there big enough to destroy a city or worse, the story is actually a “joyful” one – because technology has put us in reach of mastering this threat. Citing the success of the European Space Agency’s comet rendezvous and tracking mission Rosetta, May observes that “it’s a short step to apply a little bit of correction” to the orbit of an object believed to be on an Earth collision course.

Speaking from California, Schweickart outlined a three-spacecraft deflection mission concept that is not new to asteroid protection theorists, but which appears genuinely feasible in light of Rosetta’s success. The theory sees a “tractor” spacecraft flying alongside, using its tiny gravity to tug an asteroid off course, while an “observer” follows to monitor closely the progress. Lastly, an “impactor” strikes from behind or ahead, to slightly speed up or slow down the asteroid.

All of that depends on early warning, which Schweickart defines as 20 years before impact. Since asteroids follow predictable Newtonian orbits, collision candidates can be identified as long as they are observed enough times to measure their paths and speeds.

Eyes on the sky

Rest at least somewhat assured, for much is already being done to catalogue the dangers. NASA’s NEO-search budget was tripled in 2012 to some $20 million, and its ground-based efforts are thought to have identified well over 90% of the biggest threats in the region between Venus and Mars. ESA, meanwhile, has established a NEO-detection programme that aims to have a dedicated and extremely sophisticated telescope scanning the skies from 2016. Meanwhile, ESA’s Gaia star-survey mission has started tracking a billion stars in the Milky Way, and expects to find many other objects – including asteroids in our own solar system.

But finding asteroids has been likened to searching for lumps of coal in a dark room, so it is unlikely that ground-based telescopes can have much success in identifying tens-of-meters-sized threats – such as the Tunguska or Chelyabinsk rocks. Hence the potential value of Sentinel as a space-based infrared survey mission. 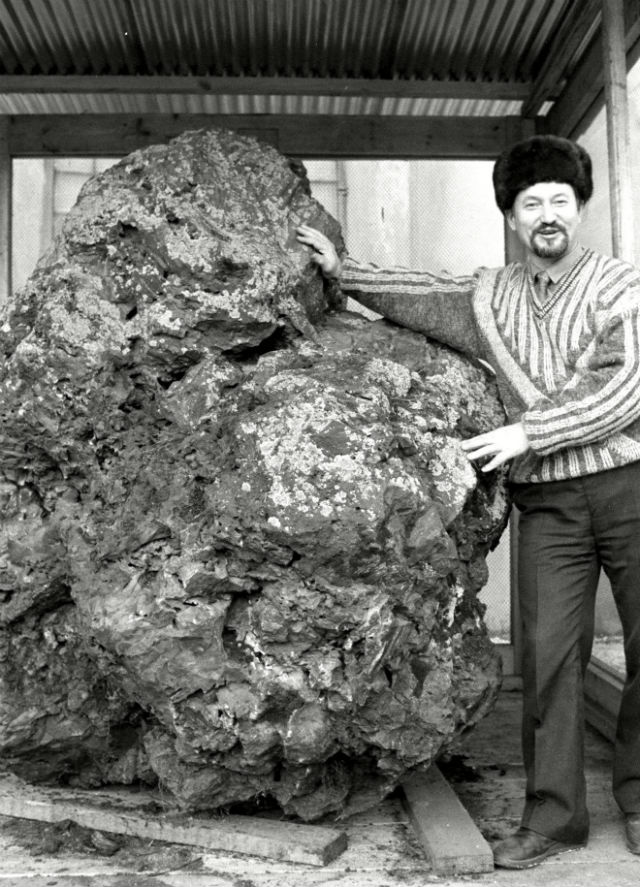 Big rock; possibly a fragment of the Tunguska meteor

Sentinel’s objectives are limited – the group’s claim is that it could “discover and catalogue 90% of the asteroids larger than 140m in Earth’s region of the solar system” while “also [discovering] a significant number of smaller asteroids down to a diameter of 30m”. From an orbit roughly in line with Venus’s and looking “outward” toward the Earth and Mars during a 6.5-year planned service life, following a Falcon 9 launch in 2017 or 2018, the spacecraft “should significantly improve the efficiency of asteroid discovery”.

Money, of course, is an issue – although perhaps it shouldn’t be. The Sentinel team hopes to raise $250 million to build and operate the spacecraft, plus launch costs. Speaking from San Francisco during the Asteroid Day presentation, Ed Lu noted that in total some $40-50 million per year is spent today by NASA, ESA and private institutions to discover maybe 1,000 asteroids, and he declined to speculate on what it would cost to find and track all of the estimated million serious threats.

But, he adds, even with Sentinel in action the amount spent would be “ridiculously small” compared to the cost of grappling with other global problems. Indeed, he and Schweickart noted that it is not unusual for $250 million of public and private money to be spent on refurbishing a museum – and B612's ambitions are truly modest compared to the amounts lavished on, say, new American football stadia.

B612 is not detailing its progress towards raising the cash needed to build and launch, but donors include big names like Adobe, Google and Microsoft.

Asked whether budget struggles on both sides of the Atlantic suggest the asteroid detection effort will have to rely on existing or multipurpose spacecraft if purely private funding isn’t up to the task, May was quick to defend the concept of a dedicated mission. Learning more about asteroids, he stresses, “is good science”.

Lord Martin Rees, the UK’s Astronomer Royal, adds that most asteroids are, of course, already found by telescopes built for other purposes, but while such multipurpose missions may be a way to get a budget, they may not be good enough. Sentinel, he notes, is much better optimised for this purpose.

From San Francisco, Schweickart – no stranger to politics, having served as a science assistant to the governor of California after leaving NASA in the 1970s, and going on to chair the state’s energy board – emphasises Rees’s point, that space-based infrared is probably needed to do an adequate job. And, describing it as unlikely that Congress would pay the bill, Schweickart says that B612/Sentinel has decided to go it alone.

If Sentinel flies, it may well identify a bullet with our name on it. As a private sector project with a truly global remit but no revenue stream (unlike suborbital tourism, for example), it would also reasonably stand as the greatest example of what can be achieved in space with little or no government involvement.

But Sentinel also flags up the fact that, armed with an asteroid strike early warning, governments worldwide may have to co-operate to an unprecedented degree. May describes the catastrophe of impact as “a world problem that is avertable” if all nations participate in a solution. But he did qualify his optimistic conclusion that Rosetta-style technology can deflect a collision-course asteroid with a “probably”.

That “probably” is more than the natural prudence of a scientist who understands that goal-oriented research, however promising, can raise as many questions as it supplies answers. As Bill Nye, chief executive of the Planetary Society, said from San Francisco, if the Tunguska strike had happened 6.5h later, the meteor would have struck Berlin – devastating a lot more than 80 million trees and changing the course of 20th Century history. If a deflection mission, however well-intentioned, based on one nation’s or one organisation’s initiative were to go a little bit wrong, the geopolitical impact could do as much damage as the meteor.