Since Capt Simon Hardy revealed in Flightglobal/Flight International his calculations about where Malaysia Airlines Flight MH370 is likely to have come to rest, the Australian Transport Safety Bureau – leading the MH370 search team – has spoken at length to him.

One of the features of the Flightglobal release of Hardy’s work is that, despite worldwide interest in his work, nobody – yet – has suggested his calculations are anything but logical and mathematically sound.

Hardy has now shared with the ATSB all the logic and mathematics he employed, including the details of some potential variables that depend on what the cause of the mysterious disappearance was. Here are some of them:

If MH370’s final flight path was indeed a deliberate act by someone who took control of the Malaysia Boeing 777, one of the options for any individual looking for uninterrupted control would be to don an oxygen mask, depressurise the aircraft and switch off the two air conditioning packs. This would ensure that anyone not connected to a long-duration oxygen supply would soon be unconscious.

If the packs were both off from a point early in the flight for all (or part) of the rest of the journey, the aircraft’s range would be increased by a finite amount because no energy from the engines would have been used for cabin pressure. Since this is not an expected configuration the figures are not available, but Boeing and Rolls-Royce could calculate them. 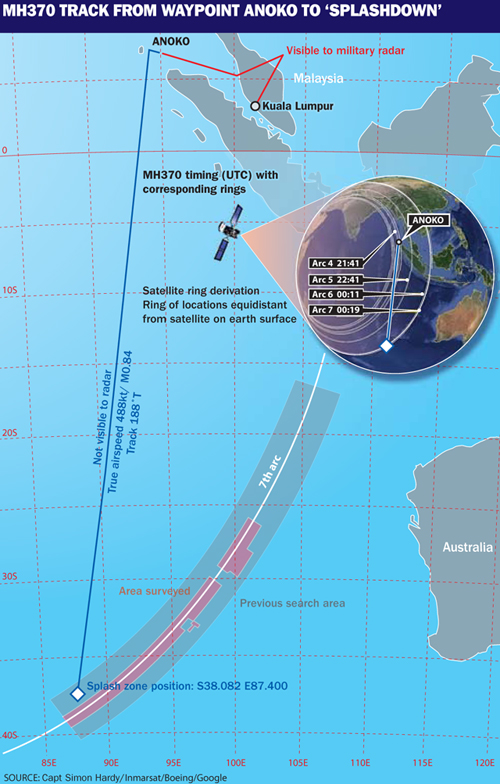 Regarding the programmed search area, it is based on the aircraft having run out of fuel at about the same time as the seventh satcom “handshake” with the aircraft’s communications system. But Hardy observes that the 7th arc is defined by “an electrical event, not a crashing event”. He points out that the system was working at 00:11Z (crossing 6th arc) and then was rebooting at 00:19Z (crossing 7th) but never finished rebooting. “It was ON, then OFF, then ON again, and then OFF again.” He comments: “I would expect a crashing event to be ON then OFF.” The logic, therefore, is that although the “splashdown” site would be close to the seventh arc, it would probably be beyond it, perhaps by up to 100nm.

The ATSB agrees that the 7th arc was not precisely the site of the splashdown, but the variables that Hardy proposes could mean the aircraft is further from the 7th arc than the ATSB suggested when it posted its latest thinking on its website on 23 December.

There are also some considerations which would depend entirely on the mindset of the person flying the aircraft at the end of its journey, and that is an unknown. But anyone who has the task of finding the aircraft would need to consider these options that might have influenced its precise location.

At some point during the final descent, when the ocean surface would have been in sight, Hardy believes, the person flying the aircraft would conduct some manoeuvres to prepare the aircraft for successful ditching. After all, he suggests, no floating wreckage from the aircraft has been found, and one way of ensuring nothing floated to provide clues to its resting place would be to ditch the 777 carefully, resulting in the minimum possible structural damage so it would sink to the bottom of the ocean without scattering floating wreckage.

Considerations for a successful ditching depend on the direction of the surface wind, the waves and the swell. If there is a swell, it is normally the dominant consideration, and the ditching technique is to land along the swell, not across it. So the final manoeuvring pattern, assuming the pilot’s mindset followed this logic, would be influenced by these considerations, and whatever is known about the surface wind and sea state in the area at the time should be taken into account.

Hardy ventures this conclusion: ”The indication is that the aircraft started descent just before the 6th arc (from 43,000ft) and continued through 30,000ft before reaching the 7th arc. If it was at 28,000ft at the 7th arc it still has about 100nm more to fly. For ease of reference, that point is near S40 E87 .” To this consideration, add the final possible manoeuvring to ditch.