While the Royal Air Force is considered a fairly experienced operator of UAVs, its sister services are not. The Culdrose conference was designed to serve as a forum to discuss the pros and cons of introducing UAVs into routine operations that were, until recently, dominated by manned aircraft.

“We are seeing the most incredible leap in unmanned technology that is really starting to transform the way we operate at sea, overland, and even in the civilian enterprise,” Rear Adm Keith Blount, assistant chief of the naval staff for aviation, amphibious capability and carriers, told the conference.

“This creates for us the most intoxicating mix of opportunity, but brings with it challenges as well,” Blount says. “In an airspace becoming more and more cluttered with various pieces, not least with unmanned technology, we have to understand how, in that airspace, we can operate safely.”

Blount says the use of unmanned technology is “absolutely embedded in the conscience of the main navies now”, as well as air forces and armies.

One notable example is the RN’s introduction of ScanEagle, procured under a contractor-owned, contractor-operated two-year urgent operational requirement in 2013. This has since been extended until 2017. “From a naval perspective, I watched in awe as we started to operate ­ScanEagle off ships,” Blount says. “I am amazed by the potential that one small UAV can bring to maritime operations. Yes, it’s a small area in which it is operating, but even within its own limitations, the capabilities it brought were incredible.” 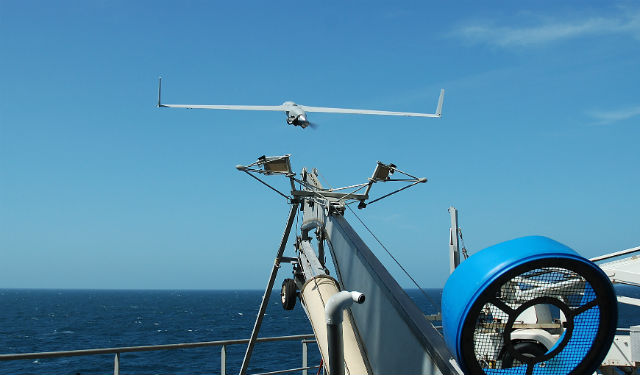 When ScanEagle deployed to theatre for the first time on board the Type 23 frigate HMS ­Somerset in support of the UK’s Operation Kipion – a stabilisation effort in the Gulf and Indian Ocean – the feedback was generally positive, Lt Cdr Rudi Lorenz, UAS capability manager at navy command headquarters, and Somerset’s UAS commander, says.

“We sailed into theatre and operated for months under the UKMCC [UK Maritime Component Command], and we provided some good output and learnt an awful lot while we were out there,” he says.

“Persistent and intimate ISR [intelligence, surveillance and reconnaissance] is why we had ­ScanEagle, and it delivered that very well indeed,” he says. “Once we’ve done overwatch with persistent ISR, we start to look at surface search. ScanEagle has an electro-optical/infrared [EO/IR] camera, but that doesn’t really give a great find function.”

Despite this search capability not being the primary function of ScanEagle, it did not stop the navy trying to get around it: “We found that if we got the camera looking up and onto the horizon, we were able to achieve a very limited search function. If we did enable a find function within our air system itself, we may well see a game changer with regards to manned aviation hours.”

Although the number of personnel required for the UAV detachment did not represent a reduction, says Lorenz, the contribution of the combined assets was an overall improvement.

“On Somerset itself, we did not reduce the manned hours; what we did manage to do is curtail some of the flying the [AgustaWestland] Lynx [helicopter] was doing on surface search sorties by using ­ScanEagle, then bring the Lynx back and preserve it for more important things later on.

“The Lynx was able to fly the hours it does ordinarily, but it was able to specify better tasking,” he says. “In terms of ScanEagle, while there isn’t a physical reduction in manpower on board, you’re seeing 24h airborne operations for the same amount of manpower you’d have for a manned asset conducting maybe a 10-12h alert period.”

If a UAV were to be introduced with the search capability that is missing from the current ­ScanEagle configuration, Lorenz is confident that a manned asset like the Lynx could be employed more intelligently.

Elsewhere, the British Army operates the Lockheed Martin ­Desert Hawk UAV and is in the process of introducing the Thales WK450 Watchkeeper, both of which will eventually be incorporated into the same brigade.

“We’re not really into the strategic UAS space at the moment; we are in the area of the tactical UAS,” Maj Tom Luker of 47 Regiment, Royal Artillery – part of the army’s 1st ISR Brigade – explains.

Luker praises the Watchkeeper UAV’s 16h endurance and its Thales I-Master radar: “The key thing about the aircraft is that it doesn’t just have the EO/IR, but the I-Master radar, that can be operated in a synthetic aperture radar [SAR] mode or a ground moving target indicator [GMTI] mode,” he says.

“So you can cross-cue yourself… when you are trying to look with EO/IR, your ranges are relatively limited, to 7-8km. But with a synthetic aperture radar, you can build up a big picture at about 30 miles.”

However, while Luker admits that the system is fairly easy to deploy, he notes that there is quite a lot of associated ground equipment, so “it’s a deliberate operation; you won’t just be doing that off the cuff”.

“We are not yet at full operational capability [FOC], but we are building towards that in 2017. So we are only flying out of ­Boscombe Down and are quite limited to only fly over Salisbury Plain,” he adds. Such complexity contrasts with the operation of the Desert Hawk, which is a relatively straightforward UAV to fly.

“This is a complex system, which is not easy to operate. So we’re building capacity – but this is taking some time. We’re also often affected by poor UK [weather], especially wind.”

Watchkeeper underwent an eight-week deployment to ­Afghanistan in 2014 as the UK wound down its operations, in order to test the UAV in a live environment.

“In one way this was a great thing, because it proved it was operationally viable and valid,” Luker says.

“The downside is that it is fixed in people’s minds that it has been in operations, so you must be at FOC. Sadly, both factors are true and not true simultaneously.” He notes that the SAR/GMTI capability was proven in Afghanistan, and the EO/IR sensor was clearer than on its predecessor, the Elbit Systems Hermes 450. While the sensor itself is the same, the computing behind it has been modified, so the image is sharper.

“We are under a reasonable amount of pressure to fly and build capability,” Luker adds. “There’s a certain amount of scrutiny that isn’t always helpful. We’re looking to go to overseas locations to build up a good portfolio of hours flown and to build up our experience in the air.”

Access to airspace is never simple, and while ­Watchkeeper flies in safe segregated airspace from ­Boscombe Down, the platform only comes third in terms of priorities at the airfield.

“But we are on track for full operational capability in 2017, and this is fully funded out to 2042, so it is ongoing,” says Luker.

The Royal Marines is not a conventional operator of UAVs, but utilises data feeds from a variety of airborne sources as it serves as the bridge between maritime and land operations.

“We’re tasked with collecting information superiority to win the battle,” says an officer from 30 Commando Information Exploitation (IX) Group’s ­Surveillance ­Reconnaissance Sqn (SRS). “The task for SRS is not just to go out there and find stuff – we are targeted now in how we do our business.”

He says the same six-man teams have to be able to conduct the same missions in environments ranging from mountains to the jungle, desert and urban operations. Of these, the desert is the only one suited to UAV use. “I don’t have a bottomless budget to go out and find the perfect answer for all of those set-ups,” he adds. “Urban is really a growth area for us, because our adversaries are looking to operate in that environment more.”

The marines operate the Prox ­Dynamics Black Hornet nano UAV, which in August was brought into the UK’s core equipment set. “We’ve taken that [urgent operational requirement], brought it back into core, and in SRS fly that out [0.8nm] 1,500m at 300ft,” the officer says. “We’ve also been able to fly this in the jungle environment, which has been really useful.” The type is easily affected by weather, he says, but that is less of a concern. 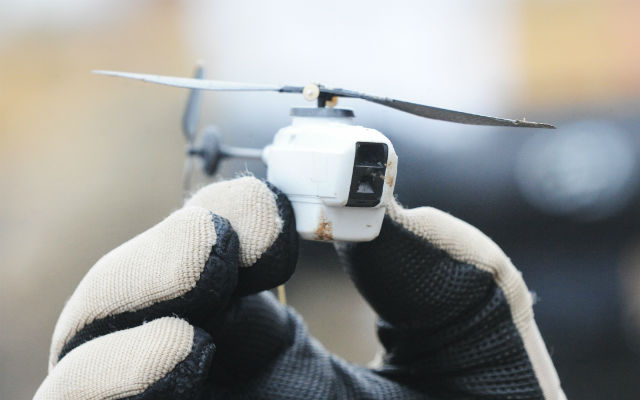 “The time I would use this, is when I don’t want to put the team on the ground; on a nice sunny day when we don’t want to be seen, this [Black Hornet] is perfect.” The officer adds that he is constantly looking to lighten the load for the marines, which needs to be balanced out with capability.

“My frustration is I have to lighten the load on the ground,” he says. “The next issue is, do we need the platform or the feed?

“The advantage of owning a platform is it is organic and we can use it whenever we wish, however what would be better to lighten the load, would be a tablet – you can have somebody else fly the platform that you own.”