More than a third of all fatal accidents that have occurred to jet airliners while en-route are caused by some form of deliberate action. But a significant number of other factors can also come into play.

Details about the accident involving a Malaysia Airlines Boeing 777, which disappeared on 8 March while flying between Kuala Lumpur and Beijing, remain sketchy as the search for the aircraft intensifies. But en-route accidents to airliners are extremely rare. According to Flightglobal’s Ascend Online database, such accidents account for just over 10% of all fatal crashes occurring to western-built jets while airborne.

Including the MAS 777, Ascend Online shows that a total of 46 western-built jet airliners have crashed with the loss of all on board while in the en-route phase. Of these, 13 were caused by sabotage, two more by hijacks and one was shot down. Three more were caused by undetermined causes where flightcrew suicide is suspected.

These various examples of deliberate action account for 19 of the accidents – and exclude hijackings that began during climb or descent, such as the four during the 9/11 terrorist attacks. 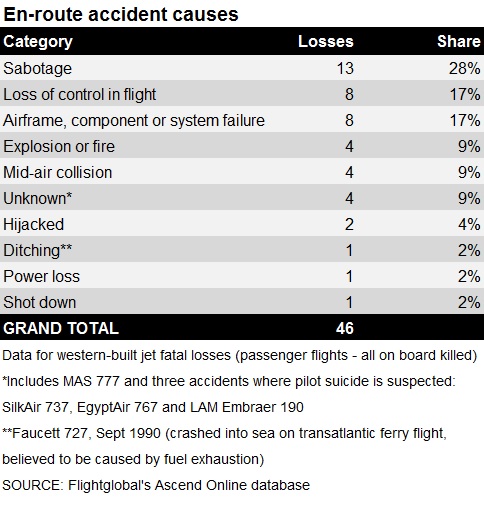 After deliberate action, the most common cause of an en-route crash is loss of control, which accounts for eight events. Included in these is the 2009 loss of an Air France Airbus A330 over the Atlantic.

The next most frequent cause of aircraft to be lost while en route is some form of airframe, component or system failure. Such events have resulted in eight accidents. The most recent accident to be caused by structural failure occurred in 2002 when a China Airlines Boeing 747-200 crashed as a result of fatigue associated with a long-standing repair following a tail-scrape.

Four accidents were caused by in-flight explosions or fires, the most notable being the loss of a Swissair Boeing MD-11 in 1998, which is believed to have been the result of a malfunction of the in-flight entertainment system.

A further four accidents were caused by mid-air collisions. Other causes include suspected fuel exhaustion and loss of power (one each).

In some cases, in-flight events happen so rapidly that the flightcrew are unable to issue any form of mayday, but it is extremely unusually.