The International Space Station has been the focal point of human spaceflight activity for so long now that the outpost can seem like a permanent, if remote, feature of our planet. While not as significant as, say, Hawaii or New Zealand, the ISS is better known than any number of smaller rocks and islands and, at a little more than 400km (250 miles) altitude, closer than most of them – depending on where one starts from.

The ISS certainly feels like a permanent fixture from a budgetary perspective.One estimateof the total programme cost over the 30 years from its beginnings through 2015 stands at $150 billion. That’s some $5 billion per year spread unevenly between partners NASA, Roscosmos and the European, Canadian and Japanese space agencies – or a bit less than the gross domestic product of theIsle of Man.

Whether that is a lot or a little depends on one’s view of the importance of human spaceflight (not to mention of a lightly populated island in the Irish Sea), and it is important to note that the heavy costs of actually building the station are largely in the past. Nevertheless, as the station approaches the 15th anniversary of its first crew arrival, it is not surprising that the money to keep the ISS flying should be as widely discussed as its ongoing contribution to scientific knowledge or its status as an icon of international co-operation. In short, while the engineers reckon the station could function safely through to 2028, the politicians have not said for sure that they will keep paying for it through to 2020, the end-point of the current ISS operating agreement.

A year ago, the White House gave NASA the word that it would support the extension of the US commitment to the ISS through to at least 2024. But that extension costs nothing yet, and is dependent on the other ISS partners joining in.

As things stand, 2020 remains an unfunded statement of intent. When the heads of the ISS partner agencies met in Paris in November 2014, they “reaffirmed their support for continued ISS operations” with inspiring declarations about how the station “benefits all of humanity” by “enhancing international co-operation and understanding” and driving innovations ranging “from biomedical breakthroughs to new materials and technologies”. But while they “noted the US commitment to extend ISS utilisation to at least 2024 [and] the ongoing work by other governments for a similar extension”, they neither came to the meeting nor left with any firm funding formula.

The challenge was well summed up a month earlier by NASA administrator Charles Bolden on the sidelines of the Royal Aeronautical Society’s 2014 space conference in London. All the partners, he says, are looking for ways to convince their governments to continue ISS funding. And, he stresses, the programme still needs the commitment of all its members through 2020, then to 2024.

And, added Bolden at the time, a key date to watch was 2 December 2014, when government ministers from the European Space Agency’s member states were to meet in Luxembourg to negotiate budgets. During the event, that ministerial meeting provided somewhat equivocal support for the ISS. The meeting’s resolution described the agreed “binding financial commitment” as “an essential step in fulfilling [member states’] pledge to work towards ensuring Europe’s continued participation in ISS co-operation up to the end of 2020”. With financial pain palpable in Europe and several member states preparing for general elections in 2015, while others – notably Italy – are only a crisis away from an election, it can be expected but not firmly assumed that all of ESA’s governments will keep writing cheques. There was no mention of 2024. 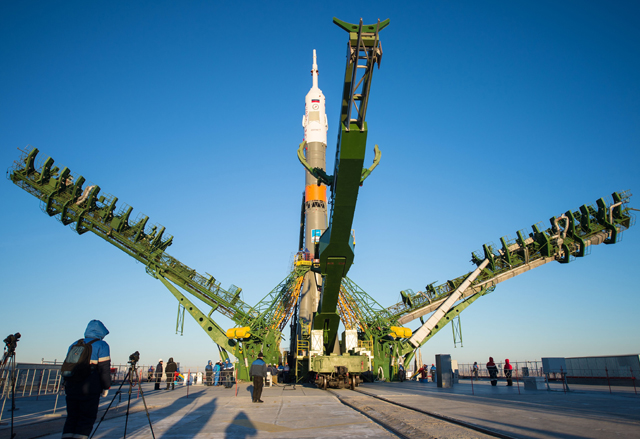 Complicating the situation is Russia, and in particular the deteriorating – or at least unstable – state of relations between the Bear and the West. As 2014 drew to a close, Russian state news agency TASS reported that while 2020 had been agreed and 2024 was under discussion, deputy prime minister Dmitry Rogozin had declared that, to Moscow, there was no “commercial” reason for sticking with the ISS past 2020. Meanwhile, reports TASS, two new Russian modules being built for the ISS – and set for launch in 2017 and 2018-2019 – would not be attached to the ISS until Roscosmos decides on its post-2020 plans. If that sounds like a classic catch-22, TASS quotes Roscosmos chief Oleg Ostapenko saying that the two modules could be used as part of a new Russian space station.

Meanwhile, the diplomatic stand-off over events on the ground in Ukraine is understood to be delaying any decision about Russian participation in the ISS.

If Russia does decide to have its own space station – and start building it later this decade – the prospects for the ISS to continue beyond 2020 would have to seem dim. An engineering lifespan to 2028 notwithstanding, NASA’s 2024 concept is probably the limit for ISS operations, given its longer-term planning around a human mission to Mars in about 2035. As one of Bolden’s deputies, William Gerstenmaier, put it in response to the Obama administration’s January 2014 nod to run the station through 2024: “I really see the space station as the first step in exploration. It is gaining us operational experience in a distant location, well beyond the Earth.

“Those are the kinds of experience, technology and hardware that we need to go to Mars, so all that feeds forward.”

That vision was fleshed out later in the year to another RAeS audience by NASA chief scientist Ellen Stofan, who described ISS operations as the first phase in an international and “stepwise plan” for reaching Mars. That plan sees the ISS as a platform that supports research into issues like the medical implications of microgravity living without exposing astronauts to the hazards of deep space.

A second phase should begin in the early 2020s, and at that point, says Stofan, it is assumed that a winding-down of ISS spending will free up cash for more ambitious missions to the space between the Earth and Moon. These would test our ability to live and work in deep space while still having what she calls the “safety valve” of being able to return home in a few days, rather than the eight or nine months it would take to return from Mars.

The idea is to start with a mission, probably robotic and maybe as soon as 2023, to bring an asteroid from far beyond the Moon and “park” it at a Lagrange point between the Earth and Moon, where the two bodies’ gravities balance. An asteroid could sit at such a point in a stable orbit, and hence be accessible for study by astronauts – who in addition to doing research on a space rock, would be testing operational techniques and technologies that would, in principle, open the way to a further phase of “Mars-ready” development.

That so-called “Mars roadmap” may be led by NASA, but it is not a NASA invention; the various space station partners are all aboard, and all stress that nothing significant can be achieved by any one of them acting alone – even by NASA, which has the biggest budget. However, to assume that the Mars plan will continue to clear technical, budgetary and political hurdles may be a big assumption.

As ever, politics cannot be disconnected from human spaceflight. Whatever may come in Moscow or European capitals, when a new US administration takes office early in 2017, it may – as the Obama administration did – revisit the long-term NASA plan. Coming to office just after the onset of the worst financial crisis since the Great Depression, it was no surprise that President Obama cut the legs off of George W Bush’s Constellation programme, with its centrepiece of a return to the Moon by 2020. Constellation was axed in part because it was deemed unaffordable, and it was replaced by the longer-term vision of studying an asteroid and eventually visiting Mars. Significantly, that Obama space plan satisfied the American public’s desire to feel like the nation was blazing trails in the cosmos without actually committing too much in the way of heavy near-term spending. NASA’s budget has been held steady at about $17 billion yearly.

One survivor from Constellation is the Space Launch System rocket programme which, if completed, will be the most powerful launcher ever and could fly as early as 2018. SLS, once jokingly referred to as the Senate Launch System for persisting more to satisfy lawmakers’ needs for a glory project than for any obvious operational purpose, stands today as, literally, the motor behind NASA’s ambitions for a manned Mars mission in about 2035.

Also escaping the Obama chop was the Lockheed Martin-built Orion capsule, which starred in an apparently flawless December 2014 maiden test flight. With a service module being developed by Airbus Defence & Space, based on its Automated Transfer Vehicle robotic ISS resupply ship, Orion promises – with the SLS behind it – to take four astronauts to deep space from the early 2020s.

Alternatively, the SLS-Orion combination could carry six astronauts to low Earth orbit – to, say, the ISS. By the time Orion is ready to carry crew, however, that role will be filled by two other US spacecraft. By then, both the Boeing CST-100 and the SpaceX Dragon capsules – commissioned by NASA under its so-called Commercial Crew programme – will have come online to restore the human launch capability lost with the retirement of the Space Shuttle fleet in 2011.

Neither CST-100 nor Dragon – nor the Dream Chaser mini-shuttle being developed by Sierra Nevada, which was not selected for the final phase of Commercial Crew – are capable of the deep space missions planned for Orion. NASA, therefore, can look forward to a virtual embarrassment of riches when it comes to crew launch capability, which will surely be a big improvement on the past several years, during which it has had to buy rides on Russian Soyuz rockets to get its astronauts to the space station.

But it is also possible that, less than a decade from now, NASA may find itself with a stable full of spacecraft and nowhere to send them. Even if the Mars plan keeps moving forward, there is not much time to achieve the technically ambitious asteroid redirect mission by the time the ISS era ends in 2024. If the asteroid plan falls foul of money or politics, or if ISS co-operation ends in 2020, or both, quite a few astronauts could find themselves all dressed up with no place to go.