Despite having performed a maiden sortie some three years ago, details remain sketchy on the flight-test campaign of the BAE Systems Taranis unmanned combat air vehicle (UCAV) demonstrator.

So far, there have been three test phases – the most recent taking place in 2015. Although the manufacturer declines to detail that effort, it has divulged the rationale and intentions behind previous evaluations.

Addressing the Royal Aeronautical Society on 11 May, Paddy Bourne, chief engineer for UCAVs at BAE, said the combination of advanced low observability (LO) technologies that have to be incorporated into a UCAV design proved a challenge, even for a seasoned developer of military aircraft.

“From the point of view of the programme there were a number of challenges… a number of issues that are difficult in that context to be able to integrate together,” he says. “Elements around integrating secure communications onto an LO autonomous vehicle, how you integrate missions sensors, propulsion systems, the exhaust, and how do you control the vehicle.

“All of those things together combine to make the overall integration and overall design of the vehicle more complex and more difficult to both design and also to clear and fly.”

Bourne adds that another area that poses a problem in the development of LO technology is the requirement to clean up the airframe – removing protruding items such as probes.

He says that “open doors, and the number of holes and vents” are elements that need to be considered in a stealth design, and “all need to be perfectly controlled.

UCAV performs a substantial number of operations autonomously, from take-off to flight to landing. 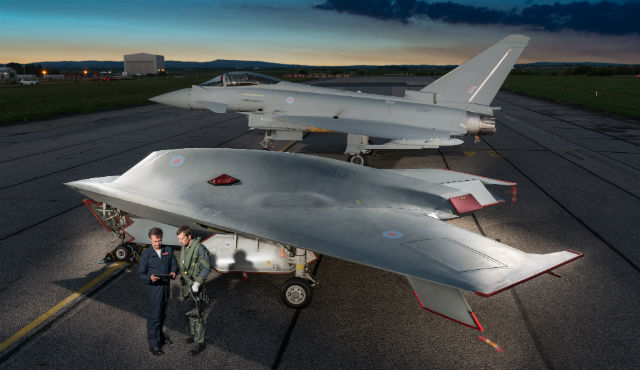 Although the Taranis’s off-the-shelf Rolls-Royce Turbomeca Adour engine is manually started, the aircraft is able to taxi to the runway “entirely automatically”, then take off and carry out a number of functions without pilot input.

It will then fly into a test area, and then “to a greater extent, but not entirely, [we] allow it some freedom of operation", says Bourne. Typically it is presented with an area inside a test range in which it is required to locate a target.

Taranis is designed to enhance the aeronautical experience that BAE has gained through numerous projects, producing a stealthy, autonomous weapon system.

When pressed on whether true stealth capability had been achieved, Bourne simply says that “the customer is very happy”.

“It continues at a pace, and we aren’t cleared to say what’s next,” he adds.

Test flights were carried out at the Woomera test range in Australia. “We elected to operate over a sterile area… by doing this and ensuring the area was clear of all personnel, all we had to prove was that as long as we stayed inside that sterile area, we’d have a safe trial,” says Jon Wiggall, lead flight-test engineer for Taranis. The location in South Australia also benefits from low levels of electromagnetic interference, he says.

A significant amount of Taranis’s flight testing was carried out in an automatic mode, says Wiggall, one of three flight modes available.

When in automatic flight – the primary mode for take-off, general flying and landing – Taranis is essentially following 3D waypoints, similar to the autopilot on a commercial airliner or a Eurofighter Typhoon.

When in autonomous mode, however, the aircraft “starts to think and self-navigate”.

“It can self-navigate within a boundary of set constraints,” Wiggall says. “It does have limitations on what we give it in the mission plan – it can only fly in certain areas – but it does think for itself, it will navigate, and it will search for targets.”

The aircraft self-plots a route, and the aircraft will fly around until either it has completed its mission or tasking, or it is instructed to return to base, Wiggall says.

The third mode, manual, provides a fail-safe, although this was rarely used: “Manual for Taranis is a back-up mode, and is very much a mode where something has gone wrong and we want to get the aeroplane back,” Wiggall says. “We usually get the aeroplane back under automatic control if things aren’t going great – it gives us a get-it-home capability.”

Although no system errors generated a need for manual flying, the mode was utilised to evaluate its functionality. “We didn’t want to get into a real emergency and find that the simulator isn’t representative,” says Wiggall.

Beyond Taranis, the technology developed will roll into the Anglo-French Future Combat Air System programme, which is currently in a two-year feasibility phase, ahead of the likely assembly of an initial prototype.

“We are hoping that we will get a contract for that in the next 18 months,” says Bourne. “Negotiations are under way.

“All flight trial objectives were met – the customer had a big smile on his face.”