Since the 4 February fatal crash in Taipei of a TransAsia Airways ATR72-600, 49 pilots in the carrier’s ATR fleet have taken part in an examination of cockpit emergency drills, at the orders of Taiwan’s civil aviation authority. The authority has since stated that the competency of some of them needed to be “strengthened”.

The country’s Aviation Safety Council is investigating whether – after TransAsia flight GE235 had suffered a No 2 (right-hand) engine flameout during the early climb – the crew mistakenly shut down the good No 1 engine, leaving the aircraft effectively a glider.

The ASC says it is reviewing the carrier’s training syllabus, crew resource management records and engine-failure checklist. The recent accident, in which 40 of the 58 people on board are known to have died, is the second fatal ATR72 accident the airline has suffered in the last twelve months. The other, on a 23 July 2014 non-precision bad-weather approach at night to Magong airport in the Penghu Islands, the aircraft hit trees during an attempted go-around and crashed, killing 48 of the 58 people on board.

After the Taipei crash, The ASC took the unusual step of publishing part of the flight data recorder printout for the crashed ATR72-600 almost as soon as it was downloaded. The printout they released concerned only the data for the engines. It is a series of graphical lines describing the state of 12 different engine parameters against a timeline, with barometric altitude also displayed. The graphs provide numerical values for some of those parameters; others just show whether a switch is on or off – such as the fuel shut-off valve, for example. This data tells the investigators, in great detail, what happened, but still not – at this stage – why it happened. 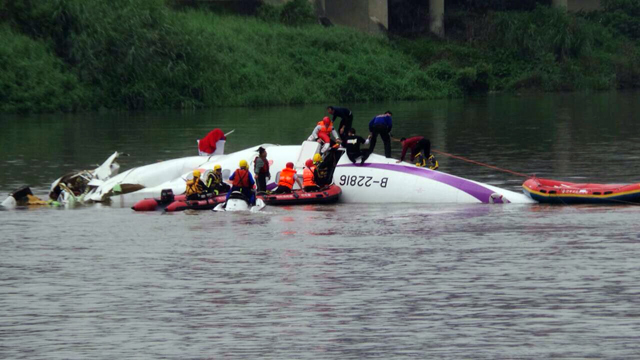 The total airborne time for flight GE235 was only 2min 40s after it took off from runway 01 at Taipei’s Songshan airport, bound for Kinmen. All was going well for 45s after take-off, but as the aircraft was climbing through about 1,200ft (pressure altitude) the turbine temperature for the No 2 engine dropped and the engine auto-feathered, confirming that the crew had suffered the engine “flame-out” they reported in a Mayday call to ATC without specifying which engine. The aircraft continued to climb on the power from the remaining No 1 (left-hand) engine, reaching a maximum height of about 1,650ft.

The FDR graph shows the crew allowed the power lever (throttle) of the failed No 2 engine to stay where it was, and started slowly pulling back the power lever of engine No 1. When the lever had been retarded almost to idle setting, the fuel was shut off and the left engine also feathered. Also, just before they shut off fuel to No 1, the crew advanced the throttle of the failed No 2 engine as far as they could, as if it would provide them with additional power.

From that time onwards the crew had 1min 15s of gliding time before coming down in a river. Describing information from the cockpit voice recorder, the ASC says that, with 27s to go before impact, “the crew began shouting to ‘restart the car’”. In the widely broadcast videos of the final seconds of the crash, both the previously feathered propellers were turning, probably in the process of restart.

The CAA said ten TransAsia ATR pilots were to undergo intensive retraining on emergency procedures following tests, and as Flight International went to press there were another 19 pilots who had yet to be tested. The crew evaluations have forced TransAsia to reduce capacity on routes served by the ATRs – at a time of high demand due to the impending Chinese new year holiday – and the airline is deploying Airbus A320s to cope with the shortfall.

The airline says it is also planning a “comprehensive” programme, lasting six to 12 months, to improve its safety management systems, assisted by US and European specialists, starting in early March.

Perhaps the most famous previous case in which a disaster occurred because an engine failed and then the crew mistakenly shut down the good engine (rather than the damaged one) was the British Midland Boeing 737-400 crash at Kegworth, UK, in 1989. In that case 47 of the 126 people on board died.

The investigation continues, led by the ASC with co-operation from China and French investigation authority BEA, as well as technical advisers from manufacturer ATR.