ANALYSIS: The theories and fantasies about MH370

The least unlikely cause for the disappearance of Malaysia Airlines flight MH370, based on what little is known about the final flight, is that a person with a sharp mind and a plan, but who was emotionally unbalanced, took control of the aircraft.

It could have been one of the pilots, or someone else on board who had the means to persuade the pilots, quietly, to depart from official cockpit security procedures. The best way of doing that would be for the individual to be known by – even friendly with – the pilots.

Cabin crew? Nobody knows, and there is certainly no direct evidence.

There is some circumstantial evidence for the Malaysian authorities’ belief that MH370’s ­disappearance was the result of “deliberate action by someone on board”. The most publicised bits of circumstantial evidence are the switching off of the ACARS ­technical datalink and then the transponder, followed immediately by a marked departure from the aircraft’s planned route ­combined with a sudden radio silence.

The “emotionally unbalanced person” theory is based on the fact that no one can imagine the motivation for masterminding what has happened, because no obvious purpose appears to have been served by it. But somebody who is suicidal or otherwise in a disturbed emotional state is not bound by normal logic.

Another argument for this theory is historical. There have been many cases in which pilots of aircraft carrying passengers have committed suicide by deliberately crashing the aircraft: a Silk Air Boeing 737 pilot, an EgyptAir 767 pilot, a Royal Air Maroc ATR 42 pilot, and last year a LAM ­Mozambique Embraer 190 pilot. 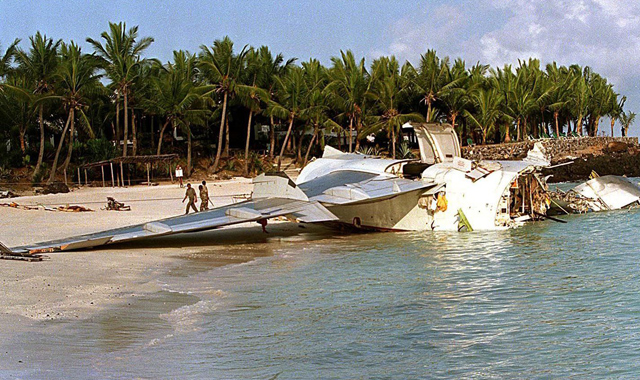 An Ethiopian 767 was deliberately crashed in 1996

There is also a history of persons – other than the pilots – bringing aircraft down because they had a grudge against the airline or society: a Pacific Southwest ­Airlines BAe 146 in 1987 and an Ethiopian Airlines 767 in 1996. Then there was 9/11, where the perpetrators had a grudge against an entire country.

There is no record – yet – of someone sabotaging an ordinary airline flight for the purpose of killing a specific person or group on board, but the possibility – in a case as unusual as MH370 – must be a part of the investigation.

A conspirator with such a ­motive would have had a reason to want no one ever to find out what really happened, so the southerly flight path believed to have been followed by MH370 to an oceanic grave would have been a brilliant plan. The only trouble with this theory is that, like all the others, there is no direct evidence for it.

Sabotage, frequently invoked as a possible cause for an aircraft accident when no immediate explanation is available, has been mentioned less by the theorists in the MH370 case, on the grounds that, if it had been bombed, it would not have flown on for so long. Well, it might have done if the damage was limited to, say, ­creating a hole in the hull that would have caused a sudden decompression – and that could be a reason why everything went quiet over the Gulf of Thailand.

Returning to the theory of deliberate action, commentators have advanced many ideas as to how the perpetrator kept everyone on board quiet while carrying out his plan, including incapacitating them by deliberately depressurising the aircraft at high altitude.

These theories are guesses, but the deliberate decompression theory cannot be ruled out. Yet there is another less spectacular reason why the passengers would have been passive. If the pilots were the perpetrators or if the means of taking control was indeed quietly achieved, at 02:00 the passengers would have been sleeping or trying to sleep, not worrying about which way the aircraft was heading, and most would stay that way until dawn or beyond.

During the early part of the flight, while the aircraft was within range of land, the passengers would not have chosen to use their mobile phones unless they were aware of a risk to their lives, simply because they would have known their families would also have been asleep.

The theories invoking progressive damage by an onboard electrical fire are difficult to stand up, because fires are not sudden.

The existence of a fire is known by smoke, fumes or an alarm before it disables the ­aircraft, and pilot reaction in such a case would have been to put out an instant emergency call, which they did not do. ­Finally, a spreading fire would not have taken six hours to bring the aircraft down.

The theories – mostly involving conspiracy – about the aircraft having landed safely somewhere can be ruled out. Those who believe that it landed at the US base at Diego Garcia have clearly not used Google Earth to see how visible the aircraft would be if it were there – or indeed at the old UK Royal Air Force base on Gan in the Maldives, or other islands in the Indian Ocean.

If the calculated search position is wrong and the aircraft could have crashed on land, a jungle location anywhere within range of Kuala Lumpur remains implausible but possible. The question then would be why no country’s military radar detected such a penetration of their ­airspace, or why they are not ­declaring it.

Will MH370 ever be found? If it went into the southern Indian Ocean, probably not.

The facts are these: no floating wreckage had been found six weeks later. The accuracy of the satellite information on which the search area has been calculated is far from guaranteed, so the search team may not be looking in the right place.

It is hard enough finding wreckage in the deep ocean when the position where the aircraft went missing was accurately known, like Air France 447. In that case, floating wreckage was discovered within a couple of days, but it took two years to find the wreck on the sea floor even when the last known position of the aircraft was a fact in which the search teams knew they could have confidence, so the huge financial investment in looking for it was considered worthwhile.

But even if the search teams are looking in the right place, AF447 belly-flopped into the water at a vertical speed of about 120kt (220km/h), with very low forward speed, so the wreckage parts were quite large and thus easy to detect on the surface and on the seabed. Fortunately for the searchers, the main wreckage came to rest on a firm, flat plain on the seabed, among sub-sea ­mountains.

There is no evidence of how MH370 impacted the water, but if it hit the surface much faster than AF447 and with a nose-down ­attitude, the pieces would be smaller and thus more difficult to detect.

To add to the searchers’ ­difficulties, oceanographers ­report that the area of the seabed currently being scanned is very silty. ­Aircraft parts, ­especially heavy ones like ­engines, could sink into the silt, making detection by sonar even more difficult.

If parts from MH370 are ever found, it may be when seat cushions or other lightweight ­debris washes up on the shore of Australia or Antarctica.

Unfortunately, it looks as if this is the most probable scenario.

Meanwhile, airlines across the world may be facing a new regulatory mandate based on the lessons learned from the disappearance of Malaysia Airlines flight MH370, Rockwell Collins’ chief executive Kelly Ortberg says.

The ongoing, six-week-old search for the missing Boeing 777-200ER in the South Indian Ocean has already prompted IATA to form an expert task force to consider options for tracking commercial aircraft.

“The task force will vet potential solutions to this problem and come up with some recommendation,” said Ortberg, speaking to analysts on 18 April. “So I do see a move upward to some sort of a mandated change here.”

Ortberg says he wants Collins – one of the world’s largest avionics and aircraft connectivity suppliers ­– to play a role in the IATA task force’s deliberations.

“We certainly have to think we’ve got some good things to offer,” Ortberg says.

The task force is planning to meet in May for the first time.

The task force is intended to take a comprehensive, global approach to responding to the MH370 disappearance, IATA director general and chief executive Tony Tyler said on 1 April.

“This is not the time for ­hastily prepared sales pitches or regional solutions,” says Tyler.

Flight MH370 – carrying 227 passengers and 12 crew – went missing on 8 March over the South China Sea between Kuala Lumpur and Beijing. The aircraft’s radios, transponder and automated datalink all stopped transmitting a few minutes after the crew bid farewell to Malaysia air traffic control coverage and before it was picked up by Vietnamese controllers.

Despite a confusing series of announcements by Malaysian officials, it was discovered by Inmarsat that a communications antenna on board the aircraft continued “pinging” a satellite although it passed no data.