The dramatic crash of an almost brand new ATR 72-600 into the Keelung river will in no way help TransAsia Airways gain traction in a market where it is already a relatively small player.

It is the smallest of three airlines listed in Taiwan, the other two are state-owned China Airlines and private carrier Eva Air, which is linked to shipping conglomerate Evergreen Group. TransAsia was launched in 1988, although it had a previous incarnation in the 1950s.

Market share by seat capacity on services out of Taiwan, Feb 2015 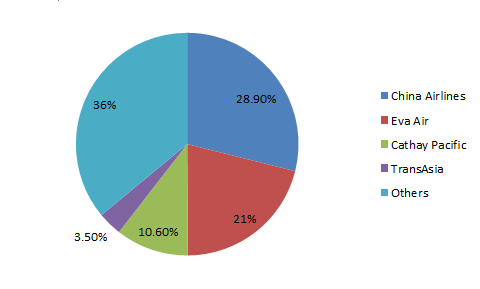 Flightglobal's Ascend Fleets database shows that the carrier has 20 aircraft in service, comprising 11 ATR 72s, seven Airbus A320 family jets and two A330s. The fleet is relatively young with an average age of nine years. It has a further 16 A321s and four A330s on order.

FlightMaps shows that the carrier mainly operates services to mainland China and also to Macau, Japan, Korea and Thailand. Its top routes are from Kaohsiung and Taipei to Magong (the western part of Penghu Island), and from Taipei to Kinmen off mainland China.

Its 11 ATR 72s are deployed domestically from Taipei to Hualian, Taichung and Magong, and also to Kinmen. 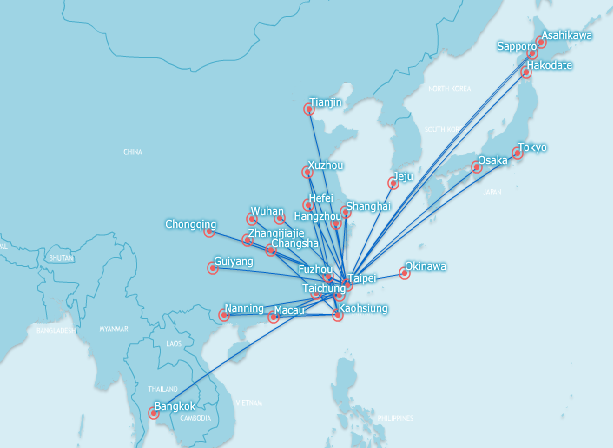 Still, it has managed to do well, maintaining profitability for the last five years. The airline posted an operating profit of NT$292.3 million for the first nine months of 2014, compared to a N$82.6 million loss in the previous year. Its net profit for the nine months also grew to NT$306.6 million.

The airline’s safety history is less impressive, with flight GE235 being its seventh significant safety incident since 1995, coming just six months after the crash of an ATR 72-500 that killed 48 onboard. The 4 February crash also makes it the carrier’s fifth hull loss in the last twenty years, a period in which it has lost four ATRs and one A321.

TransAsia, however, is tenacious, and launched low-cost unit V Air just last December. The budget carrier operates a 2014-built A321 on services from Taipei to Bangkok and Chiang Mai. The plan is to grow to a fleet of five by the end of the year, focusing on services to Northeast and Southeast Asia within a four hour flying radius from Taiwan.

Investigations into last July's Magong crash and Tuesday's Taipei crash are underway, but TransAsia will probably come under increasing scrutiny by Taiwan’s Civil Aeronautics Administration, possibly with particular attention put on its maintenance and safety culture. This could impact the airline's growth in a market where domestic operations have already been hit by high speed rail. More important, it could prevent TransAsia from gaining more lucrative business from the booming mainland China market.

In recent years TransAsia has worked hard to attract passengers from the mainland, often offering aggressive discounts over its competitors. It now flies to 12 points in China. There were two groups of Chinese tourists on GE235.

Already, Taiwan president Ma Ying-jeou has pushed for the aviation regulator to look deep into the accident, “punish” those at fault, and strengthen the country’s flight safety. TransAsia will unlikely escape from this incident unscathed.

Besides dealing with possible regulatory backlash, it also has the tedious task of rebuilding its reputation and regaining public trust. The image of the turboprop with its left wing nearly perpendicular to the highway will take a long time to erase.