In 2014, the Royal Air Force’s chief of air staff, ACM Andrew Pulford, said that “without any doubt” more of the UK forces' training had to be simulated, moving away from a reliance on live flying.

Pulford intends the balance to be close to 50/50. But to take the UK’s Joint Helicopter Command (JHC) as an example, it currently uses aircraft for 80% of its training.

However, under JHC type conversion training for three rotorcraft types provided under the Medium Support Helicopter Aircrew Training Facility (MSHATF) operated by CAE at RAF Benson, between 45% and 70% of training is simulator-based.

The company and the service are in the process of assessing the training provision, which has highlighted the lack of a rear crew trainer for the utility types.

Andrew Naismith, managing director of aircrew training services at MSHATF, told journalists at RAF Benson on 16 May, CAE hopes to use its experience in providing a rear crew trainer for the Royal Canadian Air Force’s Lockheed Martin CC-130 fixed-wing transport, to enhance rotorcraft training at Benson.

“One of the difficulties we have here is that while it’s a fantastic facility for the front crews – pilots and navigators – for the rear crew capability this is omitted,” Naismith says.

“This is something that we’re looking to address. What we’re trying to do is move from synthetic training augmenting live training; with 50/50 we are going to start replacing live flying, so we need to make the experience more realistic.”

Another key area that needs developing is the ability to carry out full mission training, which has only been conducted at a basic level so far.

“The mission planning is something that has always been here as a capability, in truth, [but the UK forces] haven’t used it as extensively as perhaps [they] might have done, and we are trying to change that culture,” Naismith notes. “We are in the process of updating our database and visuals here, and that capability will allow us to do specific mission rehearsal at relatively short notice.

“There has been a demand for it arguably for quite some time… and at Benson there is a capability here that we haven’t tapped in to.”

CAE is in the process of upgrading the six simulators – three Chinook, two Merlin and one Puma – to the Medallion 6000 visuals standard, and is introducing a common database that allows simulators to be linked and quickly upgraded to meet the required mission scenario.

Additionally, CAE is looking at adding another Puma simulator, although Naismith says it is unlikely this will be a full flight facility. 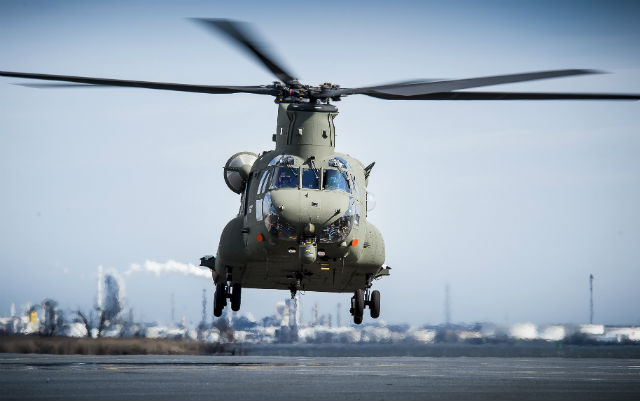 With the RAF's Merlin HC3 fleet moving to Royal Navy operations as part of the Commando Helicopter Force – based at RNAS Yeovilton in Somerset – some training will be provided by other companies, but it is expected the output for MSHATF will continue as it is now.

“It will be augmented by those other facilities; within the next few weeks 845 Sqn will move down to Yeovilton and Merlin will no longer operate from Benson,” Naismith notes. “The aim will be that there will be some commonality with the facilities at Yeovilton, and the ability to link.”

At RAF Odiham in Hampshire, Lockheed Martin will provide training for the new Chinook HC6 variant, although CAE says there will also be a similar capability at MSHATF.

Regarding the percentage of hours carried out for operational conversion on the three MSHATF helicopters, Merlin and Puma see 70% of training carried out virtually, while Chinook has approximately 45%.

Third-party operators are permitted to use the facilities, the most significant of which is the Netherlands for its Chinooks, and Canada and Denmark with their AW101s. Some 9,000h are flown by UK forces each year and an extra 2,000h are performed by other nations.

It is also the aim for the UK facility to be linked with simulators at the Bückeburg army aviation school in Germany for a joint exercise by the end of the year, which will be facilitated by the introduction of the common database.