Widebody aircraft flew domestically for United Airlines for years, with Boeing 777-200s frequently plying the skies between its hubs in the noughties and McDonnell Douglas DC-10s in prior decades.

Chicago-based United operated a quarter of its flights between its Chicago O’Hare, Denver, Los Angeles, San Francisco and Washington Dulles hubs with widebody aircraft – Boeing 747-400s, Boeing 767-300ERs and 777-200s – in May 2010, the month that it announced its plans to merge with Continental, Innovata FlightMaps Analytics data shows. 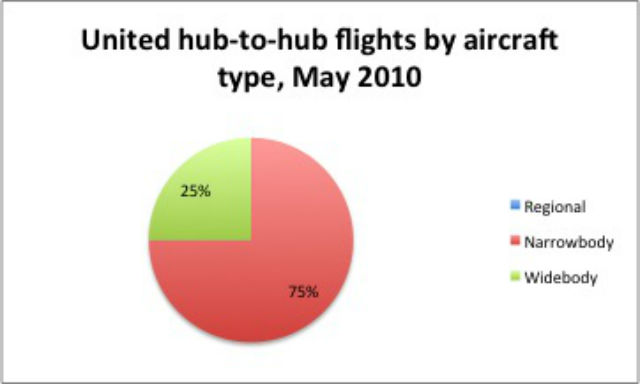 This May, the airline will operate just 1% of flights between the same markets with widebodies, Innovata shows. 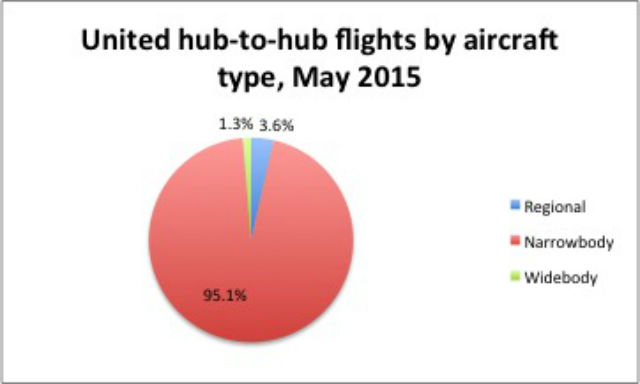 That will change soon.

Chicago-based United announced today that it will refurbish and shift 10 777-200s from international to domestic operations in the coming years. The move will allow the airline to consolidate frequencies between hubs and to provide additional lift to Hawaii, says chief revenue officer Jim Compton during an earnings call.

“This is a seat neutral change that we’re doing here,” he says. “This will allow us to consolidate frequencies and fly a widebody in [the] market.”

For example, United has three peak period departures on narrowbody aircraft in a 90min window from San Francisco to Chicago O’Hare, says Compton. These could easily be reduced to one departure on a widebody with little or no change in capacity.

United executives decline to comment on the timeline for the domestic 777s, except to say: “It won’t be this year.”

Domestic widebodies are just the tip of the fleet changes that United has in the works. The carrier also announced today that it has converted 10 Boeing 787 orders to the 777-300ER and will refurbish another 11 767-300ERs for a total of 21 aircraft.

“These fleet changes allow us to reduce our alliance on 50-seat RJs [regional jets] from about 8% at the beginning of last year to about 4% at the end of next year,” says John Rainey, chief financial officer of United, during the call.

The regional jet reductions are possible by shifting the 10 777-200s and some transatlantic 757-200s to domestic operations, as well as the addition of 10 to 20 leased used narrowbodies, he says.

The new 777-300ERs will “integrate seamlessly” with United’s fleet of 74 777-200s, says Rainey. The aircraft will be used in “high demand” markets, for example out of its slot and space constrained Newark Liberty International airport hub, he adds.

Boeing’s website shows the 777-300ER seating 386 passengers in a standard three-class configuration compared to the up to 269 passengers on United’s 777-200s.

Deliveries will begin in 2016, the airline says.

“There’s nothing to read into this about the 787,” says Rainey in response to questions over why the decision to convert 787 orders. The 777-300ER simply fits better in certain markets than either the Dreamliner or other widebodies in United’s fleet, he says.

The carrier has 38 firm orders for both the 787-9 and -10 following the conversion, the Ascend Fleets database shows. It declines to comment on orders for which variant it converted to the 777.

The 777-300ERs will not immediately replace the comparably sized 747-400s in United’s fleet, says Rainey. The airline will continue to operate the venerable Boeing widebody for “a few more years” until the fleet faces its next round of significant maintenance events in 2020.

The carrier will have 21 747s at the end of this year, its latest fleet plan shows. This includes the previously announced removal of two aircraft.

United will refurbish 21 767-300ERs, 11 more than previously disclosed, with interior modifications and operational improvements, says Rainey. These aircraft will allow it to shift the 777-200s and some transatlantic 757s to domestic and near Latin America operations.

Earlier this month, the carrier disclosed plans to shift its flights between Newark to Barcelona, Berlin, Hamburg and Madrid to 767s from 757s on a year-round basis from October. More of these gauge changes are likely as the 767 modifications are completed.

Though United management did not cite oil prices in its discussion of the fleet changes today, fuel expenses likely played a role in the decision to retain older 767s and buy current generation 777s. Analysts have speculated that the carrier could see a $900 million net gain from lower fuel prices this year.

However, Compton’s comments that the changes will be “seat neutral” suggests that the carrier does plan some not yet announced 747, 767 or 777 retirements.

United continues to hunt for additional domestic narrowbody aircraft. The first of two Boeing 737-700s that it has purchased from Copa Airlines is already undergoing modifications and Rainey says that it is near lease deals for 10 to 20 additional used narrowbodies.

Deliveries of the leased aircraft would occur over the “next few years” if a deal is reached, he says.

The transatlantic 757-200s will complement these additional narrowbodies. United is likely to use the 757s to airports where its rapidly growing fleet of 737-900ERs face performance issues, for example to hot and high airfields and on longer transcontinental flights out of Boston.

The additional domestic narrowbodies are necessary for United to take all of the 76-seat regional jets that it has on order. The carrier’s pilots contract limits it to 255 regional aircraft with 70 to 76 seats but its fleet plan anticipates 268 such aircraft by 2017 if there are retirements of older Bombardier CRJ700s or Embraer 170s beyond the 15 CRJ700s scheduled to leave the fleet this year.

However, United can add one additional 76-seat regional jet up to 325 aircraft for every 1.25 “new small narrowbody aircraft” - defined as the Bombardier CS100, Embraer 190 or Embraer 195 - that it adds to its mainline fleet, the contract states.

If the 10 to 20 used narrowbodies that it is near deals for are either of these three aircraft types, United could add up 16 76-seaters to its regional fleet above the 255 aircraft cap.

Removing additional CRJ700s and E170s would also allow it to increase the number of 76-seat aircraft, for example exercising its 35 remaining options for the Embraer 175.

Despite all of the fleet changes, Rainey says gross capital expenditures remain unchanged at $2.7 billion to $2.9 billion annually for the next three to four years.