A US Air Force drive to end its reliance on Russian rocket motors is turning into a high-stakes competition between rival technologies, with propulsion specialist ATK throwing its hat into the ring just a week after United Launch Alliance and Blue Origin agreed to jointly fund development of a new, all-American engine.

ATK’s 23 September response to a request for information published by the USAF on 20 August proposes to replace the Russian-built RD-180, which powers ULA’s Atlas V rocket, with solid-fuel engines. And, the company says its Utah design and test facilities can have its concept developed, tested and delivered within three years.

The ULA-Blue Origin proposal is to finish development of Blue Origin’s BE4, a more conventional liquid fuel design running on cryogenic oxygen and natural gas. ULA, the Boeing-Lockheed Martin joint venture behind the Atlas and Delta launcher families and sole-source supplier for the USAF’s Evolved Expendable Launch Vehicle contract, and Blue Origin, a start-up created by Amazon.com founder Jeff Bezos, say they can achieve first flight in 2019.

Either approach would result in a new launch system, rather than a mere plug-in alternative to the RD-180, exports of which have been banned by Russia as a response to Western economic sanctions imposed over its role in the war in Ukraine. ULA has a two-year stockpile of RD-180s and its Delta IV alternative is made of US-built components, but the Ukraine crisis – and the 2013 US National Space Transportation Policy – is driving the Air Force to explore alternatives. 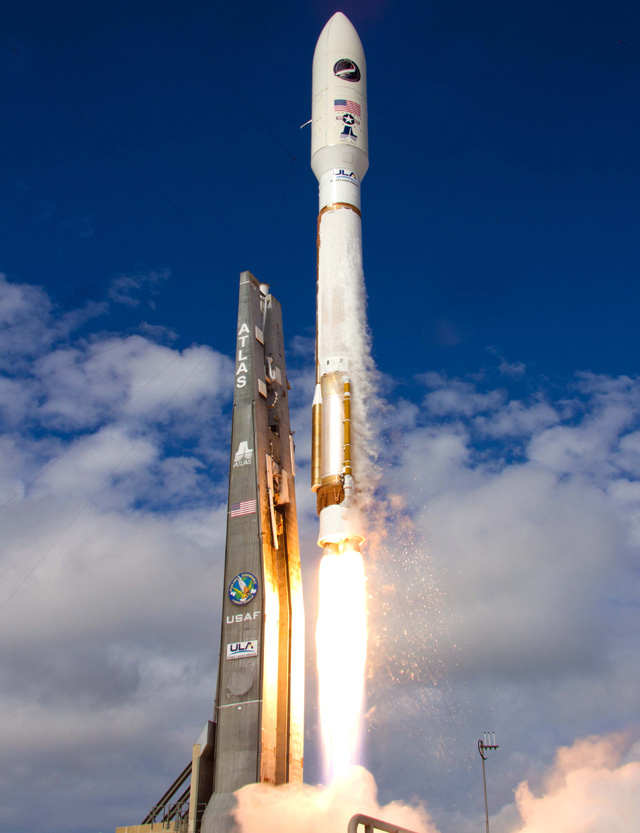 The USAF is also looking “to get the best value for the taxpayer” from what it calls “commercially viable” sources “exploiting any available synergies with commercial space launch systems”. That formula would appear to be tailor-made for SpaceX, the start-up whose Falcon 9 rockets are contracted by NASA to resupply the International Space Station and whose low prices have shaken up the launch market. So far, SpaceX is declining to comment on whether or not it will respond to this RFI, but in April it very publicly declared its interest in competing for EELV launches by filing suit in the US Federal court to challenge the exclusivity of the USAF-ULA contract.

The cost equation is critical. In Congressional testimony given earlier this year by SpaceX chief Elon Musk in support of his call to be allowed to compete for EELV launches, the cost to the USAF of a national security launch in 2013 was put at $380 million – the highest in the world and on top of a $1 billion annual subsidy of ULA’s fixed costs. A Falcon 9 flight, said Musk, costs “well under $100 million”.

The other big player in the US rocket industry, Aerojet Rocketdyne, is also yet to respond – although its engines have played a role in every key US space programme, most visibly supplying the Saturn V Moon rockets and the Space Shuttle main engine, as well as the in-development human-rated Space Launch System.

The technology battle over what looks set to be the US’s next-generation launcher could mirror the European Space Agency’s decision to replace its reliable, liquid-fuelled Ariane 5 with an all-solid main stages Ariane 6 from about 2020. According to ATK vice-president strategy Kent Rominger, while “big solids” weren’t yet available in the days of the Saturn V, today, their reliability, high thrust and minimal ground infrastructure requirement make them ideal for main stages and strap-on boosters. US ballistic missiles, he notes, use this very high-performance configuration because their nuclear warheads can withstand such launch forces, but modern solid technology can be gentle enough even for delicate satellites.

Like Ariane 5, Ariane 6 will be Europe’s solution for everything from communications satellites – where it is launch market leader – to large scientific payloads. ESA’s Ariane 6 decision was sparked by SpaceX, whose Falcon 9 launch cost is about half the €150m-200m ($192m-256m) cost of an Ariane 5 flight. By going to solid main stages – which can be made in advance, stored and assembled as required – and developing a new, restartable upper stage for precision payload placement based on tried-and-tested liquid fuel technology – ESA and its launch operator, Arianespace, believe they can get launch costs down to €70m.

At that cost level, which Rominger regards as realistic, even SpaceX would have a run for its money.