Virgin Atlantic's decision to scrap four international routes and focus on strengthening its transatlantic services marks the latest chapter in a battle for dominance in this key market – one in which the UK carrier and partner Delta Air Lines is joined by British Airways/American Airlines and United Airlines among the heavyweight contestants.

Routes to Cape Town, Mumbai, Tokyo and Vancouver are being withdrawn by Virgin, and in their place come services between London Heathrow and Atlanta, Los Angeles and San Francisco. The carrier will also take over Delta's summer seasonal Heathrow-Detroit service and start an additional daily service to Miami during the winter season.

Following a transfer of operations with Delta, Virgin will fly a daily service between Manchester and Atlanta, while Delta will take over one of the UK carrier's existing Heathrow-Newark services. Finally, Delta will start a daily Manchester-New York JFK service in 2015. Virgin needs regulatory approval to operate the additional services to Miami and Atlanta, and expects these to be given by regulators by year-end.

Each move appears to be designed to strengthen the two carriers' presence in markets where they are already very strong.

Flightglobal's Innovata schedules show that in September 2014 there are only two players in the London-Atlanta market: Delta, with 74.3% of seat capacity; and BA, with 25.7%. On the London-Detroit route, Delta is the only player.

Often described as the most lucrative business route in the world, the London-New York market is also a major battleground for the big three rivals. Virgin and Delta hold a combined 31.9% seat capacity share – making them the second largest player. BA has a dominant 43% share but a new Virgin daily frequency will narrow the gap. 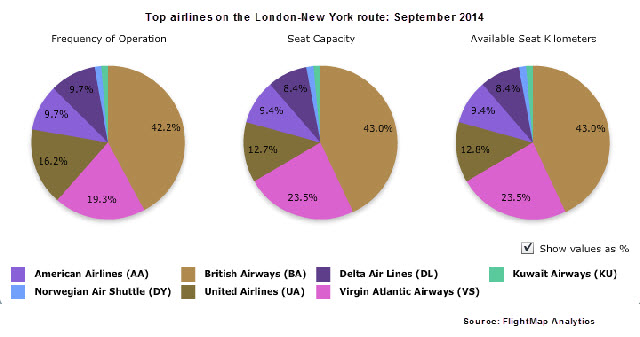 Delta's decision to operate services between Manchester and New York JFK opens a new front in the struggle, as up until now the market has been divided between United, American and Pakistan International Airlines.

The decision may have as much to do with Manchester not being slot-constrained – unlike Heathrow – as it has with market demand and lower airport charges.

London-San Francisco is another key battleground, with BA holding just under 39.8% seat-capacity share, followed by United with 34.1% and Virgin with 26.1%. Virgin's decision to operate five times a week there in the summer will have an impact.

These areas of strength can be contrasted with Virgin's relative market weakness on the routes it is abandoning. On the London-Vancouver route, for example, BA dominates, while Virgin is a weak fourth by capacity share, with 13.1% of seats. On the London-Mumbai route, Virgin is the third player, with 16.1% market share. 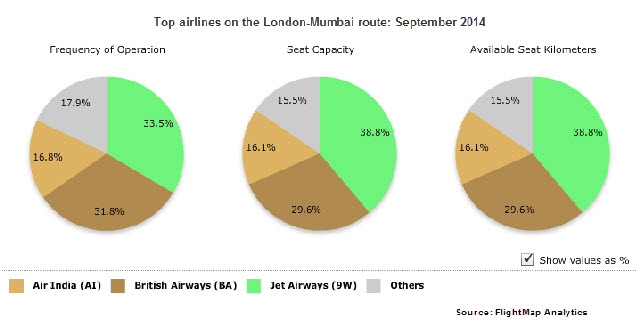 Virgin freely admits that these network changes are partly the result of the constraints it faces at its main UK base – Heathrow – and has stated that if in the future "Heathrow gains its long overdue expansion, Virgin Atlantic would love to re-enter Tokyo, Cape Town, Mumbai and Vancouver".

Kreeger remains committed to the need for a single hub airport: "I believe that what London needs is a true hub to offer the kind of destinations that would not be offered in a split option."

With the Thames Estuary option having now been dropped from the Airports Commission's shortlist, Kreeger reiterates his support for the expansion of Heathrow over London Gatwick, stating that this is the only way Virgin would be able to expand into one market without sacrificing another, as it has been forced to do in its latest network reshuffle.

"We have managed to add a lot, but Heathow will continue to be constrained and that will limit the growth opportunities," he adds.

Interestingly, while Delta and Virgin continue to strengthen their transatlantic links, Kreeger emphasises high-quality customer service as being equally important as market share, if not more important, to succeed in this highly competitive market.

Despite the limitations of Heathrow, he points to various initiatives pursued to improve services, including Little Red's feeder services and Delta's move to Terminal 3 to join Virgin, allowing its passengers to take advantage of the UK airline's "Clubhouse" lounge. Other key changes include a £300 million ($490 million) investment equipping the Virgin fleet with wi-fi and the building of a new Clubhouse at Los Angeles.