Press speculation continues to surround the future of Virgin Atlantic’s Little Red, but if the UK carrier is looking to scrap its domestic operation it could prove difficult to find an alternative use for the slots.

Ever since then Virgin Atlantic’s new chief executive Craig Kreeger has been forced to regularly defend the performance of Little Red against criticism that it is nothing but a loss leader for the UK airline.

Asked if it is currently reviewing the existence of Little Red, Virgin says: “We look at Little Red through the same lens as the rest of the business – it must deliver on performance, potential or strategic contribution.

“Little Red is still in its growth phase, so it is too early to comment on these criteria. However, we have seen good growth in passenger traffic and load factors on all the Little Red routes this year.”

Virgin does not go into detail about how it calculates the performance of Little Red, but Little Red average load factors make pretty troubling reading. UK CAA statistics show that in May 2014 Little Red flights were on average 43% full, far below the 81.1% enjoyed by EasyJet or the 74% of British Airways’ mainline fleet.

Peter Morris, chief economist with Flightglobal consultancy Ascend, says that by any normal business parameters Little Red is neither performing strongly nor ever had a realistic chance of doing so.

“Right from the start I could not see how given the inherent poor economics of short distance domestic flying, the limited scale of the operation and the intense competition from low-cost carriers at other London airports that Little Red could be a success,” he says.

“In addition factors like the inconvenience of transferring terminals at London Heathrow would also inhibit the attraction for any transfer passengers to and from Virgins mainline services. So my feeling was that it was a matter of time before Little Red ran up some big red.”

Operationally it would not be too difficult for Virgin to unwind Little Red. Its fleet of four A320s are wet-leased from Aer Lingus under a three-year contract until 2016.

The Irish carrier will not divulge details of the agreement but it is reasonable to assume that depending on the terms of the lease, Virgin could either pay a fee to return the aircraft early, park them and continue paying fees for the duration of the contract or attempt to sub-lease them to another carrier.

But from a regulatory point of view finding an alternative to Little Red could prove a headache because of the constraints attached to the slots it operates.

Unlike most slot pairs where the routings are at the owners discretion, two of the three slots used by Little Red are remedial slots released by IAG as part of its takeover of BMI and these come with specific constraints set by the European Commission.

Under the commitments, airlines using those remedial slots are restricted to operating from London to Aberdeen, Edinburgh, Nice, Cairo, Moscow or Riyadh.

Given Virgin is a long-haul carrier focused primarily on its transAtlantic business in partnership with equity partner Delta Air Lines, slots that are restricted to European destinations only could be expected to be of little value to them. Only flights to Moscow could foreseeably be of interest to Virgin, but even this option is closed to them after they lost out to EasyJet in a failed bid to secure BMI's traffic rights to Russia in 2012.

It should be noted that after six consecutive IATA seasons these constraints are relaxed to allow the slots to be used for routes to anywhere in Europe. Virgin could deploy Little Red on European short-haul flights but unless there is a compelling evidence of strong feeder case its hard to see how this would be better than the current set up.

It should be further noted that under the terms of the release, the slots will be returned to IAG if they are not used by another operator. Perhaps given BA's dominance at Heathrow with more than 43% share of seat capacity, Virgin is simply seeking to deprive the slots from their UK rival. 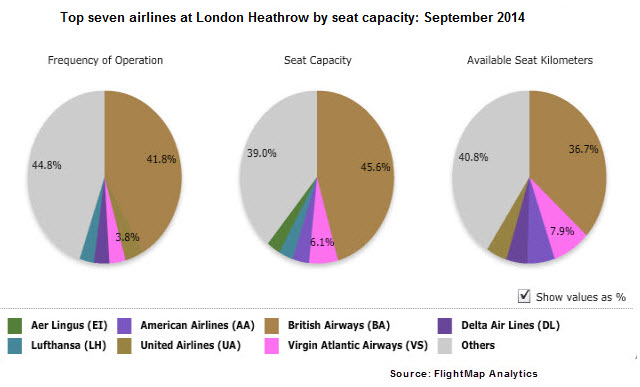 Whatever the criteria and commercial considerations maybe, it seems that there is no easy alternatives for Virgin to replace Little Red.