ANALYSIS: What IAG-Aer Lingus would mean for UK-Ireland market

When IAG chief executive Willie Walsh discussed the reasons why the airline group became interested in acquiring Aer Lingus, on a conference call in May, he emphasised the Irish carrier's "strong presence" links to the UK regions.

An analysis of the schedules in the market underscores Walsh's point. Flightglobal's Innovata schedules show that Aer Lingus operates 37 routes between Ireland and the UK, connecting 13 UK cities including London with five points in Ireland.

However, Aer Lingus remains the second-largest operator on routes between Ireland and the UK behind Ryanair, with the Irish low-cost giant accounting for a 48.2% share of the market, in comparison with Aer Lingus's 38.3%.

Even combining British Airways' and Aer Lingus's services together, the two carriers only muster a 45.5% market share. 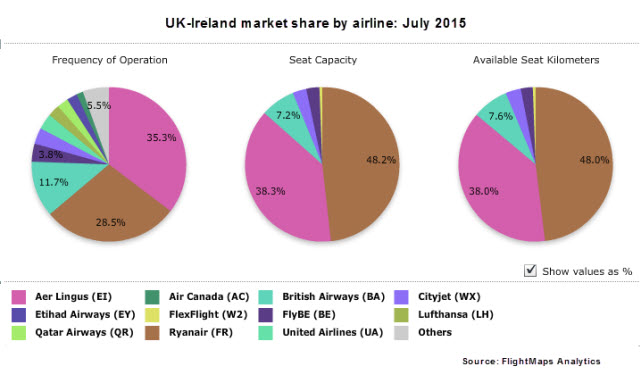 However, after a tie-up with IAG, the market would likely not remain static for long, as both Aer Lingus and Ryanair have been signalling their intention to step up services on key routes and markets.

Aer Lingus fired the starting gun in May when it disclosed plans to start flights between Liverpool and Dublin from this winter – a move Aer Lingus chief commercial officer Mike Rutter describes as "historically significant between the two businesses", referring to Ryanair, currently the sole operator on the route.

On a conference call on 29 July, Rutter was bullish about the opportunities the IAG-tie up offered for Aer Lingus to expand its UK short-haul operations.

Having successfully reduced its short-haul costs in the first half of the year – and with oil prices and currency fluctuations expected to be in its favour in the second half of the year – the Irish flag carrier is ready to go into growth mode again, Rutter says, with an extra 3% of short-haul capacity planned in the third quarter and more than 5% in the fourth quarter.

"We spent the first part of this year transitioning our business so we'd be in a good position to both develop the short-haul business and be able to compete with anything our principal competitor in Ireland may choose to add into the mix," Rutter says. "Obviously, Aer Lingus has a very strong history of being the most successful airline in Europe in competing with Ryanair on short-haul routes, and we expect to be able to continue to do that."

He adds: "The key tactics we deploy in that are increased competitiveness, both in price and in terms of the new product sets." Here, he is referencing a new premium product for selected short-haul routes, intended to offer "the time-sensitive passenger" priority services and more space.

The commercial chief also notes a general improvement in the economic outlook in both the UK and Ireland and "therefore the benefits of economic recovery which are flowing through the passenger numbers".

This trend is borne out by Innovata schedules data, which shows that seat capacity between the UK and Ireland fell from 17.8 million in 2008 to 13.5 million in 2011, before beginning a steady recovery to over 15 million seats by the end of 2015. 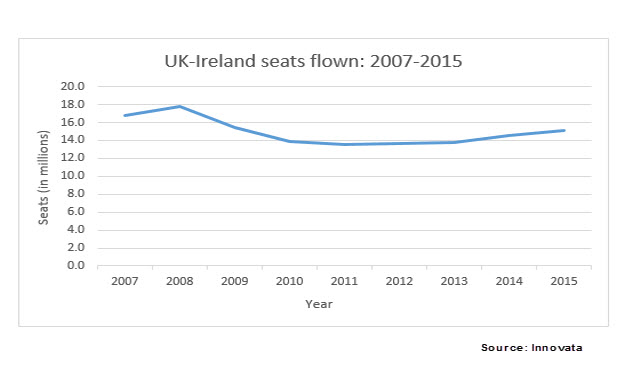 Rutter also says there are signs that a period of "softer" pricing in London is ending and believes that the IAG tie-up would only aid the carrier's efforts to pick up more transfer passengers from the UK to feed onto its long-haul routes thanks to the opportunities for codeshares and possible involvement in its North Atlantic joint venture with its Oneworld partners.

"Aer Lingus already has strong feeder services to/from the UK regions. Its existing strategy would be likely to see these increase gradually over time," says Gerald Khoo, a transport analyst with brokerage firm Liberum. "The IAG acquisition would be likely to accelerate this."

Khoo expects Dublin to act as an "alternative hub for North Atlantic connections, especially for passengers originating in the UK regions", which he expects will probably lead to a growth of both short-haul and long-haul connections.

"At the margin, this may see some connecting traffic switch from Heathrow to Dublin, potentially freeing a handful of Heathrow slots for alternative use, most likely [for] long-haul [services]," he adds.

Having returned to growing the Irish market since 2014 after the country abolished its its €3 travel tax, Irish low-cost carrier Ryanair seems intent on further expanding its routes between Ireland and the UK.

Flightglobal's Innovata schedules show that Ryanair is the biggest operator on routes from London to Ireland and on routes from Dublin to the UK. It is the only operator on services between the UK and Kerry. Chief executive Michael O'Leary has lately been quoted as saying he was planning "very aggressive pricing" over the winter.

Sorahan says three of the five slots are restricted to Dublin and Belfast operations, but that the other two are open for use on other European destinations. He expects the budget carrier to have "no difficulty in filling these slots".

Ryanair already has a small operation from Gatwick, serving three Irish destinations – Dublin, Shannon and Cork – but this could represent a new period of growth for the Irish carrier away from its base at London Stansted.

Khoo believes Ryanair might not be alone in having an interest in using the slots.

"Unlike the BMI remedy slots at Heathrow, I expect the Gatwick slots to be in demand, and to be used sustainably (ie, unlike Little Red)," he says, referencing Virgin Atlantic's ill-fated domestic operation. "Ryanair and EasyJet are the obvious candidates to take them on, and I can see Norwegian having a go too. It will be interesting to see how these slots are allocated, given the restrictions on their use for the first few years."

What will mark out the strategies of Aer Lingus and Ryanair in their UK-Ireland expansion strategies could be the Irish flag carrier's emphasis on adding points and capacity in order to feed its Dublin hub and to enhance its relationship with British Airways on transatlantic routes, in contrast with Ryanair's model, which remains focused on point-to-point traffic.

Given what has happened in the past on routes where these two models clash, fierce competition looks a certainty.