ANALYSIS: What will a Delta-Aeromexico joint venture offer?

A planned joint venture between Delta Air Lines and Aeromexico will create a competitor on US-Mexico routes that can challenge the dominance of United Airlines and American Airlines, say Delta and Aeromexico.

The two SkyTeam Alliance carriers sought anti-trust immunity from the US Department of Transportation yesterday for a metal neutral joint venture on US-Mexico routes. Such a joint venture will involve the two carriers building up Delta's hub at Los Angeles to serve US west coast-Mexico markets.

Delta and Aeromexico say they are "ready to move quickly" to implement the joint venture within 30 days after they receive regulatory approvals, and could launch the first joint network plan within 90 days.

Outlining the need for the joint venture, the two airlines say American and United are the largest airlines on US-Mexico routes with 25% and 22% market share respectively. Aeromexico and Delta rank in third and fourth place with a 14% share and 11% share respectively. A joint venture between Aeromexico and Delta will result in a "third network competitor of roughly equal size to American and United".

"Neither Delta nor Aeromexico individually has the ability to offer a single carrier network of comparable scope and scale to compete with United and American," the two carriers say in their filing with the DOT.

"Among the three major US network carriers, Delta is the only carrier without a Texas hub. Consequently, unlike American and United, Delta does not have the ability to efficiently reach important and rapidly growing secondary cities in Mexico with short-range, smaller-gauge equipment."

United has a hub at Houston Intercontinental and American is based at Dallas/Fort Worth International.

A joint venture will allow Delta and Aeromexico to tap into each other's networks, they point out. Delta will be able to gain access to Aeromexico's hubs at Mexico City, Monterrey and Guadalajara and the domestic points that Aeromexico serves from the three airports "which are impractical for Delta to serve on its own".

In the USA, Delta and Aeromexico will work together to develop Los Angeles into a hub "covering the top 10 West Coast-Mexico markets". "In addition to launching new routes, frequency and gauge on existing routes will be expanded," they say.

The carriers estimate that Los Angeles has an ethnic Mexican population of five million - the largest of any city after Mexico City.

Delta has been growing at Los Angeles, adding 29 new destinations and 83 frequencies during the past five years, it says. The airline is in the midst of challenging American Airlines' plan to begin Los Angeles-Mexico City service this June by taking over Alaska Airlines' authority on the route. Delta has said that it will offer "superior" service on the route by operating an incremental daily flight above what American had proposed.

Boosting the Los Angeles hub will also help Delta be more efficient with its route scheduling. It cites an example: A flight arriving from the US east coast would typically stay on the ground at Los Angeles until the following day as it is too late to turn the flight back and arrive on the US east coast in the middle of the night. "Such an aircraft is well situated and well timed to provide evening southbound service into Mexico, returning the following morning, and resuming a domestic schedule."

Aside from Los Angeles, Delta and Aeromexico say a joint venture will allow them to increase service between Mexico City and New York John F Kennedy. US nonstop service to smaller Mexican cities will also go up. "It is not practical for Delta to serve these markets nonstop from its US hubs. However, Aeromexico serves virtually every city in Mexico from one or more of its three hubs at Mexico City, Monterrey or Guadalajara."

Quantifying the network benefits, Delta says it forecasts up to 14 new routes and up to 39 additional daily departures that will be created over the next five years as a result of the joint venture.

These potential new markets include nonstop service to Mexico City from Seattle, Phoenix and Austin among others, as well as service to Monterrey from Chicago O'Hare and Dallas/Fort Worth, a route map by Delta and Aeromexico show. 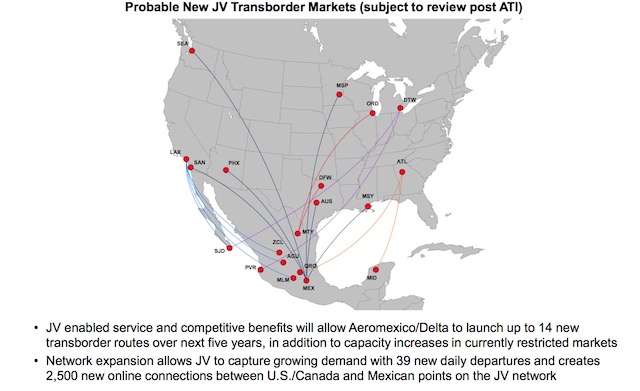 Besides adding new markets, Delta and Aeromexico say they plan to upgauge aircraft on existing US-Mexico routes. "Not only will capacity increase across the transborder network, but important efficiency gains will be realised."

Delta and Aeromexico currently overlap on only two transborder city pairs: New York-Mexico City and Los Angeles-Guadalajara. The two airlines cite this minimal overlap as support for why authorities should approve their request for anti-trust immunity, pointing out that such immunity had been granted to other airline alliances which had more overlapping routes.

The two airlines' filing comes as the USA and Mexico work to ratify a liberalised air transport agreement, which is expected to lift existing limits on the number of airlines that can operate between each US-Mexico city pair. That agreement is expected to enter into force on 1 January 2016.

Delta and Aeromexico have shared a close relationship even while they were formalising joint venture plans. They are codeshare partners, have a MRO joint venture and Delta and its pension trust hold a combined 9% stake in Aeromexico.