ANALYSIS: Why SR Technics is partnering with AerFin for A340 MRO

It has been launched for the widebody type as many of the aircraft near the end of their service life. However, AerFin managing director Bob James tells Flightglobal that the partnership is evaluating a programme extension to other types, including the A320 family.

The venture will have access to material from disassembled aircraft. Earlier this year, AerFin arranged the acquisition of Cathay Pacific's remaining A340-300 fleet. Two of the 11 aircraft in question have already arrived at the facility of French teardown specialist Tarmac Aerosave in Tarbes. The last aircraft is scheduled to be retired by 2017.

Cathay Pacific is utilising some of the aircraft's components for its A330s under the deal, but other material will be used as a spare-parts pool for the AerFin-SR Technics joint venture. The target is not to sell that material to third-party traders, but to use it in way that will keep the remaining fleet flying for as long as possible, says James.

He acknowledges that potential fuel price rises could shorten the service life of the four-engined long-haul type, but expects some of the remaining A340-200/300s to operate for around eight years. As manufacturers and lessors for the CFM International CFM56-5C-powered type have made guarantees on residual values – likely to be higher than current market values for the aircraft – they have an interest in keeping the equipment flying for long as possible, he argues.

Operators may favour low capital costs for used A340s versus new or more competitive second-hand equipment, James says. He asserts that there still is a niche for the A340 as a high-density aircraft – Lufthansa is reconfiguring its A340-300s with more seats – especially as the type is better suited to high-altitude airports than twinjets.

But he adds that the Zurich-based maintenance specialist will also conduct component repairs under the scheme.

Under the programme, customers can select maintenance services at fixed prices – such as hour-based agreements – or on a time-and-materials basis. Operators can sell and lease back aircraft and engines through the scheme or arrange deals whereby AerFin buys the equipment at a guaranteed price at the end of its service life.

Leinauer says the programme is "unique" in the A340-200/300 aftermarket and will "eliminate most of the risk" associated with operating aircraft nearing the end of their service life. Its development has been driven by the MRO provider's existing A340 maintenance customers, he adds.

The partnership is a joint venture between SR Technics and AerFin alone, but James says it could be extended to aircraft powered by engines not currently supported by SR Technics' overhaul shop.

For component repairs, he says, customers can opt to service equipment through providers of their choice. 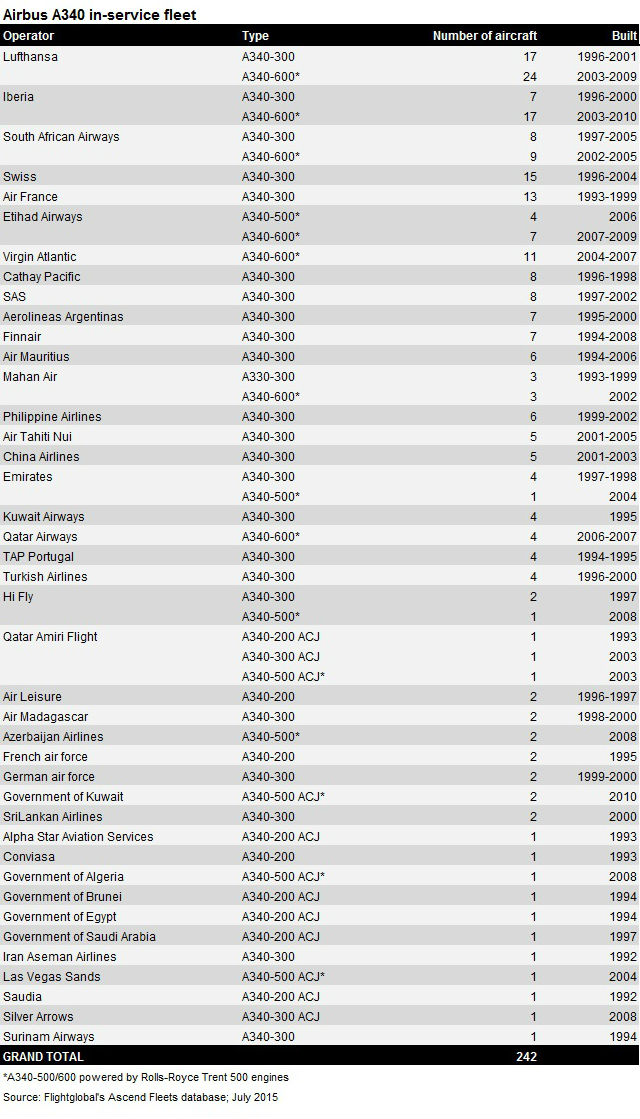