Japanese carrier Skymark Airlines’ unusual plan to have rivals Japan Airlines and All Nippon Airways both codeshare on some of its flights appears to be coming to fruition, but it still faces some major short-term challenges.

Skymark confirmed in a recent stock exchange statement that it is just working through quantity and price details with its two larger rivals, with a codeshare expected to be in place by 29 March.

ANA in particular has been happy to work with independent carriers, and already codeshares with Air Do and Solaseed Air. Nevertheless, in December ANA chief executive Osamu Shinobe told Flightglobal that he had doubts about Skymark’s plans to codeshare with both ANA and JAL.

In the case of Skymark, there are few routes where it does not already overlap with JAL and ANA. FlightMaps Analytics shows that, for both carriers, the only major area without any overlap are a handful of routes from Ibaraki, north of Tokyo. 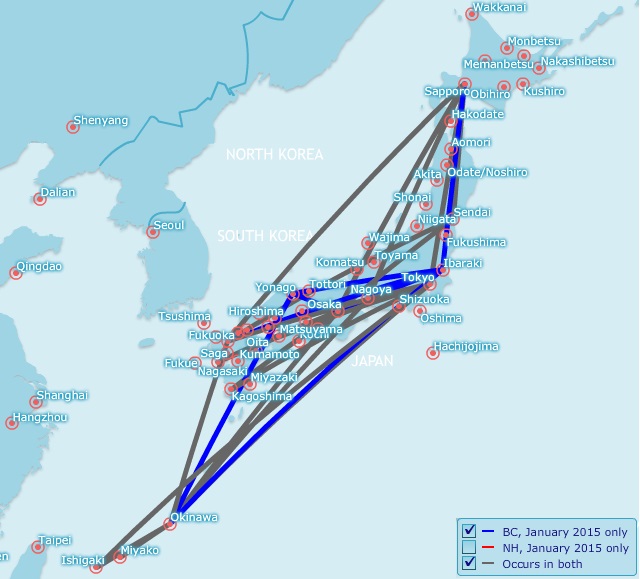 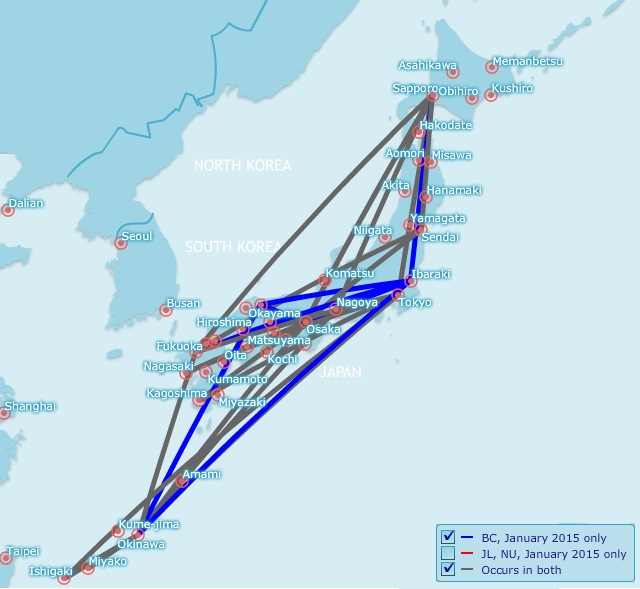 But rather than focusing on complementing markets, media reports indicate that ANA and JAL intend to codeshare on Skymark’s services from Tokyo Haneda to Sapporo, Kobe, Fukuoka, Kagoshima and Naha.

If that proves to be the case, it demonstrates that the core of Skymark’s value is in its operations at Haneda. The airport is a traditional fortress for JAL and ANA, but it has been breached by new low-cost carriers such as Jetstar Japan and Vanilla Air. With new slots hard to come by and keenly fought over, codesharing with Skymark allows both carriers to effectively add marginal capacity and frequencies on key routes for marginal outlay.

That could, in turn, open the way for Skymark to expand onto international routes. Fellow low-cost carriers Peach Aviation and Vanilla Air now derive large parts of their revenue from foreign passengers, providing foreign currency revenue that acts as a hedge against further devaluations of the yen.

Skymark’s fleet of 737-800s and Airbus A330-300s could allow it to access a range of medium-haul international routes, if it were able to secure traffic rights and slots to do so.

Indeed, it ordered its six Airbus A380s with the aim of starting flights from Tokyo to New York, but the change in economic conditions in Japan put the kybosh on those plans, putting Skmark on a collision course with the manufacturer. As such, international expansion is likely to be on the backburner for some time.

The more pressing issue for Skymark is its near-term financial situation. As of 30 September, its cash balance had fallen to Y4.55 billion ($38.6 million). It announced at the time that it would boost its cash position by executing sale and leaseback transactions on a number of engines and aircraft simulators. As its fleet is wholly leased, there are few other high-value assets that it could sell to raise cash.

Complementing that, the carrier also seems to be headed towards a new share issue. It had called an extraordinary general meeting for 18 February where it was expected that shareholders would vote on a new issue for as much as 25% of its capital. That meeting has since been postponed to an unspecified date.

The timing for a new share issue is certainly right. After hitting a low around Y155 per share in August last year, the airline’s share price has rebounded spectacularly, trading around Y300 per share at the start of the year.

Any gains from a new share issue, however, could quickly be erased by the penalties it owes Airbus over the termination of its A380 order last year.

Despite ongoing negotiations since October with Airbus about the penalties, at the end of 2014 the manufacturer lodged documents in a UK court to start legal action against the airline. Skymark has played down the significance of the legal action, and insists that the negotiations on the penalties are still taking place.

The airline has warned previously that high penalties would threaten its viability. No firm figures have been disclosed, but some reports place it at up to $700 million – a figure that would almost certainly send the airline into bankruptcy. On the other hand, other reports claim that Airbus may walk away with nothing additional to the pre-delivery payments already made on the aircraft.

Assuming that Skymark escapes hefty A380 penalties, locks in the codeshares with ANA and JAL by March, and taps new equity, it could end up in a comfortable position. But with major short-term challenges, it will be a tough few months for the carrier.