ANALYSIS: Will overcapacity in Southeast Asia continue in 2015?

Carriers in Southeast Asia have battled overcapacity this year, but as they dial back their growth plans, there is a good chance that the market should be better placed to meet demand, with a positive impact on yields.

Tigerair has taken the most drastic action. The Singapore based carrier is to sub-lease 12 Airbus A320s – around one-third of its fleet – to IndiGo for up to four years. While the airline is dealing with its own internal problems, such action indicates that it sees no return to growth in the near-term.

Competitor Jetstar Asia has not announced any plans to downsize its fleet, but it has made no secret of the fact that its growth plans remain on ice for the foreseeable future.

“Everyone’s stepped back and realised that the heady days of double-digit growth are done,” she says. “The growth of the middle class and the underlying health of the various economies in Southeast Asia will have a huge impact on how quickly we can grow going forward.”

In light of that new reality, Qantas has deferred the last of the planned A320ceo deliveries that were to go to the Jetstar group, and instead converted them to neo variants that are being delivered from 2016 onwards.

This year, even Lion Air has taken steps to reel back its capacity. CapStats data shows that in 2014 the carrier’s cumulative ASKs were down by 9.5%, year-on-year. It has also moved some aircraft outside of its operations via leasing arm Transportation Partners, which placed two Boeing 737-800s with start-up Chinese carrier 9 Air. Other narrowbody delivery positions have also been sold to other lessors.

Nevertheless, Lion still maintains a growing delivery skyline which is not set to slow down soon. Next year, the carrier will take delivery of 45 narrowbody aircraft, with deliveries peaking at 80 aircraft a year later. 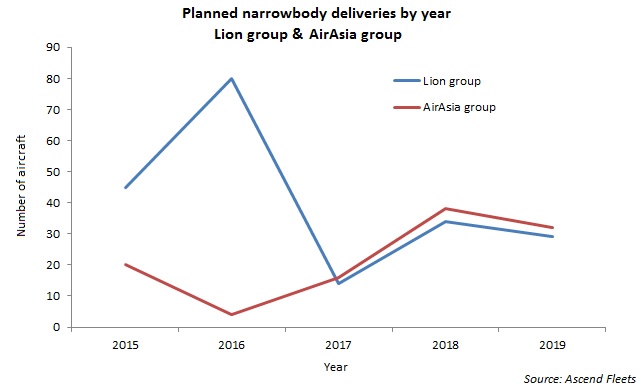 A large portion of Lion’s deliveries are likely to go to its full-service operation Batik Air, which is still in start-up mode and thus needs the additional aircraft to gain economies of scale. Although it has announced plans to head international, senior Lion group figures have recently indicated that it sees most of its potential within Indonesia.

Lion’s main sparring partner AirAsia is still slated to take 20 A320s next year, but it is likely that a large portion of those aircraft will go to AirAsia India as it pursues a rapid growth agenda. Before the end of this year, the airline was also planning to retire three older A320s.

There are some signs that the legacy carriers are dialling back their capacity plans too. Philippine Airlines’ new chief executive Jaime Bautista told Flightglobal recently that it could defer or sub-lease some of the narrowbody aircraft it has on order, and is reviewing its forward plans.

Further cutbacks could come from Malaysia Airlines as it gets down to work on its restructuring. Parent company Khanzanah Nasional has noted that the airline will restructure its network to become more “regionally focused.”

Curiously, the structural shift in capacity comes at a time when, in theory, there should be new markets opening up, with the Association of Southeast Asian Nations’ (ASEAN) open skies programme is scheduled to start on 1 January 2015.

Professor Alan Tan of the National University of Singapore tells Flightglobal that by the end of 2015 that all the capital cities in ASEAN will be opened up, but further progress towards European-style open skies could take longer. Indonesia and Laos have not yet agreed to open up their non-capital airports to open skies, which will limit future opportunities.

“The challenge is that the low hanging fruits have already been picked, and the next phase involving seventh freedoms and domestic flights will be extremely controversial for ASEAN states to give up,” Tan says. “These will have to be negotiated post 2015, and are needed to ensure full open skies or a true single market.”

Despite the new opportunity, Tan sees that there will be more consolidation ahead, favouring the larger carriers with strong home markets.

“There will be consolidation for sure, and some LCCs have already exited or will exit the market. But for the domestic markets that are still protected, the market leaders with scale like Lion Air in Indonesia and Cebu Pacific in the Philippines will continue to grow.”