ANALYSIS: Will United turn around in 2013?

United Airlines barely eked out a profit in 2012, while the majority of its US-based brethren posted impressive results.

This was not unexpected. The Chicago-based carrier fell short of its operational and revenue goals during both the second and third quarter, following an eventful move to a single passenger service system in March 2012. Jeff Smisek, chairman and chief executive of United, went so far as to apologise for these shortcomings during its second quarter earnings call in July.

"We are absolutely not satisfied with the financial results last year," he says during an earnings call on 24 January. "We need to generate better unit revenue and operate more efficiently, and we are taking actions to address both of those areas."

Operating revenue at United was nearly flat, increasing a measly 0.1% to $37.2 billion compared to 2011, while operating expenses increased 5.2% to $37.1 billion. Traffic fell 1% while capacity fell 1.5%. Passenger revenue per available seat mile (PRASM) rose 1.7% to 13.09 cents while cost per available seat mile (CASM) excluding fuel and special items was up 2.6% - nearly one percentage point more - to 8.98 cents

Not the best results for one of the world's largest airlines.

"The year 2012 was a very difficult one for the company, with the merger of two airlines and several computer glitches, resulting in a PRASM disparity to the industry," says Helane Becker, an airline analyst at investment bank Dahlman Rose, in a report. "United is focused on rebuilding its brand [this year], which took a major hit in 2012."

Executives outlined a number of initiatives that will allow the airline to improve its results this year. These range from cuts to its management headcount to rolling back some of the staffing actions that it took to restore operational reliability during the middle of last year, and continuing with its fleet redeployment and network optimisation.

United will trim management and administrative headcount by 6%, or about 600 employees, from this February, says John Rainey, chief financial officer of United, during the call. This could help the airline slow the growth of its CASM excluding fuel and special items, as it has at other carriers.

Smisek says that the carrier began the cuts in December with a 7% reduction in the number of officers.

Measures used to improve reliability following a spike in delays during the third quarter of 2012 will be rolled back this year. These included increasing the number of staff at airports as well as the number of spare aircraft it keeps at its hubs - especially in its legacy United operation - and small increases to aircraft block and ground time, says Jim Compton, chief revenue officer of United, during the call. 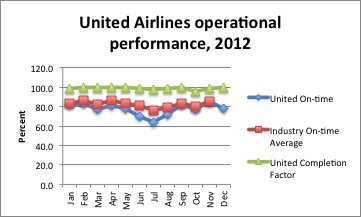 United and US Department of Transportation

The moves were needed to improve reliability during the second half of 2012 but, as Rainey puts it, the actions came with additional costs but little revenue.

"We have attacked some of our operational problems with, call it a blunt instrument, and we've thrown head count at it," he says. "We can be a lot more efficient. We can better deploy technology and, I think, over time we can actually see significant savings in other areas of the expense side."

Rolling back these moves is necessary and could achieve a lot of operational and revenue efficiencies that airlines, such as Delta that completed its merger with Northwest Airlines in 2008, are benefitting from. However, United must move with caution as it cannot afford to repeat its operational issues.

United lost corporate customer market share due to the issues, which will take time to regain. In contrast, Delta and US Airways each highlighted gains in corporate revenue during 2012 during their respective earning calls.

Fleet redeployment and optimisation remains a big potential revenue generating opportunity for United. The airline has already done a lot - it is concentrating its Boeing 747-400 fleet at San Francisco to reduce maintenance costs and has opened crew bases for the Boeing 737 in Chicago, Denver and Los Angeles, and the Airbus A320 family in Houston. Compton says that it will further redeploy its 169 large regional aircraft fleet around its hubs this year as a result of the new joint pilots agreement that was ratified in December.

United achieved less fleet optimisation than it planned to last year. "In part due to the lower than expected redeployment rollout, our revenue synergy realisation has been slower than we initially targeted," Compton said in October.

If the airline achieves everything it aims to in terms of its fleet - the 787 grounding withstanding - it could begin realising the $700 million to $800 million in revenue benefits from the merged networks in 2013, he said.

United's results could turn around this year, but it looks to still be a ways from the impressive returns of many of its peers. Executives anticipate a 4.5% to 5.5% increase in CASM excluding fuel and special items despite all of the initiatives they outlined. During just the first quarter, wage increases for employees and pension benefit liabilities will push the metric up a whooping 8% to 9% based on current guidance.

PRASM is only expected to increase by 2.5% during January. Far short of the continued increases that United will need throughout the year in order to surpass the jumps in CASM. Executives remain optimistic.

"2012 was the toughest year of our integration and it is behind us," says Rainey.

Smisek adds: "We are now in a position to go forward as a single carrier and compete effectively on a global scale." Let's see if United can.