All change at the regional aircraft manufacturers

There have been some significant developments in the regional aircraft sector in 2019, changing the competitive dynamic. After many years in the sector and being a pioneer of the regional jet, Bombardier is following its divestment of the CSeries by also offloading its regional jet and turboprop product lines. Embraer is set to become Boeing Brasil and its main rival in the regional-jet space will be Mitsubishi, which is acquiring the CRJ programme, renaming its MRJ as the SpaceJet, and launching a new scope-compliant M100 version.

The turboprop sector is also changing, with ATR now facing De Havilland Canada again and China continuing development of its MA700, while there are shoots of interest in electrical power.

The new 2019 Cirium Fleet Forecast is predicting demand for over 6,000 regional aircraft deliveries in the next 20 years, so there is a significant opportunity for the OEMs in this market.

The global regional jet market is still very much focused on North America, with a 58% share of the 3,400-strong fleet. It is bound by the scope-clause limitations on regional carriers flying for the big three US carriers – American Airlines, Delta Air Lines and United Airlines. In terms of aircraft capacity and weight, the current scope clause is set at 76 passengers and 39t maximum take-off weight (MTOW). The US regional carriers mainly fly 85-seat types in a two-class, 76-seat configuration, supported by 70-seat and 50-seat types with single-class cabins.

With the current scope clauses unlikely to be further relaxed in the current 2019-20 round of negotiations with the pilots unions, Embraer and Mitsubishi both found that their respective new E175-E2 and MRJ90 new-generation regional jets coming into the market were not scope-compliant on weight. In order to be aligned with scope, operators and manufacturers had to alter their fleet strategies and product offerings.

Embraer’s new, heavier E175-E2 will not now enter service until 2021 at the earliest, although scope-clause relaxation is unlikely before then. Orders for the current E175-E1 are still being placed and the backlog now stands at around 190, including the 70-seat SC variant, which is being used to replace older CRJ700s. 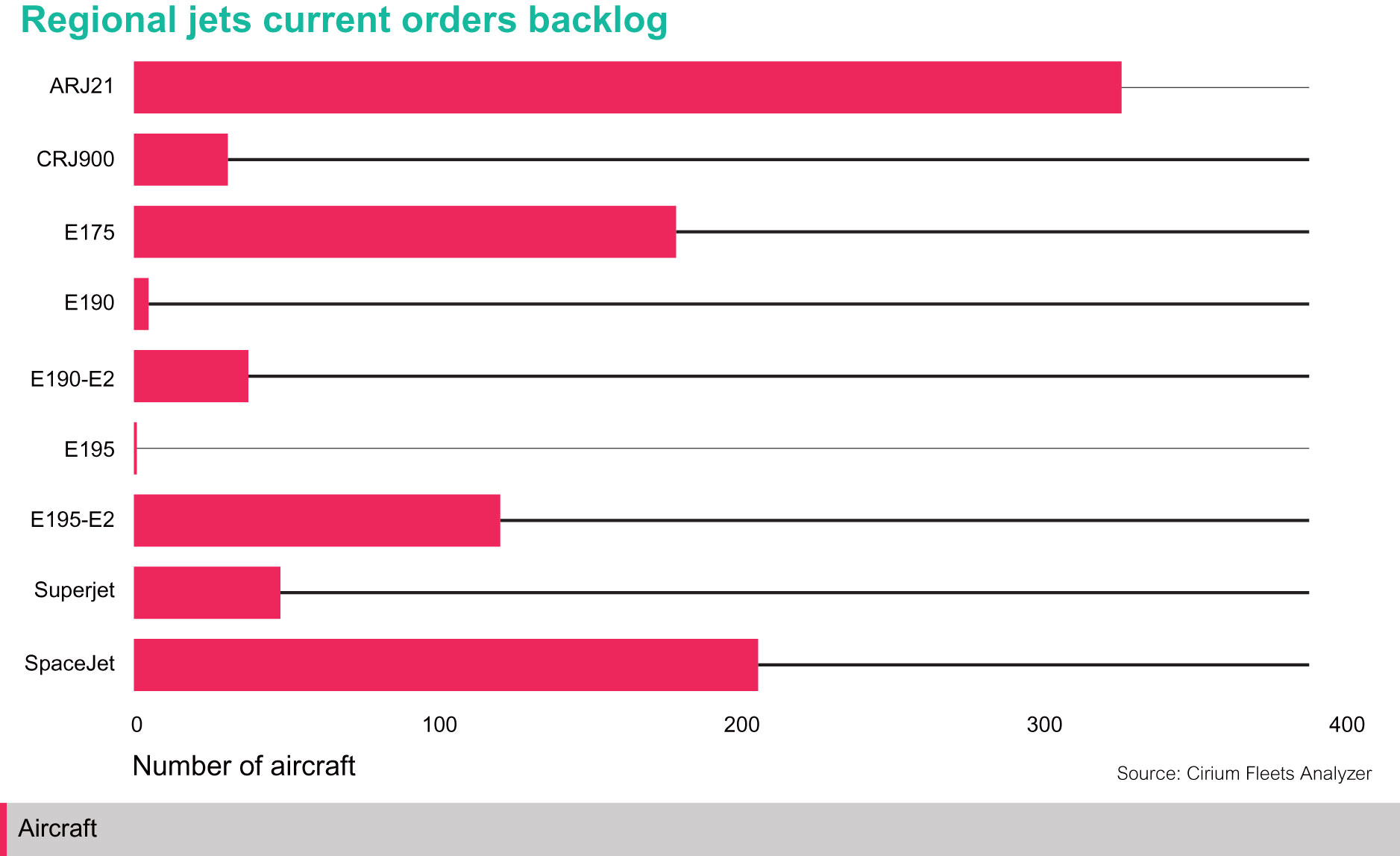 For Mitsubishi, the situation was more serious, with its MRJ90 due in service in 2020, albeit delayed and 150 of its 213 orders held by two large US regionals, SkyWest (100) and Trans States (50). A proposed shrink MRJ70 was deemed to be too small.

Mitsubishi therefore took the necessary decision to drop the MRJ70 and launch a new version, which would be able to meet the scope clause MTOW and carry 76 passengers in a three-class layout. At the same time, it rebranded the family as the SpaceJet. The new scope-clause-optimised SpaceJet M100 is due to enter service by 2024. The MRJ90 has been renamed the SpaceJet M90. The M100 is expected to account for the majority of SpaceJet orders in the long term.

Mitsubishi will also acquire the CRJ programme from Bombardier, including type certificates, production facilities, as well as maintenance, support and marketing and sales activities. The deal is expected to close in 2020 and is worth $550 million. The current CRJ backlog stands at only around 30 aircraft and production is to cease during 2020.

The key element for Mitsubishi is gaining a global support network. This acquisition will give Mitsubishi access to the CRJ customer base and be in a more competitive position against key rival Embraer, in particular when airlines are planning for fleet replacements. There will be a growing replacement of 70- and 90-seat regional jets from the mid-2020s.

Embraer is therefore faced with a competitive challenge in how to meet the US scope clause longer term and compete with the M100. Of the larger family members, the E190-E2 is now in service and the E195-E2 has been certificated, although their delivery numbers and backlog remain relatively low, with just seven in service and 165 on order. These larger regional jets have come under more pressure as Airbus has revitalised the similar-sized A220 (the former CSeries) and some key Embraer customers including JetBlue and Air France have opted for the A220.

China is developing its regional market with the ARJ21, which has just received orders from the three largest Chinese airlines for 35 each. Although the orderbook appears high at over 300, it is difficult to know how firm all these orders are to enable a direct comparison with its rivals, which have 650 on order between them.

The longstanding rivalry between the ATR 72 and Dash 8-400/Q400 in the over 70-seat market has undergone a new twist.

Bombardier has sold the Dash 8-400/Q400 programme to Longview Aviation Capital (which also owns Viking Air, producers of the Twin Otter), which revived the De Havilland brand for the type. The Q400 has found new secondary markets, including Cobham Aviation recently deploying the type for resource-related flights in Australia, replacing BAe 146 and Avro RJ aircraft.

The ATR 72 is the market leader in the 70-seat category and strongly outselling the Q400, while lessor penetration is also focused on the ATR 72 – some 50% of the fleet is managed by leasing companies. In Asia-Pacific and Latin America, the ATR 72 is the leader, with fairly equal fleets in Africa and Europe, and the Q400 ahead in North America. 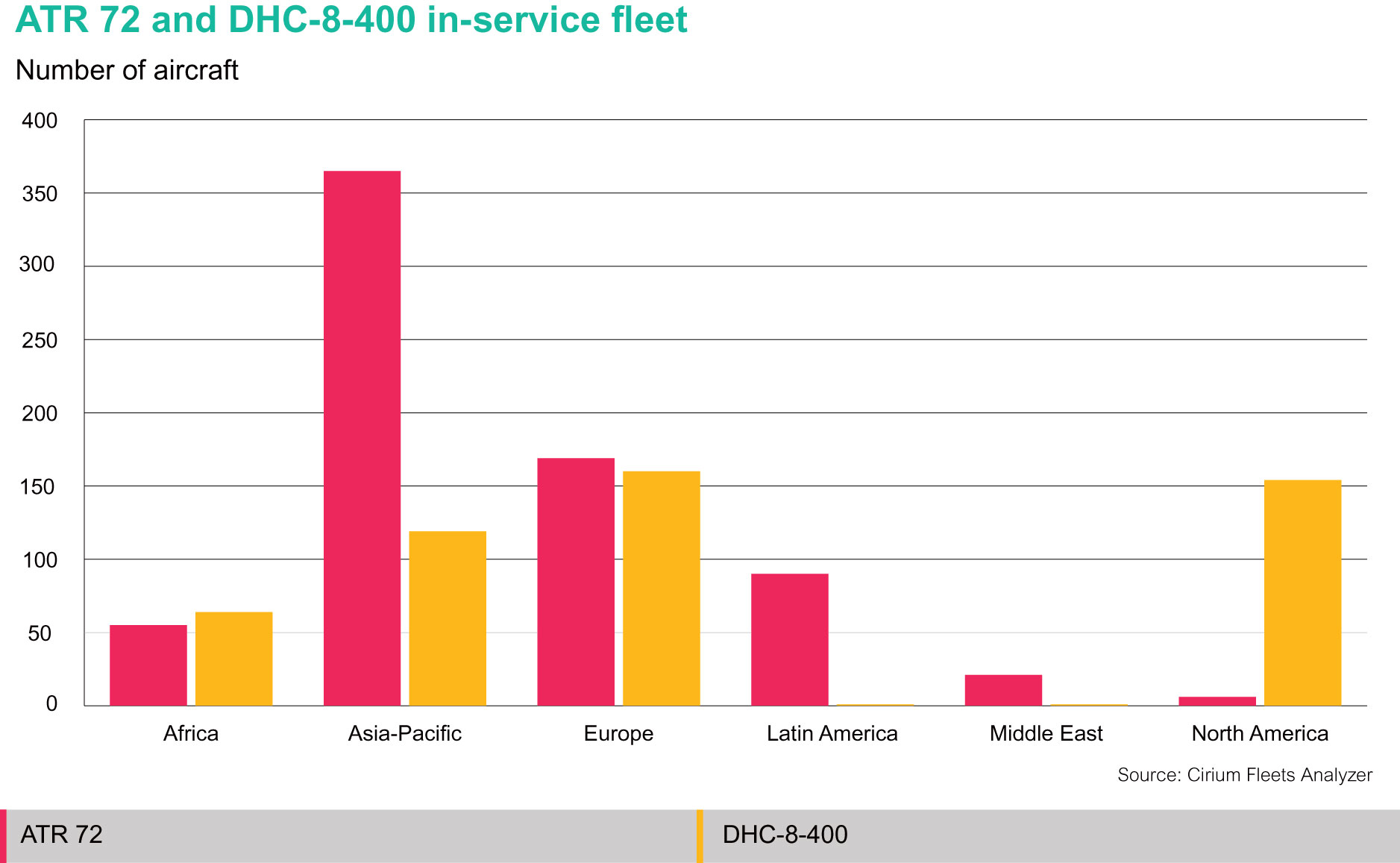 The current passenger turboprop order backlog includes 173 ATR 72s and 46 Q400s. However, ATR faces a rival purely focused on the turboprop market. De Havilland has said it is evaluating product upgrades and a possible 50-seat “shrink” version of the Q400, aimed at replacing ageing aircraft in existing fleets, such as the Fokker 50, ATR 42 and Q100/200/300. High-density versions of the Q400 with 86 or 90 seats, as well as a combi version, are already available and have entered service in selected markets in Asia. Another rival, China’s Xian MA700, which uses the same PW150 engine as on the Q400, is set for service entry before the mid-2020s.

ATR has recently focused on the smaller ATR 42, the market for which seemed dormant. A new short take-off and landing version of the ATR 42 is being launched, with enhanced take-off performance and a reduced runway length requirement of just 800m (2,600ft). The ATR 42 has been selected by some carriers to replace ageing 30-seat turboprops, such as US-based Silver Airways taking the type and phasing out its Saab 340s. There are still over 150 earlier ATR 42s to be replaced and around 450 in the 30-seat size including 178 Q100/200 and 152 Saab 340s.

Looking ahead, interest is growing into the next generation of turboprop engines. Norwegian regional airline Wideroe wants to electrify its fleet of 30-plus aircraft by 2030 and is starting a project with Rolls-Royce to research zero-carbon aircraft. The regional industry could be starting a new cycle of technology change.