Signing a blockbuster order for 260 Airbus A320 aircraft in July 2011, American Airlines killed any hopes that remained within Boeing for launching a clean-sheet replacement for the 737NG.

Airbus had only launched the re-engined A320neo family eight months earlier, but the backlog already stood at a shocking 1,200 orders and commitments after the American Airlines signing. Both manufacturers sensed they were on the cusp of an unprecedented wave of demand by airlines for fuel-efficient new jets. In fact, they were about to enjoy a four-year, single-aisle order binge – and Boeing didn’t want to miss out by waiting several more years to field and ramp-up production of a clean-sheet aircraft.

Thus, Boeing announced a plan to launch another 737 re-engining – the fourth in the ’s 50-year history – by the end of July 2011. A month later, the company hosted a press conference in Seattle to unveil the first details of the newly branded 737 Max. 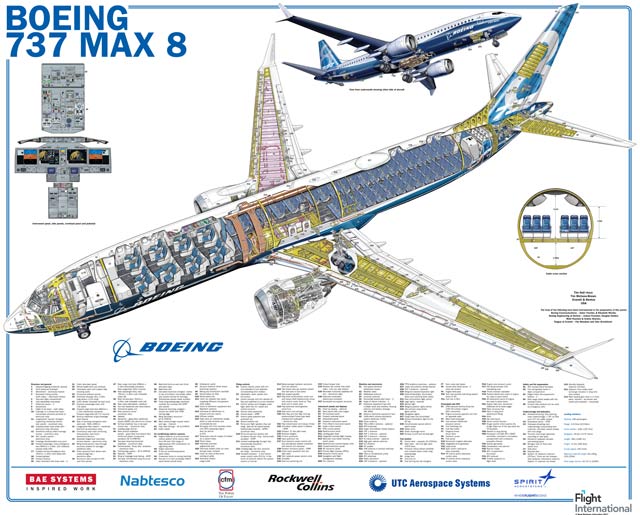 It was clear from the beginning that the 737 Max 8 – the beating heart of Boeing’s single-aisle family – would require more than a simple re-engining. The performance of the-equipped A320neo would require something closer to the transition in the mid-1990s from the 737 Classic to the 737NG, which saw Boeing upgrade the engine, stretch the fuselage and redesign the wing and cockpit. 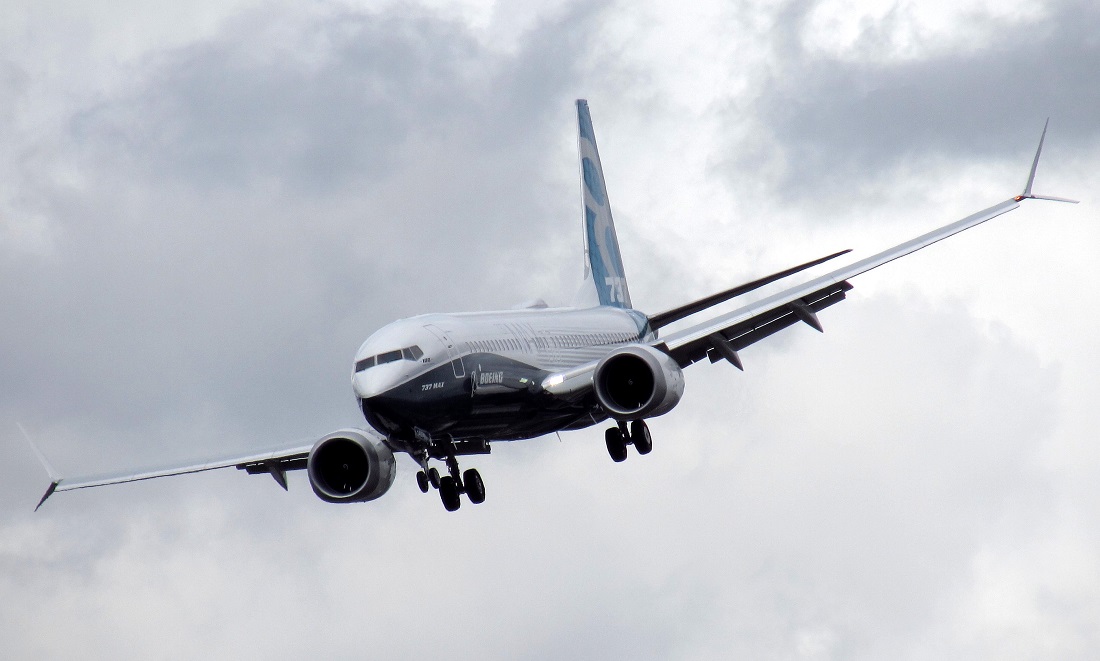 Boeing spent several months after the August 2011 launch re-working the 737 Max configuration, focusing on the engines, nose gear and winglets

For the 737 Max 8, which entered service last month with Malindo Air, the wing and primary control surfaces remain the essentially the same, but virtually everything else – including engines, pylons, winglets, spoilers, tail cone, stabilisers, inlet doors, landing gear, cockpit, electronics bays, cabin interiors and cargo bays – is replaced or tweaked in some way.

That’s not to suggest Boeing didn’t leave mature technology on the drawing board by giving up on a clean-sheet design. The Bombardier CSeries and Irkut MC-21 – with state-of-the-art fly-by-wire flight controls and liquid resin-infused composite wing panels – illustrate what’s possible when a designer starts with a of paper. Other re-engining, such as Embraer’s E-Jet E2 family, also seem more ambitious, boasting new engines, improved and a full fly-by-wire control system.

Boeing’s goal during the summer of 2011, however, was not to push the state-of-the-art in single-aisle aircraft technology. The company’s objective was to at least match the 15% fuel burn reduction promised by Airbus eight months later for the A320neo. 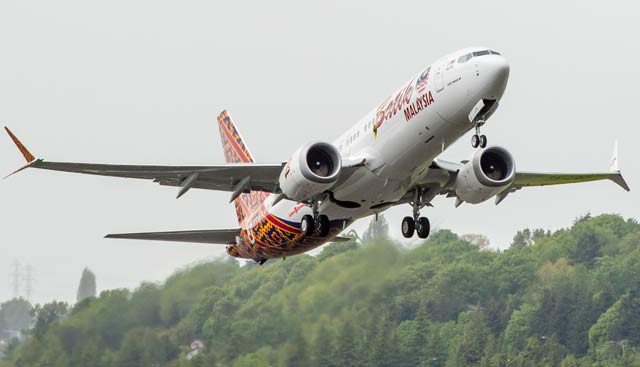 Curiously, the 737 Max configuration unveiled by Boeing in August 2011 fell short of that standard. Instead of matching Airbus’s 15% fuel burn reduction objective, Boeing presented the 737 Max with a 10-12% savings objective.

But the 737-8 concept image revealed at that press conference on 30 August 2011 looked slightly different than the real aircraft that will enter service later this month. Sure, it had the same distinctive CFM International Leap-1B engines, but the fan diameter appears slightly narrower. The 2011 image features blended winglets, not the dual-feather,-tip winglets adorning today’s 737 Max.

In fact, Boeing would spend several months after August 2011 re-working the 737 Max configuration, focusing especially on the engines, nose and winglets. By July 2012, Boeing was ready to display the configuration that matches the real aircraft that rolled out of the factory. The concept that was unveiled at the Farnborough air show – one year after the embarrassing loss of the American order – promised to reduce fuel burn by 14.5%, or 2.5-4.5 percentage points higher than Boeing offered 11 months earlier.

So what had changed?

First, Boeing had assumed airlines would put an asterisk on Airbus’s 15% target, which included the additional of a new feature – the A320neo’s famous – that the 737 already had with its blended winglet. 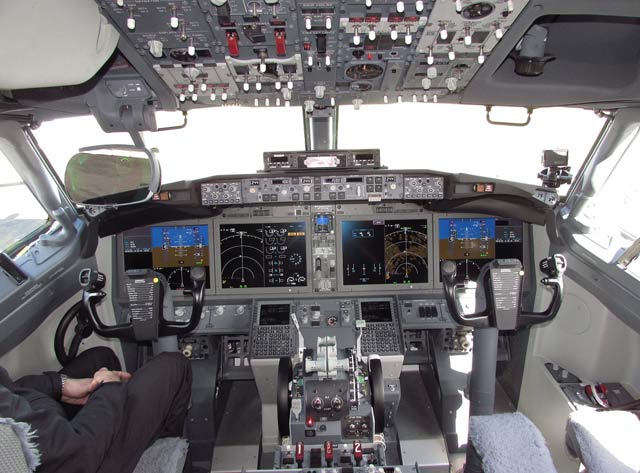 The result is the Advanced Technology winglet on the 737 Max, which Boeing promises will deliver a 1% fuel burn reduction on an 800nm segment compared with a blended winglet. The AT winglet features a dual-feather design, which includes an upward-pointing blended airfoil to reduce drag and a downward-canted device to increase effective wingspan. The 737 Max operates under ICAO Group C standards for access to airport gates. That standard imposes (40m) limit on wingspan. The 737NG wingspan comes in at 117ft5in, leaving Boeing little room to extend wingspan to reduce fuel burn. The solution is the downward canted airfoil.

To explain how it works, Teal grabs a pen and sketches both the upward- and downward-pointing surfaces of the AT winglet.

“If I took this winglet off the top, you didn’t have it on there and you weren’t thinking depth-wise and you look at this, what does it look like?” Teal asked.

“There you go. Right now that’s our most efficient wing treatment. It’s the raked tip. That’s why you see raked tips on the 787, the 747 and really the 777X,” Teal explains. “The most efficient thing I could have done with this the winglet, lay it down and make it a. But then I go beyond the Group C [limit]. But I put the lower on, the lower one is behaving effectively like a rake. And it’s adding effective span.”

That was just the beginning. Boeing needed to do more with the 737 Max to reach the 14.5% fuel burn reduction objective. If the AT winglet added 1-1.5%, Boeing still had to find 2-3 percentage points of savings from elsewhere. Naturally, Boeing turned to the 737’s exclusive engine supplier. As unveiled in August 2011, the Leap-1B engine contributed about 10% of the fuel burn improvement. Now Boeing wanted more. 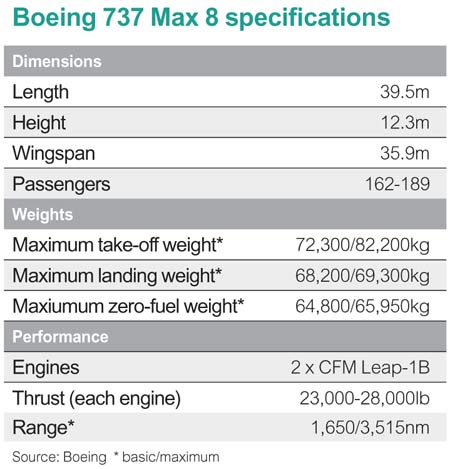 But the original design of the 737 makes such demands trickier than normal. In the 1960s, Boeing designed the 737 relatively low to the ground. It’s so low the main landing gear is stowedby folding into the middle of the fuselage, saving weight on fairings for stowage compartments. The drawback is the lower stance keeps the engines closer to the ground, leaving less room for increasing the fan diameter. The disparity is obvious by comparing the 737 to the A320. The original Airbus single-aisle powered by a CFM56-5B features a fan diameter of 68in, which rises to 78in on the Leap-1A engine for the A320neo. By contrast, the 737NG series accommodates only a 61in inlet fan.

As Boeing contemplated the re-engined 737 Max, fan diameter drove one of the earliest internal debates. Fan diameter is part of the equation that defines bypass ratio, a key metric for fuel efficiency.

“The first thing we did was decide whether or not we would do a 66in fan or a 68in fan from a 61. So that was the debate. So, it was really around which is the most efficient engine for this particular engine wing combination – not bigger is better,” Teal says.

A major issue arose, however, if Boeing decided to go with a 68in fan. To prevent the bottom of the fan case from scraping the runway on take-off, Boeing needed to prop up the front of the aircraft by extending the nose gear by 8in, which would have wider implications for interior structures. A 66in-diameter fan required no such change to the gear height. Ultimately, Boeing decided in this case that bigger would be better, and selected the 68in fan initially for the 737 Max configuration unveiled in August 2011.

Of course, that still wasn’t enough. To reach the 14.5% fuel burn reduction target, the engine would have to change again. Instead of a 68in-diameter fan, Boeing asked CFM to widen the inlet to 69.4in, Teal says. At the same time, Boeing asked CFM to reduce slightly the diameter of the core. The combination of a wider fan and a narrower core further increases bypass ratio. But the larger fan brought back the ground clearance problem. In response, rather than raise the nose gear an extra 1.4in, Boeing placed the engine higher under the wing and further forward, Teal says.

As the engine supplier, CFM recalls a less straightforward process with several iterations of the engine architecture, in which fan diameter and core sizes played a more nuanced role in the final outcome.

“Clearly fan diameter is a factor in this integration, as well as in the engine architecture optimisation, but there is no direct correlation between changing the fan size and what we ultimately did with the core – there is much more to it than that,” CFM says. “Throughout the design and development process, there were changes in fan flow and core flow, among other elements, but they were part of the overall optimisation.” 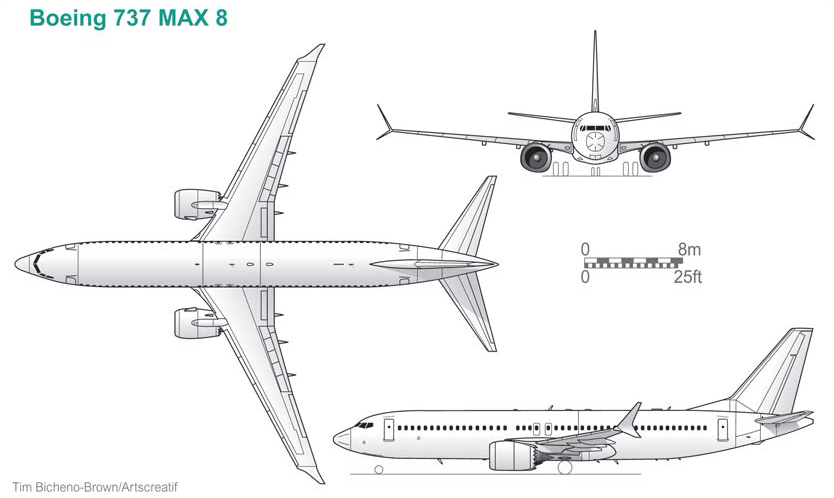 The original change to the nose gear would require extensive changes to the affectionately named “doghouse” compartment beneath the cockpit, which includes the nose gear well, electronics boxes and critical items such as the pilots’ oxygen tanks.

To accommodate the longer nose gear, Boeing moved the forward bulkhead closer to the nose. That shrunk the size of the radar bay, so some of the electronics boxes were moved into the electrical equipment bay. The same boxes on the 737 Max are smaller than compared with the 737NG, due to the miniaturisation of electronics over the past decade, Teal says.

Between the engine and the AT winglet, Boeing accounts for about 12-13 percentage points of the goal to reach 14.5%. Another major change from 737NG that reduced fuel burn by about 1% on the Max family was a tail cone, replacing the 737’s distinctive but unflattering flat tail. The new circular tail cone not only sports a more modern, aerodynamic look, it also eliminates a set of four drag-inducing vortex generators on the aft fuselage. The vortex generators were added after the fact to correct a design problem discovered in flight test in the late-1960s. 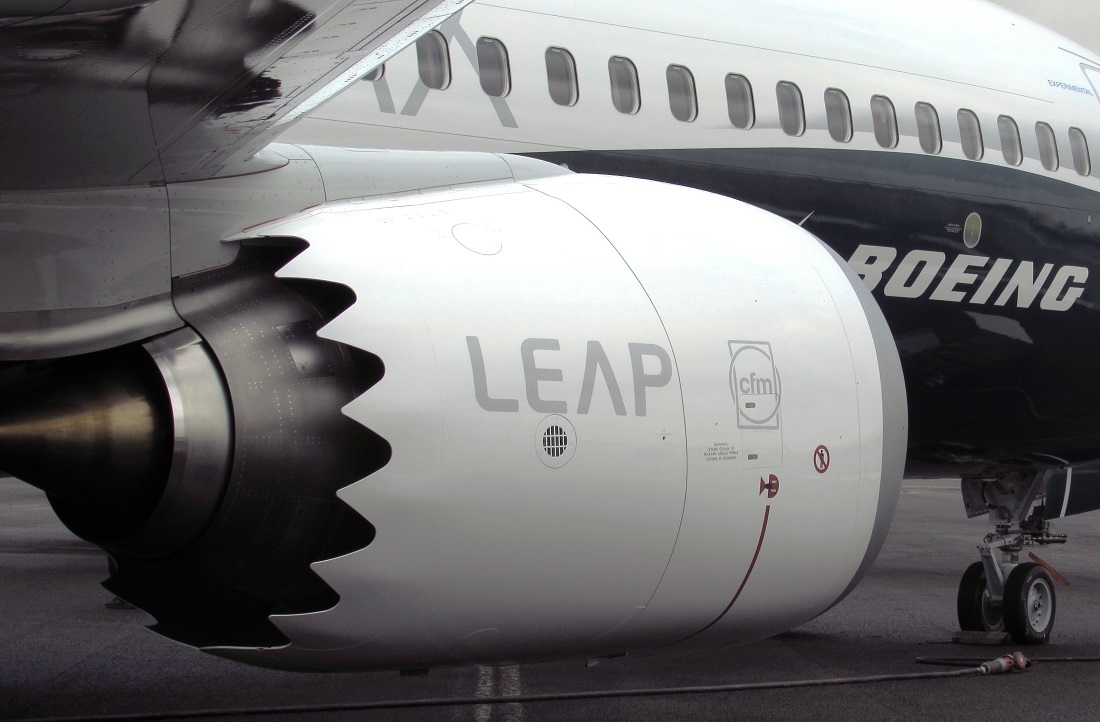 Boeing turned to the 737’s exclusive engine supplier, CFM, for the Max powerplant in the form of the Leap-1B

“The airplane had a vertical bounce to it back in the day, and vortex generators were the aerodynamic fix that smooths that air flow, which stopped the bounce but was drag,” Teal explains.

With the engines, winglets and tail cone changed to improve fuel efficiency, Boeing made other tweaks to offset higher maintenance costs required for some components. Featuring larger engines and winglets, the 737 Max weighs more than the 737NG series. That implies higher costs to maintain wheels and brakes over the life of the aircraft. To look for savings elsewhere, Boeing targeted one of the 737’s biggest maintenance headaches – the pneumatic-controlled bleed air system, which siphons air from the engine’s compressor and uses it to feed cabin air compressors that pressurise the cabin.

“If you have a pneumatic system, you just open it up and you get what you get, and you might be getting more than you need, and when you’re getting more than you need, you’re getting air that should stay in the engine and create thrust. So, we get a fuel burn advantage when we bring in a digital fuel system because you can digitally tune the amount of air that you need in whatever flight regime you’re in,” Teal says.