A year ago, our annual census of the world’s airliner fleets noted that Boeing’s 787 was becoming a star performer, clearly putting behind it the painful memories of a protracted and troublesome development, certification and entry-into-service. This year, Flight Fleets Analyzer data confirms that star status – while the 787’s July 2016 to July 2017 in-service fleet growth slowed to “just” a third, from nearly 50% the year before, the advanced technology widebody is by far the star performer among mainliners.

The math is simple, of course. As the in-service 787 grows, a stable rate of output from Boeing will have less and less percentage impact on the total. Notably, during the past 12 months, the fast-growing 787 fleet overtook the slowly-dwindling 747. 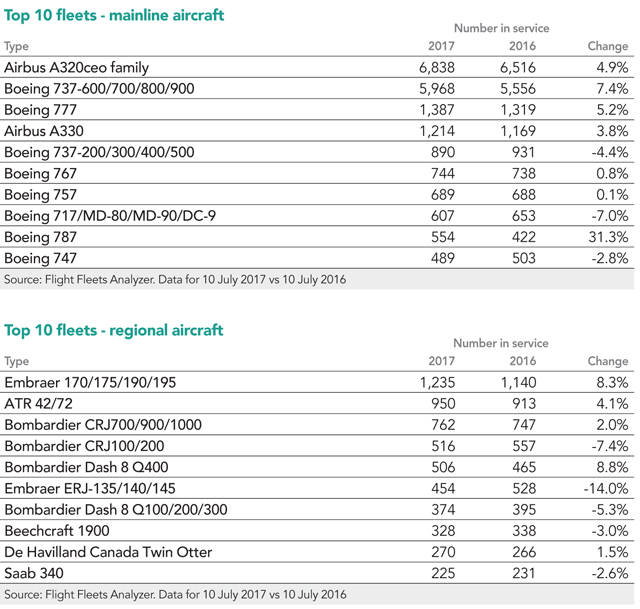 The 787’s rising prominence also has much to do with the simple fact that it is alone among the new major programmes in being at least reasonably up to speed, production-wise. Airbus A350 output has yet to reach pace, similar to A320neo and 737 Max family aircraft, although these types will ultimately see rapid growth, as Airbus and Boeing strive to establish what amounts to mass production for their new narrowbody iterations.

In any case, during the coming year we can expect the 787 to leap ahead of the out-of-production 717 and 757. And, it will come within a hundred units or so of the oldest of Boeing’s 737 iterations – assuming that group’s in-service numbers continue to decline at a steady rate. 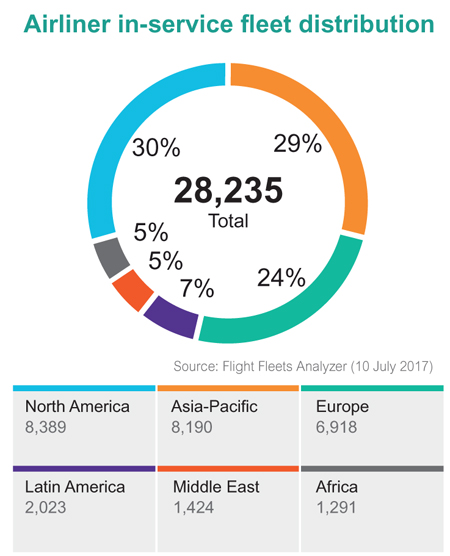 Looking beyond specific aircraft types, 10-year trends in orders and fleet distribution are illuminating. That the global order backlog has grown 65% since 2008 to 14,557 aircraft, is no surprise, given the longstanding drumbeat of big-order news. It is also not surprising – however notable – that the backlog peaked two years ago.

More interesting is that fact that while much aerospace industry attention has been paid to the Asia-Pacific region, it does not lead the backlog growth league table. That distinction falls to North America, where 69% growth over the decade has outstripped the industry as a whole. In second place is Europe, followed by Latin America, leaving Asia-Pacific in fourth place.

The story is filled out with a look at the 10-year trend for the in-service fleet. North America’s mere 3% growth points to orders for new aircraft being replacement demand. Europe – up 12% – has seen a bit more fleet growth but, still, mostly replacement. Asia-Pacific and the Middle East – fleet growth of 70% and 73% respectively – show what happens when a small base is combined with stellar demand growth.

But nothing is well-defined without considering China on its own. There, the order backlog has remained fairly stable over the last decade – while the in-service fleet has nearly trebled.

Indeed, the newly published 2017-2036 fleet forecast from Flight Ascend Consultancy points to nothing short of explosive growth in China, where the airline fleet is expected to grow 6.1% annually, to 9,600 aircraft in 2036. About 96% of that fleet is currently used in the passenger market and 4% is used for carrying cargo; this share will rise by 3 percentage points for cargo by 2036 due to strong e-commerce growth.

China’s fleet is forecast to account for 19% of the global total by the end of the 20-year forecast period, compared with 11% at the end of 2016.

As for deliveries, China is forecast to take 8,165 new aircraft in the next 20 years, with a value of $572 billion, including some 7,825 passenger jets, 250 passenger turboprops and 90 freighters. This will include 5,610 passenger single-aisle types and 1,680 twin-aisle types. These deliveries are predicted to represent a 19% share of the global total and will average some 450 per year by the 2030s.

Flight Ascend expects just over 70% of the current China fleet to be retired during the period, but some three quarters of deliveries are for growth. China will also take over 560 freighter conversions.

In order to cope with the traffic growth led by China’s growing middle class, international routes are increasing and some 130 new domestic airports are being built in small/medium-sized cities over the next 10 years. The passenger jet fleet is therefore forecast to grow from some 2,775 today to over 8,600 in 20 years.

Perhaps surprisingly, China has been relatively slow to develop a network of regional feeders, with only around 140 aircraft in service at end-2016, mostly 85- and 100-seaters. The 50-seater fleet is being rapidly phased out. Deliveries of the new Chinese-built Comac ARJ programme, although delayed, began in 2016; Flight Ascend anticipates that the development of airports in smaller cities will lead to growth of regional connections. The delivery forecast of some 535 regional jets over 20 years is just 7% of China’s total and will be initially focused on 85-seaters like the ARJ21 before more 100-seaters in the 2020s. Overall, the fleet is expected to rise to 540 by 2036. 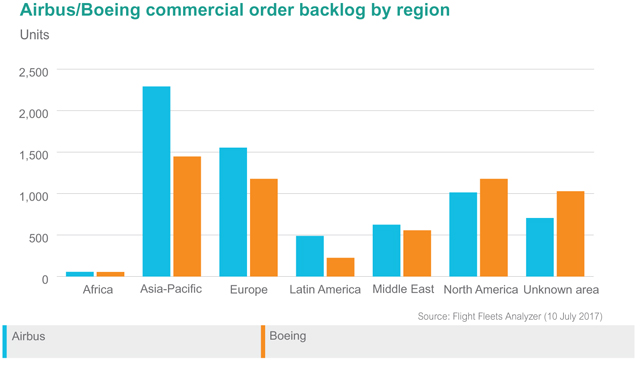 Globally, Flight Ascend forecasts 43,725 new commercial jet and turboprop aircraft will be delivered into passenger and freighter airline service over the next 20 years. With that newbuild activity, the global commercial aircraft fleet in service is expected to increase by 81% to 51,200 aircraft at the end of 2036, including 42,855 passenger jets, 4,470 passenger turboprops and 3,875 commercial freighter aircraft.

Single-aisle jets will account for 65% of deliveries and 48% of delivery value, with twin-aisle types at 17% and 42% respectively. The core of the single-aisle market will remain in the 150-seat size with over 60% of demand by value, although the larger 180-seat size will take an increasingly bigger share. The 300-seater twin-aisles will lead their category with 40% of twin-aisle value.

Just under half of deliveries will be for replacement purposes, as some 74% of the current fleet is forecast to be retired during the 20-year period. This includes around 18,930 passenger aircraft, with an additional 2,180 being converted for freighter service, including 1,250 single-aisle types. Some 1,840 freighters will also be retired. 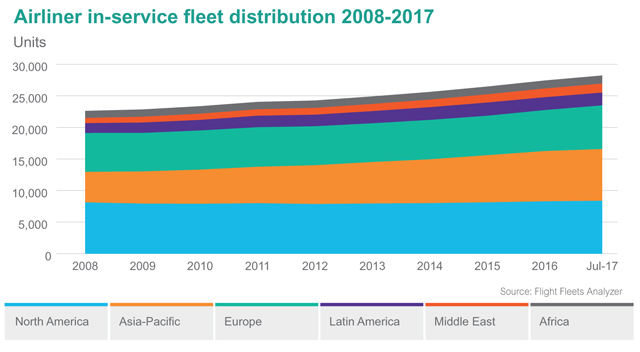 Continuing the trend of recent years, the Asia-Pacific region should be the leader in fleet growth, taking over 40% of deliveries – including 19% for China alone. The more mature markets of North America and Europe will take 18% and 16% respectively.

Airbus and Boeing are expected to remain the two largest commercial aircraft original equipment manufacturers, between them delivering an estimated 86% by value of the world’s commercial jet aircraft through 2036. However, the other manufacturers including Bombardier, Comac, Embraer, Irkut, Mitsubishi and Sukhoi are expected to capture an increasingly significant volume of jet demand, between them accounting for almost $250 billion of delivery value in the forecast period. 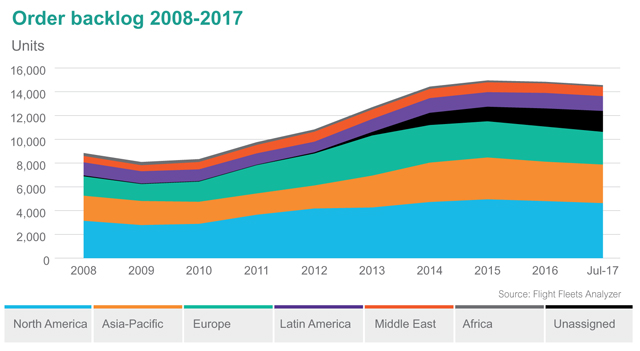 Flight Ascend reckons the twin-aisle market will remain the last duopoly in the commercial aircraft sector for another decade but Comac and UAC are launching a joint programme for a 280-seater and there is a potential $100 billion of additional deliveries forecast for twin-aisles from the mid to late-2020s from the existing or new OEMs in the sector.

In the smaller sizes, the turboprop market is expected to be worth $64 billion in deliveries, led by the 70-seat sector, with potential for a larger 90-plus-seat size from the mid-2020s. Regional jets will be a $120 billion sector, led by aircraft of over 90 seats, although a third of value will come from 70-76-seaters serving the North American markets.