ANALYSIS: A look back at Comac's first 10 years

When China declared its ambitions to develop a large passenger aircraft and become a world-class player in aircraft manufacturing, it established the Commercial Aircraft Corporation of China (Comac) to spearhead this dream.

The significance of Comac to China was obvious from the start, when key businesses were taken from AVIC to form its foundation, and with political heavyweights placed at its helm.

This month marks the Shanghai-based manufacturer's 10th anniversary, but it appears that Comac has chosen to let the occasion pass with little fanfare. There were no high-profile celebrations graced by government officials and televised on state-owned CCTV, and the only sign of the occasion is a dedicated page on its website.

The reserved attitude could stem from Xi Jinping's austerity measures for state-owned enterprises, which have ended the once common practice of elaborate banquets laid on at taxpayers' expense. Comac's reservations could also reflect a desire to focus on a plate full of projects.

Comac was launched specifically to build a narrowbody jet – thereafter branded the C919 – but it also inherited AVIC's ARJ21 regional jet programme. In its first 10 years, milestones include the entry into service of the ARJ21 in 2016, and the first flight of its in-development C919 in 2017. It also has a joint venture with United Aircraft (UAC) to develop a 6,480nm (12,000km) range widebody, the CR929, for the 2025-2028 timeframe, with work now in the preliminary design phase.

With these three programmes, the young manufacturer essentially has a foot in a full range of products, covering 90 to 280 seats.

But being a rookie in the highly complex field of aircraft manufacturing means that the ARJ21 and C919 programmes have both experienced numerous hiccups and delays. Some industry observers are concerned that tackling two major commercial aircraft programmes simultaneously will stretch the company's resources.

A spokesman tells FlightGlobal that this is in line with Comac's product development ideology of concurrently developing a generation of aircraft, while producing another generation, and pre-researching a next generation.

To help with the CR929 and advanced technologies, Comac also has a research centre in Beijing. This adds to its impressive footprint in Shanghai, where its main offices and labs are located in a sprawling office park. It has also built a major production centre with five modern assembly lines near Shanghai's Pudong International airport.

Despite the investment in impressive physical infrastructure, critics have slammed Comac for a lack of innovation. They say it produces outdated aircraft based on Western suppliers' old technology. Proponents argue that this misses the point. They say the ARJ21 and C919 were never meant as game-changers, but as learning projects that laid the foundation for future programmes.

The Chinese airframer is under no delusions about its deficiencies. Before the ARJ21, China never had a civil aircraft programme complete the process of design, certification, production and delivery. Every step in the regional jet's development, it tells FlightGlobal, was an exploration in itself. Its biggest challenge, essentially, was having to start from scratch.

Besides the weighty task of programme development, it had the added task of building infrastructure, creating processes and establishing leadership and expertise. In 10 years, its workforce has grown from 2,800 to 11,000.

"We went through many difficulties and challenges in terms of manpower, programme management, key technology research, systems integration and also building customer support.”

The ARJ21 was launched in 2002, but received Chinese type certification only 12 years later. It took another two years for the aircraft to enter service, and yet another year passed before a production certificate was awarded.

Even now, the dated aircraft is still being optimised. Only in March did it complete crosswind validation tests, finally allowing the jet to operate in all weather conditions. The GE Aviation CF34-10A-powered jet also has yet to receive Western certification, despite the US Federal Aviation Administration having conducted a shadow certification.

With the C919, Comac wants to achieve certification and get the aircraft into service between 2020 and 2021, more than 12 years after its launch. The narrowbody programme started before Airbus and Boeing even decided to re-engine their narrowbody types, but both the Neo and Max are already in service, while the major milestone for the C919 so far is its May 2017 first flight.

Western suppliers that worked on the ARJ21 say that before the regional jet, Comac did not even know how to provide suppliers with basic quotations and defined specifications, nor understand the complexities of aircraft integration, as well as certification. Experienced suppliers had to step up and guide it along. 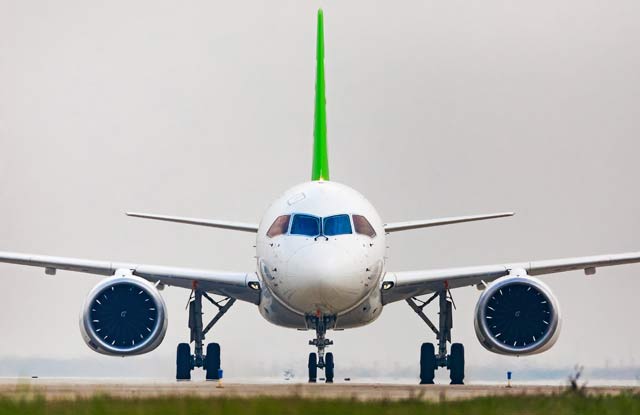 In addition to the political task of developing a technologically advanced aircraft, Comac has also had to bring local suppliers, many of whom were inexperienced, into line. Apart from its own steep learning curve, Comac has had to deal with novice suppliers.

Today, Comac says it has strung together a domestic and international aerospace supply chain comprising over 200 companies, 36 universities and millions of industry staff. It is also proud of the growth it has brought to Shanghai's commercial aerospace sector, quoting statistics that total output value grew more than six times to CNY7.96 billion ($1.28 billion) in 2015, from 2007, before the state-owned enterprise was launched.

Richard Aboulafia, vice-president of analysis at Teal Group, says the main differences between Comac's first 10 years, compared with Boeing and Airbus, are that the Western manufacturers were free to source the best technologies and systems and had slow, modest goals.

The high levels of government control at Comac, coupled with demands for replicating all parts of the supply chain in-country with no intellectual property protection for vendors, also spells disaster, he adds.

Corrine Png, chief executive of transport equity research firm Crucial Perspective, offers a more positive outlook. She believes Comac's acquisition of technology transfer and know-how from world-class OEMs via joint ventures is a "clever strategy". Without foreign help, it would have taken far, far longer to develop the necessary expertise.

Forecast International's defence and aerospace companies analyst Richard Pettibone points to the public perception of a "made in China" label in the West as Comac's biggest weakness.

"Even with FAA certification, it is unlikely that any major carrier would opt for Chinese aircraft due to public perception of inferior quality. Further complicating matters would be the lack of a global support network. For at least the next 10 years, Comac's aircraft are going to be limited to service in China and its satellite states," he says.

Analysts agree that with the world's largest jetliner market in its backyard, and the immense government support insulating it from financial pressures, Comac has the ingredients necessary for success.

Indeed, despite being nowhere near certification, it already has commitments for 815 C919s from 28 customers. There are also commitments for 453 ARJ21s, although it is unclear how many of these will actually be delivered.

Still, Comac wants to be internationally recognised. It has made a point of being present at major air shows such as Paris and Farnborough, where it displays models of its aircraft at large and strategically located stands, sparing no expense. All these count for little, however, if it is unable to gain Western certification for the C919, a necessity to show China's ability to build a safe aircraft, and not merely by its own standards.

Comac acknowledges that challenges and opportunities will remain in its future, with key technologies that need to be tackled, production efficiency to be improved, supply chain management to be enhanced, and the markets for its aircraft to be expanded.

Png estimates that Comac could account for 19% of the country's owned aircraft fleet. The C919 and its improved variant will have no lack of orders from Chinese airlines, lessors and emerging markets, with deals sweetened by favourable financing from Chinese financial institutions and the country's export-import bank. The key, however, is preventing production and delivery delays, which would make its aircraft less competitive.

Despite its potential, Comac remains decades behind competitors, and its aerospace dream still has a long road ahead. Comac must establish a comprehensive global customer support network that benchmarks against those of Airbus and Boeing. The dispatch reliability of its aircraft must match those of competitors. It also needs to win over passengers – both at home and abroad – who are sceptical about the reliability of Chinese-made aircraft.

The manufacturer agrees: "We're like a 10-year-old child who still needs to continue to grow and improve. What we need to do now is to be focused and to put one foot in front of the other, follow the developmental rules of aircraft manufacturing, insist on prioritising safety, be open to co-operation, and build products that pilots love to fly, airlines love to buy and passengers love to travel on."