Airbus's maiden flight of the A330neo is something of an improbable achievement, considering that the airframer originally scrapped its strategy of re-engining the A330 after it failed to gain traction as a Boeing 787 rival.

But the A330-900 which lifted off from Toulouse on 19 October benefits from the strength of demand for the A320neo, a programme which demonstrated that re-engining could be pitched as a genuine and desirable enhancement of a popular airframe.

Airbus's previous attempt to re-engine the A330 – using the General Electric GEnx and the Rolls-Royce Trent 1700, a modification of the Trent 1000 – left the perception that it was hurriedly passing off a warmed-over design, disguised with a new "A350" name, to counter a fresh US competitor.

With the A330neo, however, Airbus is underlining continuity of the A330, more honestly positioning the re-engined twinjet as an evolution of its strongest long-haul product.

"We want to keep all that's good [about] the A330 on the A330neo," says Airbus head of twin-aisle marketing Crawford Hamilton.

But the head of the A330neo programme, Odile Jubecourt, nevertheless stresses that "almost everything is new about this aircraft, technically and industrially".

Airbus has, ironically, capitalised on technology incorporated into the A350 XWB – the aircraft which replaced the original re-engined A330 concept – to develop the A330neo.

Its Rolls-Royce Trent 7000 engines, while still based on the 787's Trent 1000-TEN powerplant architecture, use Trent XWB technology in areas such as the core compressor.

"We used know-how gained on the A350 to develop a fully-integrated and optimised new pylon," adds Jubecourt, claiming that the design results in "zero compromise" on performance.

The distinctive swept wing-tip "sharklets" used on the A350 have been adapted to the A330neo, increasing its span over the A330 by 6% to 64m (210ft) and improving the lift-to-drag ratio. 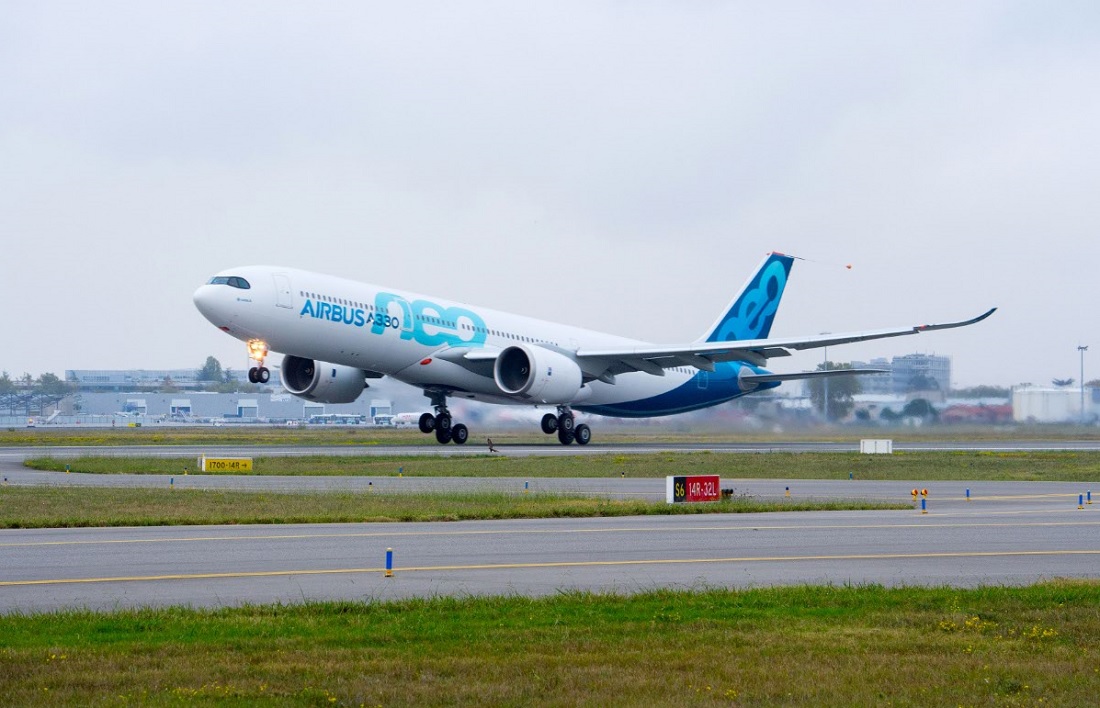 But the wing has also been modified, says Jubecourt, with a twist to optimise the aerodynamics, while the inboard slat and the fairings for the flap tracks have been reshaped. The root-to-tip refinement also features a new composite upper fairing at the fuselage interface, and LED technology in navigation and landing lights.

As part of the test programme for the wing, Airbus is using a technique transferred from A350 testing, using micro electro-mechanical systems installed on a series of strips, to measure precisely aerodynamic pressure distribution across the wing surface.

This aircraft, MSN871, was originally built for the military Multi Role Tanker Transport programme, but operated as an A330neo testbed for about 18 months to validate updated flight-control laws and icing performance and to support de-risking of aircraft systems.

Airbus head of flight and integration tests Patrick du Che says "back to back" tests with the A330 and A330neo, using the micro pressure systems, will provide data on load changes to help validate the wing structure.

While Jubecourt highlights the 39-month interval between programme launch and first flight, far shorter than the A320neo's, the original schedule ambitiously aimed for entry into service at 42 months.

At the A330neo unveiling in July 2014, Airbus chief operating officer for customers John Leahy said the Trent 7000 engine would "start flying in the beginning of 2017". But a heavy workload at Rolls-Royce, pushing back the development, has left the A330neo several months off track. Airbus will hope to claw back some of the overrun during the certification campaign.

Both of the initial A330-900 certification aircraft will carry a medium level of flight-test instrumentation.

MSN1795 will feature Honeywell flight-management and satcom, MSN1813's FMS will be from Thales and will have an Iridium satcom. One will be fitted with Messier-Goodrich brakes, the other with Honeywell brakes. Both A330-900s will have dual head-up displays. 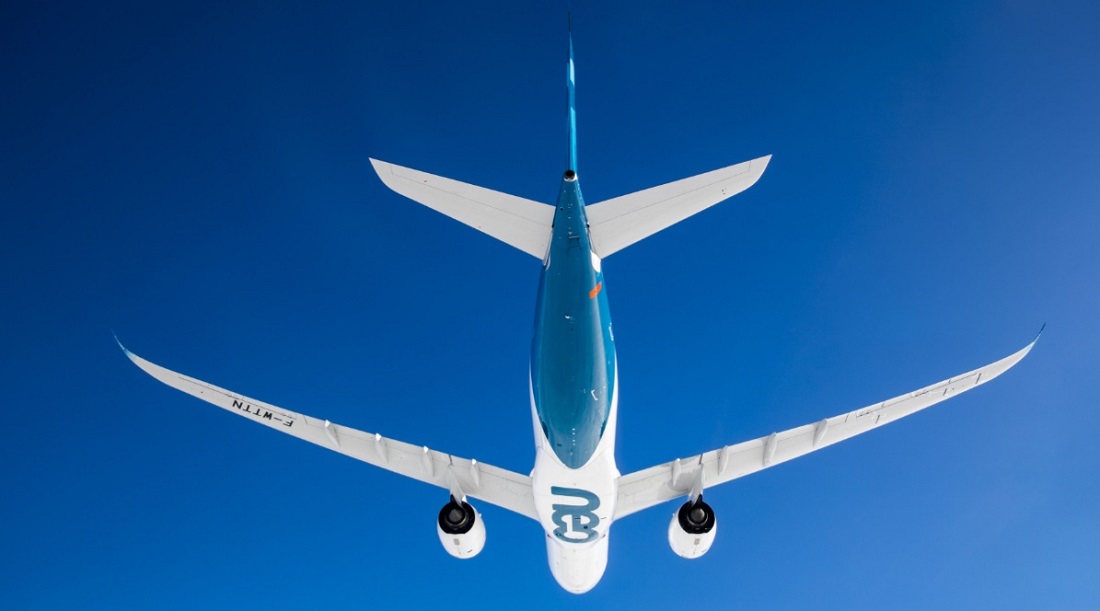 Test instrumentation will receive data on 1,375 on-board measurements and cover over 98,000 parameters, with some 60GB of data recorded each hour of flight. Du Che says a pair of flight-test engineers and pair of engine specialists will occupy dedicated stations on the twinjet.

The maiden flight aimed to open the flight envelope for the A330-900 and – over the course of a 4h 12min flight, partly conducted in clean configuration with landing gear retracted – its crew explored the handling of the aircraft at 10,000ft before climbing to 20,000ft and 30,000ft: beyond du Che's initial expectations for the sortie, given the changeable weather conditions.

Test pilot Thomas Wilhelm says the first flight was "nearly perfect", adding: "We had pretty good conditions outside, calm air, we could really check the aircraft from low speeds to high speeds... all the configurations we wanted to see. We were really, really happy with the performance of the aircraft."

MSN1795 will be tasked with the icing tests – with blocks simulating ice build-up attached to the flight surfaces – as well as cold-weather tests, normally carried out in Canada. It will also be used for external noise assessment. Du Che adds that the aircraft will be used for autoland work, adding: "There will be a lot of tests on autoland."

This aircraft will be fitted with a tail bumper, a protection fixture beneath the aft fuselage allowing high angle-of-attack during rotation for minimum-unstick checks. 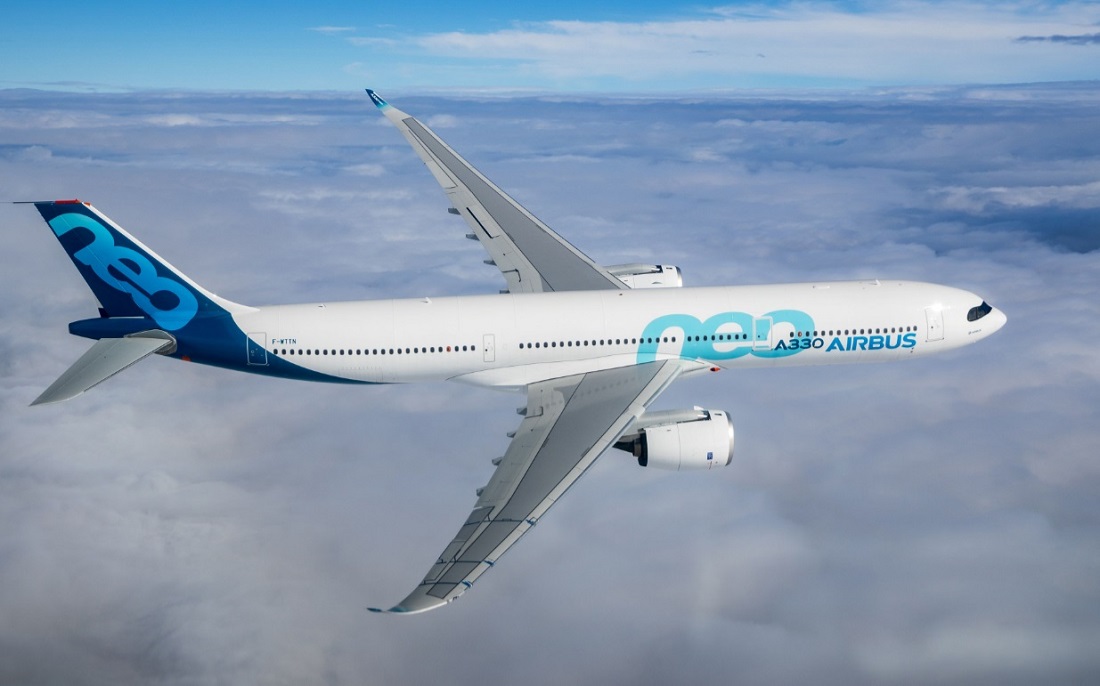 The second aircraft, MSN1813, is set to fly in November, says Jubecourt. Its primary duties will include natural icing tests, and it will be assigned to the hot-weather campaign – typically conducted in the United Arab Emirates – as well as high-altitude assessment, likely to take place in the Bolivian capital La Paz.

Although based on the Trent 1000-TEN, the A330neo required a conventional bleed unlike the 787's engine. Davie adds that it also uses a new full-authority digital engine control, not from the -TEN, to "meet Airbus design requirements between the engine and airframe", as well as a new gearbox for the generators.

The engine was not carried on an airborne testbed but instead flown first on the A330-900, although the manufacturer had conducted some 2,000h of simulated flights with the powerplant.

MSN1813 will be fitted with rakes, pressure sensors in the primary and secondary engine flows enabling actual thrust to be compared with that measured on the ground test bench.

This aircraft will be used for route-proving tests, around 150h in total, but a third aircraft – the initial customer airframe, MSN1819 for TAP Portugal – will be recruited to wrap up the campaign, by validating the Airspace cabin interior fitting. Artificial passengers will be installed for ventilation analysis and other cabin environment measurements.

Initial tests on the Airspace cabin, which modifies the A330 cabin to offer additional seats, larger luggage bins, upgraded lighting and other design details, have already been performed using the A330-200 test airframe. 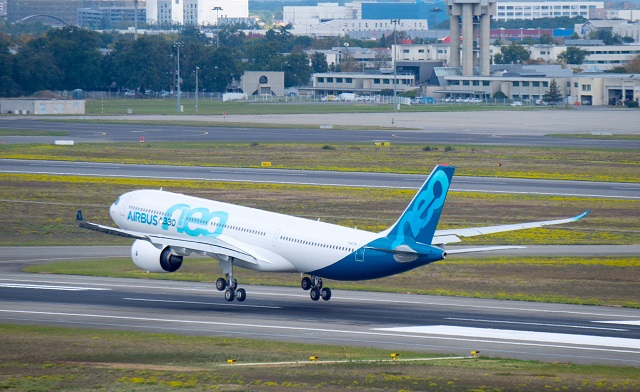 Du Che notes the A330neo is subject to "tougher" regulations than the original A330, but that its flight-test programme is nevertheless about half the duration of an entirely new airframe.

Airbus will employ its "Airline1" preparation strategy for the A330neo. Originally created for the A350, the strategy involves mirroring airline operations ahead of entry into service.

No specific delivery date has been disclosed for the first A330-900 to TAP but Airbus says it intends to hand over the aircraft in "mid-2018".

The airframer has commenced manufacture of its second A330neo variant, the 257-seat longer-range -800, which it aims to fly next year. The initial aircraft, MSN1888, will conduct some 300h of airborne tests.

Airbus launched its longer-range A330, the A330-200, in November 1995 and achieved first flight in 21 months, with certification on the first of three engine variants following seven months later.