As Airbus closes on certification and first deliveries of the A350-1000, its smaller sibling has been earning its crust on global networks for 30 months. And the 80 A350-900s now in service with 12 operators are demonstrating the twinjet's deployment flexibility, flying relatively short-haul routes, mid-distance sectors and very-long-range services. 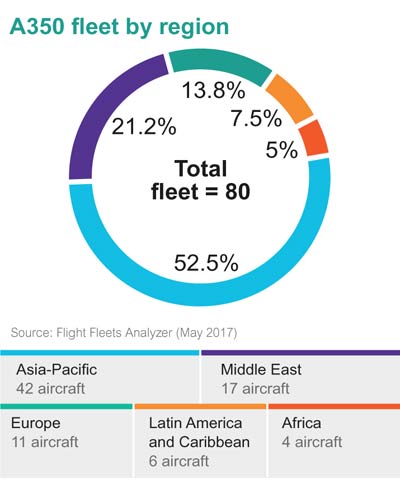 The A350-900 made its Paris debut in 2013 when it flew past Le Bourget just a week after its first flight. Eighteen months later, in January 2015, the Airbus big twin made its service debut with Qatar Airways. Appropriately, the Doha-based carrier is the largest operator, with 17 in service (including three leased from LATAM Airlines) followed by Cathay Pacific and Singapore Airlines (SIA) with 13 aircraft each.

Flight Fleets Analyzer data for 1 May shows that half of the 80 A350s delivered to date are in service with six Asia-Pacific carriers, while a fifth of the fleet is flying from the Gulf (all with Qatar Airways). Finnair and Lufthansa are the only European operators, accounting for 14% of the fleet.

Data from SRS Analyzer by FlightGlobal's Diio division shows that A350 route networks span intra-Asian operations as well as Asia-Europe, intra-Europe and transatlantic services. SIA can boast the longest and shortest sectors – Singapore to San Francisco (7,340nm/13,600km) and Singapore to Kuala Lumpur (160nm).

"That longest route across the Pacific between Singapore and San Francisco highlights the range capability of the type, even before the ULR variant comes into service," says Richard Evans, senior consultant with Flight Ascend Consultancy. "The Boeing 787-9 is also being used on ultra-long-haul flights – Qantas will use it to launch Perth-London services – and these examples demonstrate how the new aircraft/engine combinations are capable of flying routes that previously needed the A340-500 and 777-200LR."

Evans points out that the A350 is starting to be seen on Atlantic routes. "Lufthansa has replaced A330-300s and A340-600s on Munich-Boston services while SIA has replaced its 777-300ER Singapore-Moscow-Houston flight with an A350 service that now routes via Manchester."

Airbus has been progressively ramping up A350 output, delivering 49 aircraft last year as it works towards more than doubling that rate to 10 a month by the end of 2018. But cabin seating has been a supply-chain concern that continues to hamper the ramp-up effort. 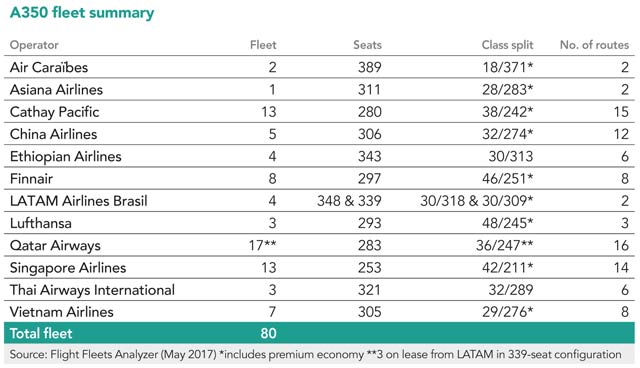 The manufacturer remains under pressure to produce a "double-digit" number of heads-of-version aircraft – initial new configurations – due this year, says Airbus chief financial officer Harald Wilhelm. Speaking in April at a quarterly briefing, Wilhelm said the aircraft entering the final assembly line in Toulouse were "compatible" with the line's ability to accommodate outstanding work, and that this was essential to ramp-up stability.

But Wilhelm adds that, while the supply chain performance is "improving", the difficulties are not "completely over", highlighting the particular situation regarding seat supply. 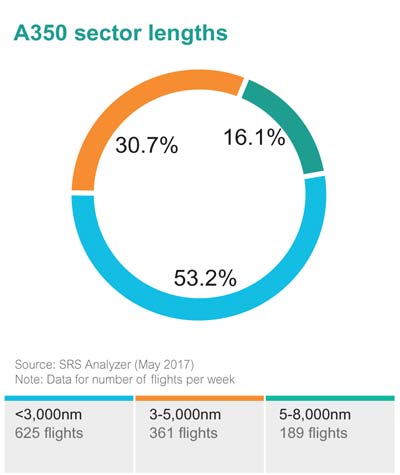 "Significant improvement [still] needs to be done in terms of quality," he says. "Quality at delivery but also quality after delivery."

As new operators are joining the programme at regular intervals, analysis of the A350-900's deployment can be slightly skewed as aircraft are allocated to relatively short routes initially to build experience on the type.

Nonetheless, the average block time for the fleet is a very respectable 7.2h, says Evans, showing the aircraft is being used on longer stage lengths than the A330 (see chart).

"However, several airlines are using the A350-900 to replace and supplement their fleets of A340s and older 777-200ERs," he says. "Within the average, there are airlines scheduling the A350 on many shorter routes, especially within Asia-Pacific. This explains the fact that 50% of the flights are on routes below 3,000nm."

The proportion of sub-3,000nm routes is higher than our analysis a year ago when a total of 26 aircraft had been delivered, which partly reflects the number of shipments to the Asia-Pacific carriers. "This would appear to suggest that carriers feel the A350 is cost-competitive on these shorter trunk routes," says Evans.

LATAM Airlines remains the operator with the highest average sector length, at 10.7h. Four airlines are in the 8-9h band – Finnair (8.8h), SIA (8.7h), Air Caraibes (8.4h) and Lufthansa (8h). The most recent operator – Asiana – is averaging just 3.8h with its single aircraft.

Seating arrangements across the 12 operators varies from as low as 253 seats (SIA) to as high as 389 (Air Caraibes). The majority of operators have configurations of between 280 and 320 seats, slightly lower than the "typical" count of 325 seats that Airbus quotes for the -900. However, almost all the airlines have a three-class layout that includes business as well as premium and standard economy cabins.

"Nine of the 12 A350 operators have installed premium economy – showing how important this class of cabin has become," says Evans. "How long can Gulf carriers like Qatar and Emirates hold out against this trend?" 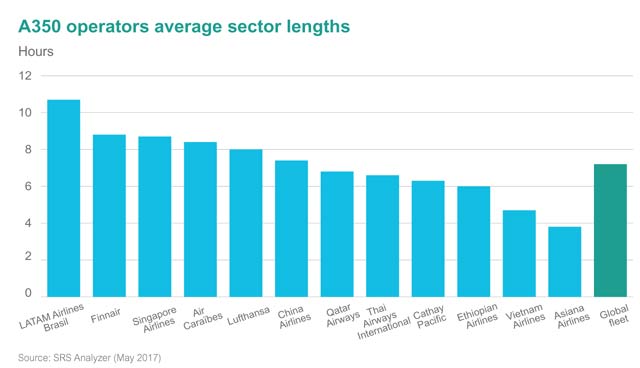 The three A350s Qatar is leasing from LATAM are operating in the Brazilian carrier's configuration, which will give it experience of premium economy. "It will be interesting to see if they view it as a benefit," adds Evans.

As well as the production ramp-up, Airbus's main near-term challenge is to complete the test and certification programme for the A350-1000, clearing the way for deliveries to begin to Qatar Airways later this year. Meanwhile, Airbus is preparing to welcome more -900 operators into the fold. Next in line to receive their aircraft are the first North American A350 operator, Delta Air Lines, Brazil's Azul, Hong Kong Airlines and Malaysia Airlines.