ANALYSIS: After a record year, airframers see dip in backlog

Airlines took delivery of a combined industry record of 1,704 commercial aircraft last year, with Flight Fleets Analyzer data showing this as a 2% rise from 2015’s total and the sixth consecutive year of increased deliveries.

Just over half of all aircraft delivered went to network carriers – a sector where deliveries continue to rise at about 3% a year. Fleets Analyzer data shows that low-cost carriers received 26% of the total, and regional airlines 17%.

Boeing handed over 726 commercial aircraft in 2016, excluding corporate and military derivatives. While this number marked a reduction of 11 units from its 2015 total, the company remained comfortably ahead of its main rival, Airbus. Toulouse transferred 685 aircraft to customers last year, in what was a record high for the manufacturer, and an increase from 628 in 2015. 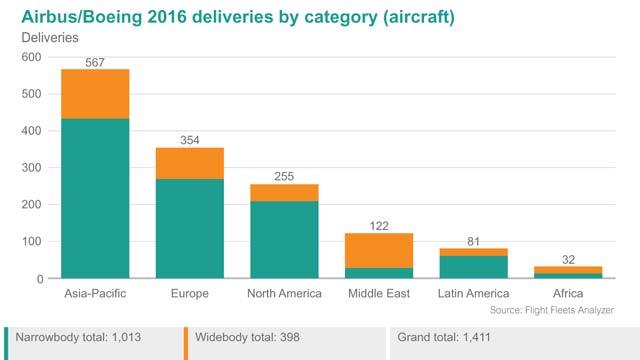 Narrowbody types dominated production in 2016, with 1,020 delivered aircraft accounting for 60% of the total. Here, Airbus had the edge, with 545 A320-family models delivered, including 68 re-engined Neo variants. This positioned the type comfortably ahead of Boeing’s 737, of which 468 were shipped. Bombardier also handed over the first seven examples of its CSeries family during the year, to European carriers Air Baltic and Swiss.

Widebody deliveries represented 23% of all shipments last year, with Fleets Analyzer showing that Airbus handed over 63 A330s and 49 A350s, and Boeing 99 777s and 137 787s. However, the combined total of 398 twin-aisles supplied by Airbus and Boeing represented a 1% decrease from shipments made in this class in 2015.

Data from Fleets Analyzer and full-life base values calculated by Flight Ascend Consultancy show that total deliveries from Airbus and Boeing were worth more than a combined $103 billion last year. Asia-Pacific carriers invested $39 billion of this sum, which, while impressive, marked a $4.7 billion reduction from the previous year. The region’s carriers took delivery of 567 mainline aircraft, with leading recipients including China Eastern (45), Air China (35) and China Southern Airlines (32).

This level of deliveries meant the Asia-Pacific region provided 38% of all business to Airbus and Boeing by volume last year. Europe accounted for 25%, followed by North America with 22%. The remainder was split between airlines in the Middle East (7%), Latin America (6%) and Africa (2%).

FlightGlobal data shows that Boeing retained its lead as the industry’s biggest earner, at $57.8 billion using full-life base values, with its higher-yielding widebodies ensuring that it kept a healthy lead over Airbus, at $45.5 billion.

Flight Ascend Consultancy data shows that Boeing led in all but one of the six global regions last year, with Airbus taking more only in Latin America, where it delivered 62 aircraft, versus 19 from the US producer. 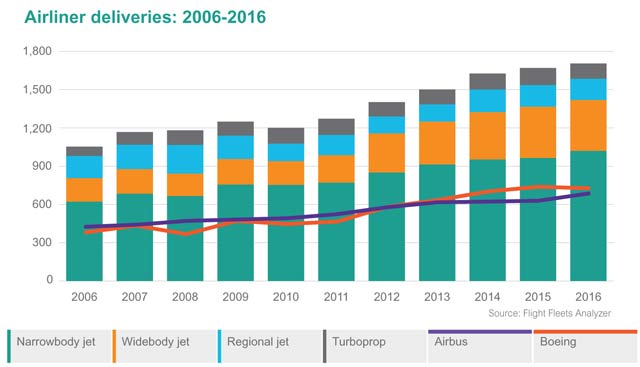 Meanwhile, 286 regional aircraft were delivered: 166 jets and 120 turboprops, with the total inching down slightly from 2015. These represented 10% and 7% of the annual fleet delivery total, respectively.

As highlighted by the commercial sector’s subdued performance at July’s Farnborough air show, net orders in 2016 after cancellations totalled just under 1,600 aircraft – down 30% year-on-year. Airbus fared slightly better than its US rival, taking more than 600 net orders, against 560 to Seattle.

As a result, the industry’s combined orders backlog at year-end declined slightly to 14,702 units: 71 fewer than at the end of 2015. This was the first time the commercial aircraft orders backlog had decreased since 2009.