Cockpit images from the early long test flights of Airbus's A350-1000 in May gave a tantalising glimpse into the performance capabilities of the manufacturer's largest twinjet.

Airbus embarked on a full-scale operational trial of the cabin-fitted aircraft, MSN65, just over three months after flying the jet for the first time, and less than six months after the maiden flight of MSN59, the first -1000 in the three-aircraft test fleet to become airborne.

With a complement of 310 passengers, the aircraft departed Toulouse on 11 May on a circuit around Europe which involved flying east over the Mediterranean Sea to Italy before turning north over Central Europe and tracking towards Scandinavia.

Four hours into the flight, as MSN65 flew along airway Z330 – passing Stockholm Skavsta airport on a course to the RESNA waypoint, which would take it close to Stockholm Arlanda – a cockpit image from Airbus showed the aircraft was cruising at M0.854 at an altitude of 35,000ft.

But it also indicated the Rolls-Royce Trent XWB-97-powered jet had burned 33.3t (73,300lb) of fuel since departure and had 65.5t of fuel remaining on board. The aircraft's cockpit displays showed a fuel flow of 6.8t/h. Its gross weight at this point was just shy of 259t, indicating it had taken off at a little over 292t. 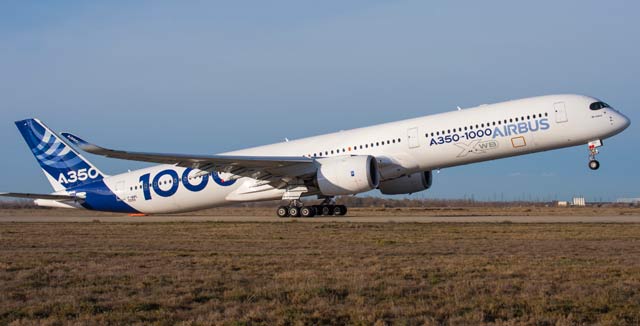 MSN65 returned to Toulouse via the North Sea, the UK and Ireland, and a long loop around the Iberian peninsula. The flight, covering a distance of around 5,400nm (10,000km), lasted just over 11h 30min and served as an initial opportunity to test the -1000 under long-haul airline conditions, with a large contingent of A350 personnel from Airbus serving as passengers, supported by 13 Virgin Atlantic cabin crew members.

Virgin Atlantic is a customer for the -1000, with a dozen aircraft on order set to be delivered from 2019.

Airbus's baseline three-class layout for the -1000 is 366 passengers. Virgin Atlantic says MSN65 was fitted with 295 seats for the early long flight – including 40 in the business cabin, 36 in premium economy, and 217 in economy class. The carrier has yet to unveil the configuration for its own aircraft.

Virgin, whose crews spent several days in Toulouse preparing for the trial, says the passengers "experienced a full onboard service" and the test "put everything from the toilets to the entertainment through its paces", ahead of the upcoming route-proving phase of the -1000 programme.

"Because we're doing it well before certification, it allows us to see, in advance, if there are any issues that need to be fixed," says Airbus senior test pilot Peter Chandler, who led the flight.

MSN65 had been allocated the early long flight detail at the beginning of the test programme, part of some 500h of flight duty concentrated on cabin development and certification as well as extended twin-engined operations.

The aircraft's role in the certification effort, including external noise analysis, has required a relatively light onboard test equipment installation.

In contrast, the other two A350-1000 test airframes – MSN59 and MSN71 – are shouldering the fundamental responsibilities of aerodynamic and system performance.

The overall test programme of 1,600h is some 40% shorter than that for the A350-900, because Airbus has aimed to concentrate mainly on the specific differences between the baseline variant and its larger, stretched sister.

Aside from the 7m longer fuselage the -1000 differs from the -900 in having an extended trailing edge on its wing, six-wheel main landing-gear bogies, and higher design weights – including a maximum take-off weight of 308t and maximum landing weight of 233t.

MSN59 entered the flight-test programme in November 2016. The aircraft has been fitted with heavy instrumentation and its 600h schedule covered initial exploration of the flight envelope and configuration freeze before moving to the routine operational testing of the Trent XWB engines and the flight-control systems.

Rolls-Royce had already carried out extensive testing on the 97,000lb thrust (431kN) engines prior to the -1000's maiden flight, using Airbus's A380 MSN1 testbed.

To support the aerodynamic stability tests, MSN59 was equipped with water ballast tanks enabling a 10t transfer of weight, during flight, between the forward and aft cabins and a 10% shift in the centre of gravity.

MSN59's onboard monitoring equipment featured over 200 types of sensor to capture some 600,000 parameters as part of the data acquisition.

The flight-test station provides the engineers with a representative cockpit view and external video images of critical systems – including high-lift devices and landing-gear – from up to 15 cameras.

But the aircraft also had the ability to transport a flight-test cabin for ground-support personnel and technicians which included 51 seats.

MSN59's test regime covered minimum-unstick testing in March this year, at Istres airport in France. This test assesses the minimum speeds, under certain configurations, at which the A350-1000 can become airborne. It involves rotating the aircraft to high nose-up attitudes, and allowing the aft fuselage – protected with a temporary tail-skid – to scrape along the runway.

The aircraft shares the core testing with MSN71, which first flew on 10 January.

But MSN71 has also undertaken extreme-condition trials, with Arctic-weather exposure testing at Iqaluit, northern Canada, in February – three years after similar work was carried out at the same airport with the A350-900.

During a five-day programme, the aircraft was subjected to external temperatures of -28˚C (-18˚F) to -37˚C, according to the airframer.

Airbus has previously used Al Ain in the United Arab Emirates, during the summer months, to carry out hot-weather exposure tests. The A350-900 flew to Al Ain in June 2014.

Simulated hot-weather conditions were created to perform hot-fuel system and engine tests using MSN71 in early May, at Cardiff in the UK, relatively close to the airframer's facilities in Bristol. 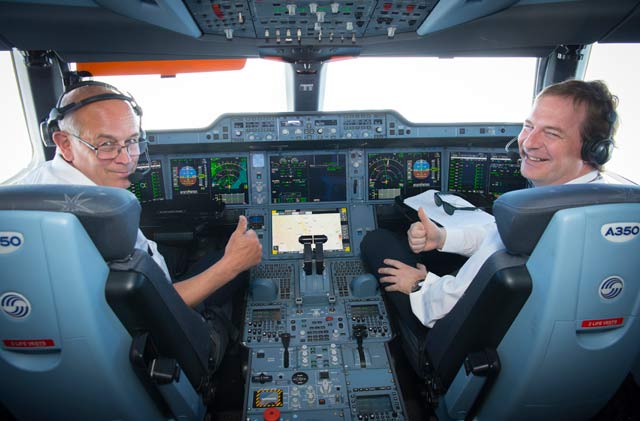 Several Middle Eastern customers are due to take the -1000, among them Qatar Airways which is set to receive the first. Qatar has 37 on order, while Etihad Airways has 22 and new customer Iran Air is taking 16.

MSN71 has already performed warm-weather operational trials at high elevations during a programme in Latin America, where carrier group LATAM is a customer for the -1000.

Over a 10-day period in March, the aircraft was flown to Bolivia, where it performed take-off, approach and landing tests at Cochabamba – located at an altitude of more than 8,200ft – as well as the capital La Paz which, at 9,800ft, is even higher.

The South American trials – which Airbus described as "high-and-warm" operations – also included flights to Barranquilla in Colombia, which lies at sea level.

Ahead of its cabin trials, MSN65 embarked on a series of acoustics tests, towards the end of March, at the Moron air base in Spain. Initial results of powerplant run-up and take-off tests, as well as approach monitoring, enabled Airbus to conclude that the aircraft was "very quiet".

This aircraft subsequently conducted a series of five water-ingestion runs along a heavily-flooded runway at Istres, operating at speeds of 80-140kt.

Airbus says the -1000 performed "as expected". The airframer monitored the runs using an unmanned aerial vehicle which provided video images from directly above the aircraft.

Deliveries of the -1000 are set to commence before the end of this year, if Airbus keeps the certification programme on schedule. The aircraft had secured 211 orders by May, accounting for a quarter of all orders for the A350 family.