Capacity between China and the USA is beginning to rationalise after years of accelerated growth.

Air China, American Airlines, Hawaiian Airlines, Sichuan Airlines and United Airlines will or have pulled out of markets, while others, including Hainan Airlines, are reducing capacity on existing routes through the end of 2018, FlightGlobal schedules data shows.

"The two China routes… have been colossal loss makers for us," said Vasu Raja, vice-president of network and schedule planning at American, earlier in August on the carrier's decision to suspend service between Chicago O'Hare and both Beijing and Shanghai Pudong in October.

The Oneworld Alliance carrier opted to suspend the routes in favour of "focusing" – or rationalising, to put it another way – its Asia operation around its Dallas/Fort Worth and Los Angeles hubs, he says.

Rapid industry capacity growth between China and the USA, especially from Beijing and Shanghai, has put pressure on the market for the past few years.

At least as long ago as January 2016, then-American president Scott Kirby – he is president of United Airlines today – spoke of "weakness" to China due to competitive capacity growth. Despite this, the Fort Worth–based carrier continued to grow in the market adding new service between Los Angeles and Beijing in November 2017.

While data does not yet include all of American and Hawaiian's cuts, China-USA capacity will grow 6.7% this year, FlightGlobal schedules data shows. This is nearly 2.5 percentage points slower than in 2017 and the slowest growth in at least five years. 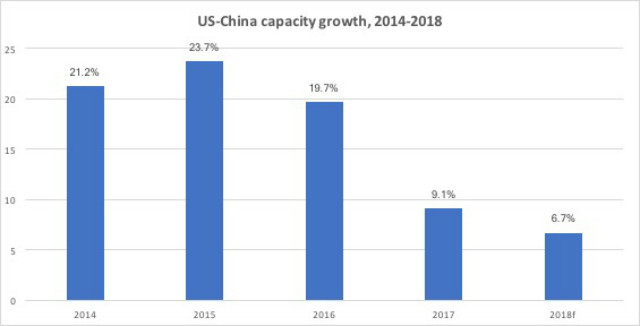 The market is restricted by a bilateral that sets a cap on the number of flights between Beijing, Guangzhou and Shanghai, and US destinations for both Chinese and US carriers. Second tier Chinese cities have a higher cap, and service from third tier cities is unlimited.

All of the tier one frequencies for China's three largest cities are allocated to airlines.

"We believe the elimination of these losses is very positive," wrote Helane Becker, an analyst at Cowen, on American's decision to suspend its two China routes from Chicago.

According to Raja, eliminating Beijing and Shanghai flights will single handedly boost its margins at Chicago O'Hare to "well in excess to system average" from around that average.

American's decision to focus on Dallas/Fort Worth and Los Angeles plays to where it has strengths – at least for China demand. The former is a fortress hub where it can drive significantly more connectivity than over Chicago, and the latter benefits from strong local demand for service to China service.

"Cutting the losses and reallocating aircraft to markets of strength should drive an improved earnings outlook," says Becker.

Hawaiian will likely see a similar financial benefit. The Honolulu-based carrier, while repeatedly saying that it sees China as a large source of future demand to its namesake islands, says the Beijing flight just did not mature at "the speed we anticipated".

“These decisions are never easy and this one is especially difficult because we believe in China’s future as a robust market for the Hawaiian vacation experience," says Peter Ingram, chief executive of Hawaiian, in a statement.

Even Air China hopes US demand for travel to China will improve, says its vice-president for North America Zhihang Chi told FlightGlobal at the Boyd Group International Aviation Forecast Summit on 21 August. The carrier, unlike its US competitors, attributes its decision to suspend San Jose to operational issues with its Boeing 787 fleet and elevated fuel expenses, and not to competitive capacity pressures.

The China-USA market is rebounding. Airlines say yields are slowly improving after years of downward pressure, though they are not back to where they were prior to the recent spate of capacity growth.

"China has rebounded for us," said Kirby as president of United at the Boyd forum on 21 August. He added that demand in Beijing and Shanghai was beginning to catch up with supply in the market.

The Star Alliance carrier has cut three routes to China – Guam to Shanghai, and San Francisco to Hangzhou and Xi'an – since the summer of 2017. It has fallen behind Air China as the second largest carrier in the market with a 17.4% share this year, schedules show.

Airports already see the opportunity presented by the available Beijing and Shanghai frequencies. While American says it will seek a dormancy waiver for its two daily flights – other airlines can challenge those requests – Hawaiian will return its frequencies and United already returned the ones it held for Guam.

"The good news is there are unused [Beijing and Shanghai] frequencies on the China and US side," says Yil Surehan, vice-president of airline business development at Washington Dulles operator the Metropolitan Washington Airports Authority (MWAA), on the prospects of the airport landing a new nonstop to Shanghai.

Asked about the still weak – if recovering – demand between China and the USA, which prompted frequencies to become available, he says: "We have a very strong business case."

Washington will not be alone. Many large US airports have a business case for a new China flight, including Denver and Las Vegas. The question is if airlines will want to fly them.

US carriers are focused on serving China from hubs and key gateways, like American at Dallas/Fort Worth and Los Angeles. United, with a hub at Washington Dulles, would likely be the only US carrier interested in serving Shanghai from the airport but Chinese carriers have been more willing to serve a greater variety of US airports.

With the liberalisation of China's "one route, one airline" policy coming in October, this opens the door to more markets for Air China and other carriers with the remaining Chinese frequencies.

The fact that airlines are now willing to enter and exit China-US routes, instead of sitting on them to simply hold onto frequencies, shows a newfound level of maturity in the market.