For more than 40 years, the guidelines governing slot allocation at the world's capacity-constrained airports have been overseen by IATA and a set of national co-ordinators. Now, airports are seeking to challenge the status quo by gaining a say in how slots are awarded and – potentially – who benefits from their value.

Allocation of slots at congested – or "slot co-ordinated" – airports has since 1974 been guided by a set of best practices dubbed the Worldwide Slot Guidelines (WSG).

The WSG covers everything from how new slots should be awarded to the timeline for the process, airlines' right to keep control of slots based on historic precedence, and the 80:20 rule that allows carriers to retain slots as long as they use them 80% of the time allocated during a particular season.

While the guidelines are voluntary – and the USA, for example, operates to a slightly different system – the WSG is widely accepted as the industry standard. The European Union's current slot regulations are a virtual mirror of them.

IATA data shows that there are more than 300 airports worldwide that are subject to the WSG.

A total of 189 airports in 2017 were defined as "co-ordinated" or Level 3, a status in which the scale of congestion is such that a national co-ordinator must impose a schedule on airlines operating at peak times.

Some 120 airports are defined as "facilitated" or Level 2, meaning that congestion does occur at certain times of the day. Slot allocation at these facilities is carried out on a voluntary basis, with the co-ordinator seeking to reach an agreement with airlines on future flight schedules.

As global passenger traffic has increased over time, so have the number of airports that require some form of slot co-ordination. In 2011, there were 142 Level 3 airports; by 2017, this had risen to 189. IATA predicts that this number could grow by 100 airports within the next 10 years. 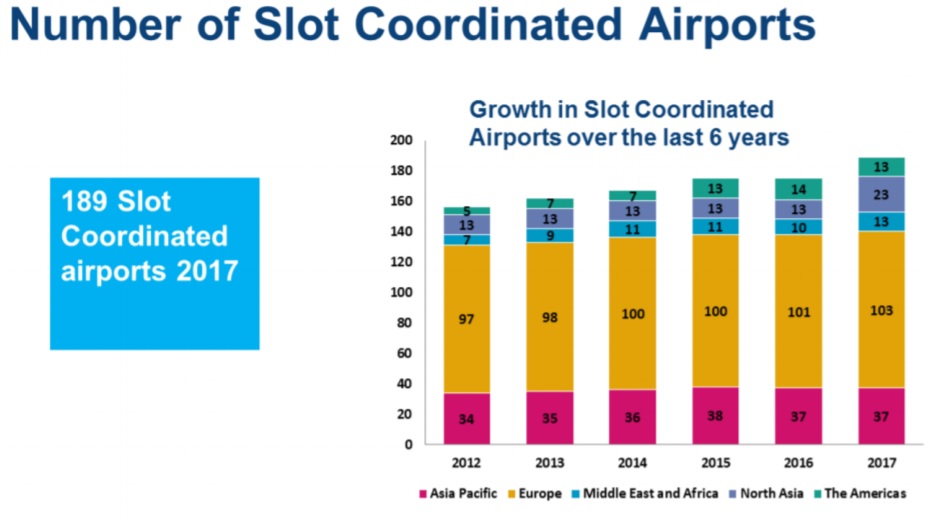 While slot allocation has a direct impact on the operations at their facilities, airports have no formal involvement in how the guidelines are defined and executed – something that lobby group Airports Council International (ACI) is seeking to change.

The way slots are divvied out to airlines has long proven to be a controversial process, with critics complaining that the process lacks transparency. The European Commission has committed to a review of the current slot protocols within its aviation strategy, although no conclusion has yet been reached.

During the ICAO general assembly in 2016, ACI set out a critique of the current system and asked the UN body to consider reviewing it.

Subsequently, IATA, ACI and the WWCAG – the trade association that represents national slot co-ordinators – have embarked on a joint strategic review of the WSG.

The review will seek to address "any deficiencies in the slot allocation system" and ensure that the guidelines "evolve and remain viable for years to come", say the three organisations in a joint statement.

"Capacity is not used to its optimal ability," ACI director general Angela Gittens told FlightGlobal during the trade body's Airport Economics & Finance Conference in London in April, "so we are working with IATA and the slot co-ordinators group to conduct a strategic review, and we will be reporting to ICAO in 2019."

Gittens says the WSG as it now stands is "outmoded" because it was drawn up under a "completely different set of circumstances" when the majority of airlines and airports were state-owned.

"When it was set up, airlines were national airlines, airports were government-owned, and so you had the national government through the airlines [and] the airports looking out for the interests of the consumer and the travelling public," she says.

With the vast majority of airlines, and many airports, now privately owned, Gittens asks: "Who is [now] looking out for the consumer?"

Stefano Baronci, ACI's director of economics and programme development, says that while he hopes the review will be "constructive", there could be "resistance" arising from "a vested interest of some airlines to keep the status quo".

Fraport's head of airport slot management Gunter Heinrich tells FlightGlobal that the scope of the review is more limited than he would have wanted, being focused on the "details" of slot allocation, such as whether a new fourth level of co-ordination is required or whether the 80:20 rule should be replaced with a 70:30 rule.

The principles underpinning the allocation of slots are not covered, he says.

"The problem is, it is an IATA system; it is not taking into account equally the interests of the other stakeholders," Heinrich complains. He estimates that 50% of air traffic in Europe is carried out by non-IATA members.

Heinrich says that for some time airports have been seeking some form of representation on the Joint Slot Advisory Group (JSAG) – a 14-member body split between IATA member airlines and slot co-ordinators, which meets to oversees the guidelines. To date, that request has been "refused" by IATA, he says.

Lara Maughan, head of worldwide airport slots at IATA, tells FlightGlobal that to date there has has not been much input from airports in the WSG and it is therefore "quite right" that a review of their involvement should take place.

She acknowledges that the current guidelines were put in place to act as "sticky plaster" for the wider problem created by the lack of available airport capacity, but says IATA's starting position is that the current rules are "good as you can get", and the review is "not about change for change's sake".

IATA is "not looking for radical reform of the slot process today, because we do not see it as a problem", she stresses. The association is keen to see an "evolution" of the current system, rather than a radical rethink.

More than 80 people, including IATA members and nonmembers, are involved in the strategic review, which is split into four working groups. Maughan sees reasons to be "optimistic" that a good outcome can be achieved.

IATA describes the guidelines as a "living document" which is regularly reviewed and altered where and when this is deemed necessary. Maughan describes the association as the "custodians" of the WSG.

Richard Cann, head of co-ordination at UK slot co-ordinator ACL, tells FlightGlobal that he welcomes the review but says the current guidelines, far from being broken, "essentially work".

He adds: "Is it perfect? No, it is not perfect, but there is a perception that there needs to be a better balance between the interests of the airlines and the airports, which the strategic review could address."

Cann says he can understand why ACI is now keen to overhaul the process as airports around the world get busier.

Heinrich says that while slots' ownership is not under discussion as part of the strategic review, separate bilateral talks on this topic are being conducted by the heads of ACI and IATA. Ultimately, ICAO may need to become involved in the issue, he adds.

IATA's Maughan contends that ICAO member states do not wish to get directly involved in slot allocation.

IS THE CURRENT SYSTEM WORKING?

He adds: "Consequently, we are in a place now where we have some enormously strong vested interests and we have a rapidly approaching capacity crunch."

Norwegian's head of international government and industry relations John Hanlon believes the current guidelines are as good as can be expected in an imperfect world. Some could be "tweaked" to avoid under-utilisation, he says; but he defends both the WSG and IATA's oversight of it.

"To its credit, I think, IATA is seen as the supporter and the initiator of that scheme of the guidelines. We are not an IATA airline; we are a new entrant which people describe as being disadvantaged by the slot guidelines. We actually favour them," he says.

Hanlon says the issue is not so much the current slot guidelines but the lack of new airport capacity.

Diarmuid O'Conghaile, head of regulation at Ryanair, believes a lot can be done to improve the existing regime, especially to iron out inefficiencies in slot allocation that create discrepancies in the capacity on offer at different European airports.

The way that interest is expressed in slots, how they are awarded and returned, and the deadlines at each stage of the process are all open to abuse, O'Conghaile argues.

An area that is not under discussion as part of the strategic review – but which stirs much of the controversy around the current system – is the ability of an airline to swap, lease or sell their slots for what can be significant sums of money.

The WSG state that slot swaps between airlines are to be "encouraged" and can be carried out for "compensation or consideration" where local laws do not prohibit the practice.

IATA's Maughan says that currently the UK is the only country that has the "legal mechanisms" in place to allow for such secondary trading.

The sales last year of two Heathrow slot pairs by SAS to American for $75 million and of one by Croatia Airlines to Delta Air Lines for $19 million indicates the potential value of slots as assets. 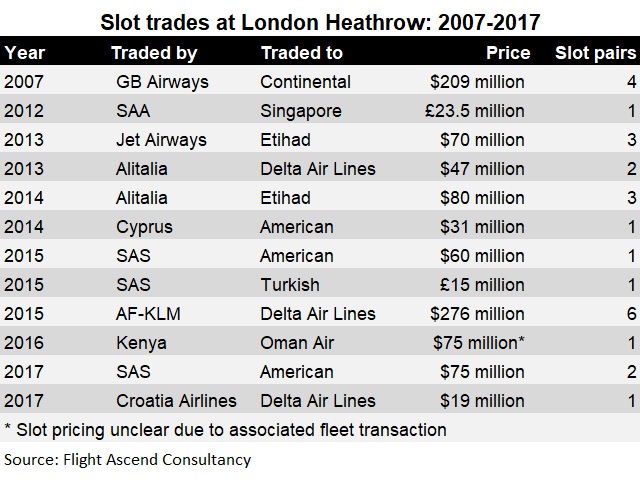 ACI's Gittens describes this as a "Kafka-esque situation" where "someone is given something for free and can then sell it for hundreds of millions of dollars".

Barconi says that a "sensible option" would be "to allocate some of the proceeds of the secondary trading for infrastructure development". This, he says, would potentially allow airports to then reduce airport charges, but is "opposed" by IATA.

An alternative to slot sales on a commercial basis is slot auctions organised by the sovereign states. China conducted one in 2015, and Mexico has passed legislation allowing for the practice.

Maughan says auctions "raise a lot of questions" and points out that while Mexico allows airports to legally auction slots, none have so far taken place, while China has conducted only that first auction.

Speaking at the ACI conference in London in April, Stuart Holder – senior regulatory policy adviser at the UK Civil Aviation Authority – said there was scope for a "real improvement" in the transparency of secondary trading in the UK, including "a lot of things" that could be done to the "existing primary mechanisms".

He warns that alternatives to the current system could prove "really difficult", noting the logistical "nightmare" involved in organising slot auctions. Norwegian's Hanlon similarly opposes auctions on account of the disruption they can cause.

Chris Bosworth, former managing director of ACL, says that the case of Monarch Airlines, where the administrators KPMG were able to sell slots after the carrier had grounded flights, illustrated that the rules on slot trading may need to be reviewed.

"In light of events following recent failures, including Monarch, Air Berlin and Niki, regulators may also be looking for greater clarity regarding what happens to slots in the event of an airline going into administration," he says.

While it will be more than a year before any final recommendations on reforming the existing slot regime are reached under the current review, its scope alone means it is unlikely to satisfy the demands of the airports.

An earlier version suggested that the WSG had been in place for 50 rather than 40 years. This has been corrected